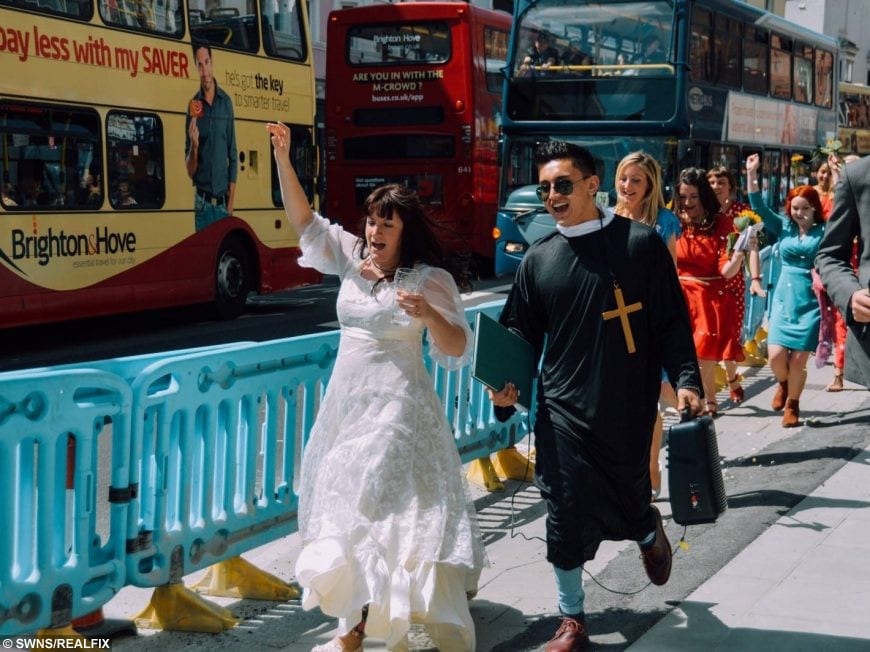 A woman celebrating her fourth wedding anniversary and has written a book to explain the lifelong commitment she made – when she married HERSELF.

Sophie Tanner wore a vintage gown with a bouquet of sunflowers when she tied the knot to herself.

The 40-year-old stood before her friends and family and promised to love, honour and obey herself, when she tied the knot on Brighton sea front.

But now, four years later, Sophie, who doesn’t call herself ‘single’ because she’s married, is writing a book about living and loving herself.

Self-love advocate Sophie, from Brighton, said: “Obviously it was tongue-in-cheek but when I said my vows promising to love myself, it really was quite powerful and everybody said they had goosebumps.

“I had my first kiss where I had my arms around myself and then we danced down to the beach for a Pimms reception.

“My friends and family were all on board and it wasn’t a massive surprise.”

Sophie was inspired to make the lifelong commitment to herself when she realised she did not need another person to feel happy after a string of failed relationships.

She said: “When I turned 30, the reason the idea came to me was I had been through quite a bad break up.

“I had been cheated on for the third time and it really knocked me more than other break ups.

“I am usually a very happy and confident person but I could not help blaming myself thinking I was not enough.

“I spent a few months which were the worst I ever had spiralling down with my mental health.

“Then I woke up in bed one morning and had a massive sense of relief where I could feel my optimism returning.

“I realised I am not the loser in this, he is. I actually love my life and I love myself and I felt very grateful.”

She added: “Romantic love is so talked about but nobody really talks about that love of yourself.

“I remember thinking I wish there was a way to celebrate this feeling of having myself back and loving yourself.

“When you are single, there is this unspoken sympathy and idea of ‘don’t worry, someone is just around the corner.’

“But I was happy by myself and I had this idea of this self marriage.”

Sophie wrote to Brighton and Hove council who refused to make her marriage legally binding because it was not a union of two people, to the exclusion of anybody else.

Her agent also turned down her idea for a new book where a woman got married to herself because she did not think there was a market for her concept.

Sophie said: “She said it does not fit the rom-com element and I laughed and said that is kind of the point.”

Despite several set backs, Sophie arranged her own illegal ceremony in May 2015 to celebrate her sologamy.

Four years on, she is set to launch her new self-love book titled ‘Reader, I Married Me’ on May 18 which marks her fourth wedding anniversary to herself when she will also be renewing her vows.

She hopes to get an eternity ring to wear at the ceremony when she will dance to ‘This Is Me’ from The Greatest Showman with her very own flash mob on Brighton seafront.

Sophie said: “Four years ago I was taking my vows to embrace my dreams and one of my biggest dreams to write a book has now come true.

“So this will be a chance for my friends and family to join me and celebrate.

“I hope to get an eternity ring or a ‘ringle’ as it’s called by the character in my book which she gets engraved on the inside with ‘I complete me.’

“She wears the ringle to celebrate her singleness to show she is whole and does not need anybody else to complete herself.”

Sophie added: “It was amazing to write the book. After the ceremony, it all went a bit bonkers and everyone was quite intrigued the more people started to talk about it.

“It has been such a long and convoluted journey and getting it all down on paper and having my chance to explain what I have done is great.”

Although Sophie said her book is completely fictional, protagonist Chloe Usher follows her journey towards loving herself.

While Sophie has dated since her wedding to herself in 2015, she is still happy being single and will only enter into a relationship with somebody that completes her life.

She said: “I am a romantic and I am open to finding love but I am also really happy as I am.

“I love romance films as much as anyone but self love should be as important so we are not putting all our eggs into one basket of finding the one.

“Because I have made these vows to myself, I would only really go with someone who really completed my life.

“If a guy gets scared of it, then they don’t get me so it is quite a good filter. If they get it, they get me and that’s wicked.”