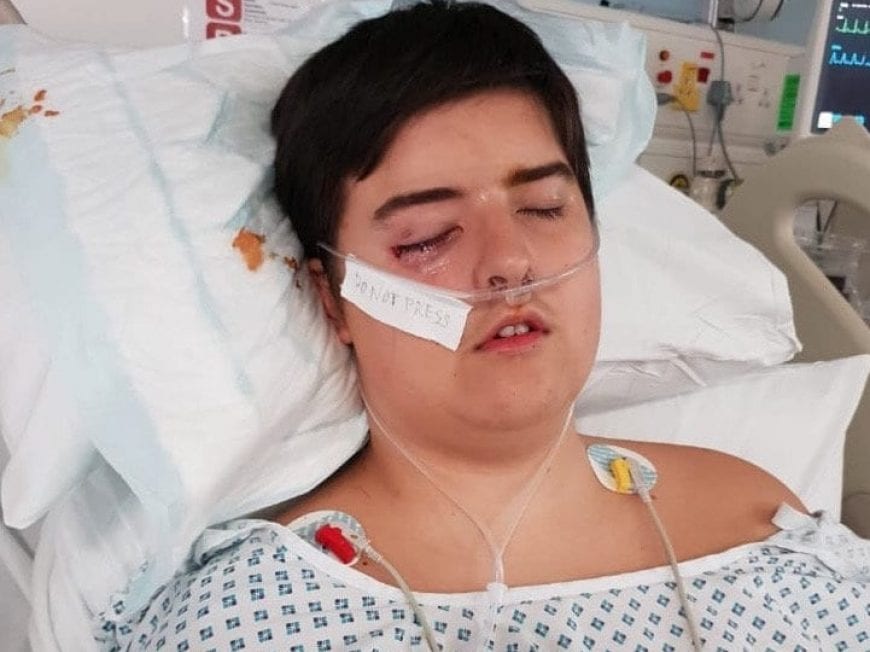 A 14-year-old who was minutes from death after cracking his head in a horror car crash was saved by the BMW he was travelling in – which automatically dialled 999.

Bradley Duke was in the backseat alongside his brother Hayden when their mum, who was driving, slid on black ice and lost control of the vehicle at 55mph.

In the horrendous smash, schoolboy Bradley suffered devastating skull and spine fractures which left him fighting for his life in the footwell of the car.

Mum Claire Duke, now 40, was rendered unconscious as a result of the collision and woke up to the sound of an unfamiliar voice coming from the dashboard.

The female voice told her, ‘we know where you are and help is on its way’, but Claire didn’t realise the crash had triggered a BMW safety feature.

She was frantically searching the car for her phone, which had got lost in the collision when a road and air ambulance arrived at the scene.

“I was in a state of complete panic, I had no idea what to do,” Claire said.

“The seriousness of the situation still hadn’t kicked in because of the shock.”

Paramedics managed to save Bradley’s life with just seconds to spare before flying him to hospital, where he was placed into intensive care and a nine-day coma.

Claire later discovered emergency services were deployed to the crash scene by a safety feature in her 2014 BMW 3 Series which sends for help when the airbags go off.

The mum-of-three – who also has an eight-week-old daughter, Sienna, now says the technology “saved Bradley’s life”, after doctor’s revealed Bradley would have died if had he been treated just minutes later.

“He would not be with us now if it weren’t for that safety feature in the car,” she said.

“If he had been lying there for just a few moments more he would have died.”

The crash happened on a rural Sheffield road on the morning of January 13, 2017, as Claire drove Bradley and Hayden, who was then nine, to school.

The business manager was driving down a hill when she began losing control of her car.

“I was trying to pump the brakes and put the handbrake on but nothing would work,” she said.

“When I realised what was going to happen I felt sheer panic and shouted out to the kids ‘we’re going to crash’.”

Claire and Hayden only suffered minor injuries in the crash and the nine-year-old, who also didn’t realise a safety feature had been triggered, ran from the scene to get help.

A police report found Bradley suffered much more serious injuries because he removed his seat belt moments before the smash, which Claire thinks he did out of sheer panic.

Claire said: “When I woke up I was really confused because there was a woman’s voice speaking, I thought maybe I had rung someone by accident.

“It was saying, ‘we know where you are and help is on its way’.

“I looked back and saw Bradley slumped in the backseat so went to check on him, I could tell he was hurt but I thought he had probably just bumped his head.”

Claire added: “I was scrambling around for my phone so that I could call for help but I couldn’t find it.”

She first realised how seriously injured Bradley was when she saw that a piece of his skull was missing and that his flesh inside was exposed.

Claire said: “That’s when the fear really kicked in, I had no idea what to do. I was panicking.”

She added: “I still wasn’t sure that help was on its way.”

Claire was sitting with her son in the backseat when a paramedic arrived and took over, followed by an air ambulance and the police.

He was placed in an induced coma on the road before being flown to Sheffield Children’s Hospital in an air ambulance and taken straight to theatre for brain surgery.

Claire and her partner Mark Szalmer arrived soon after.

“A doctor spoke to us and said they couldn’t give us any guarantees, I just went into shock,” Claire said.

After coming out of surgery Bradley, who is now 17, was placed on a life support machine and the family agonised over whether or not he would survive.

“It was such a traumatic time, I couldn’t stop blaming myself and asking whether I should have made the car journey that I did,” Claire said.

After nine days in hospital the family were overjoyed when Bradley finally woke up, although it was just the beginning of a long recovery process.

He spent a month in hospital and, after being discharged, he had to relearn many basic skills like reading and writing, which he had lost as a result of the head injury.

Although Bradley’s rehabilitation still continues today, Claire says he is “almost back to his best”.

The 17-year-old said: “I don’t remember anything about the crash, I blacked out.

“The first thing I remember was waking up in the hospital with wires everywhere.

“I had to ask my family what had happened because I didn’t know.

“I was scared but really thankful to be alive.”

He added: “I feel very lucky, if it wasn’t for the technology in the car and the doctors in the hospital, I wouldn’t be here today.

“It’s amazing what the technology can do. Nobody knew the car had that feature.”

A BMW spokesman said when the airbags are set off in an accident, BMW will call the car via its onboard SIM card.

If it gets no reply from the passengers, emergency services are deployed to the crash scene immediately.

The spokesman added: “We are so delighted that Bradley and Claire are fit and well after their awful crash.”

Bradley has since taken part in a fundraising drive to raise over £500,000 for a helipad at Sheffield Children’s Hospital, which is where he was flown to and treated after the crash.