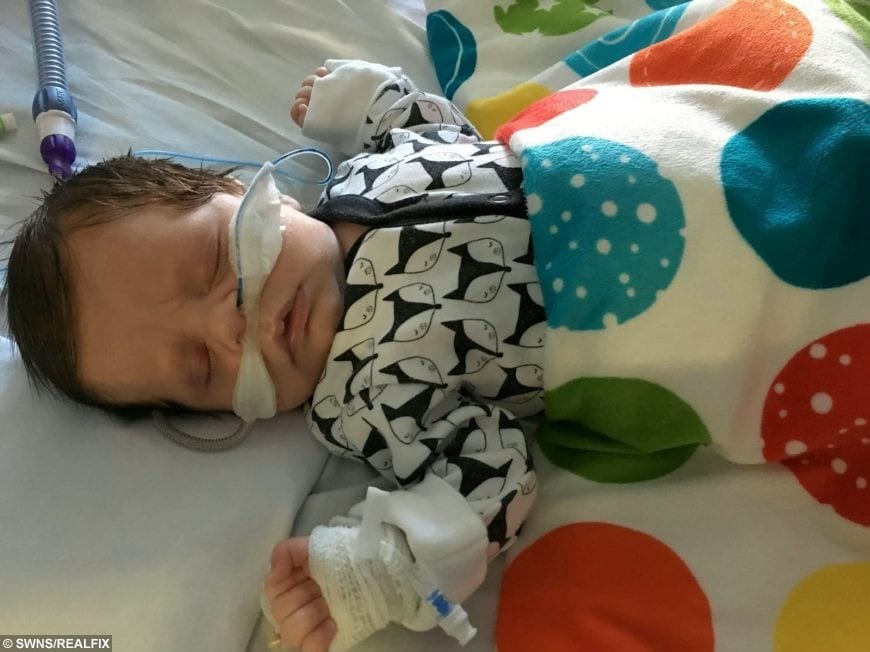 ‘Here you go Mrs Smith, your beautiful baby boy,’ the nurse said as she handed my newborn son over to me.

‘Isaac,’ I cooed, as tears ran down my cheeks – I couldn’t believe he was finally here.

Isaac, now 14 months, arrived on November 20th 2017, weighing 6lb 2oz, but he was born with difficulty breathing so was rushed off to intensive care at Sunderland Royal Hospital.

After an agonising 11-hour wait, I was finally able to hold him.

My husband Steven, 37, and I had never smiled so much – our little family was finally complete.

The first couple of weeks went by in a blur with endless visits from family and friends.

We loved showing Isaac off to everyone and he loved the attention and cuddles, but it meant we barely got a minute to enjoy him for ourselves.

‘That sounds perfect,’ I said. ‘We definitely deserve it.’

So when Isaac was just six-weeks-old, we took him on his first holiday.

Packing up the car, we set off for the Lake District on Friday January 19th 2018, just two hours away from our home in Sunderland, Tyne and Wear.

Arriving that evening, we settled into our cosy cottage which was nestled in the hills.

‘This is just what we need,’ I smiled down as Isaac as I tucked him into his travel cot.

‘I’m sure it’s nothing,’ Steven said. ‘After all he got a clean bill of health at his six-week check-up on Thursday.’

Steven was right – he didn’t have a temperate and was feeding just fine, so I told myself not to worry – I was every first-time mum felt this way!

His cough didn’t get any better through Saturday or Sunday, but it didn’t get any worse either – so we just kept him warm and enjoyed some time watching films at the cottage.

But on Sunday night as I laid him down to sleep, his cough became unstoppable.

‘It’s only bad when he’s lying down, so why don’t we take it in turns over night to let him sleep on us so he’s upright?’ Steven suggested.

We may have only been parents for six-weeks but we made a really good team and I couldn’t be happier to have Steven by my side.

The night went by with barely a splutter from Isaac, so we knew we’d made the right decision.

But on Monday morning he started again, and having both had a broken night’s sleep from being up with him, we decided to head home a couple of days early.

It didn’t take long to pack our bags and put them into the car, and as Steven did a final sweep of the house I popped Isaac into his car seat.

Our poor baby couldn’t stop coughing and crying by now, and I hated knowing the distress he was in.

‘Mummy and daddy are going to take you home now,’ I tried to reassure him. ‘We’ll call the doctors once we’re on the road to let them know we’ll be taking you in on the way back and they’ll make you better.’

Stroking his head, I was glad to feel there was still no temperature but wanted the doctors to check him over just in case.

But I watched as his screams fell silent and he turned blue within seconds.

Adrenaline coursed through my body and I knew I had to act quickly as Isaac had stopped breathing.

Shouting to Steven, I popped Isaac onto my lap so I could start CPR.

My mind sped back to a first-aid class I’d been to before he was born where I’d learnt how to administer CPR on babies – but I couldn’t do it well enough with him perched on my knees.

Rushing inside as Steven called 999, I put our baby boy onto a flat table.

Although I tried to continue with the CPR my hands were too shaky, so I took the phone and offered instructions to Steven who took over.

‘You’ve got to make sure his mouth and nose are covered,’ I said, trying to stay calm.

I’d identified the spot on his chest where the small compressions needed to be done, and after a couple of rounds our little boy began to cry again.

The whole experience was a blur, but in what seemed like record time, the paramedics had arrived.

They took over and examined him straight away, just as an air ambulance began to hover overhead.

‘Now the helicopter is here, we think it best you go straight to hospital with Isaac as it’s the quickest way down from the Lakes,’ the paramedic said.

They flew us to the Royal Victoria Infirmary, Newcastle, where Isaac was checked over and admitted to intensive care.

Doctors diagnosed him with bronchiolitis – a condition which can develop from passing on a cold – and they explained that symptoms are often no more than a common-cold so we hadn’t missed anything.

We felt unbelievably lucky he was still with us, and after eight days in hospital, finally got to bring Isaac home.

I don’t even want to think what may have happened if I hadn’t been on the babies and toddlers first-aid class run by the St John’s Ambulance.

They run them nationwide at local venues, and highlight risks parents may encounter, as well as teaching you what to do if anything should happen.

It took just two hours of my time back in October 2017 before Isaac was born, and is quite literally the best £20 I’ve ever spent – without it I wouldn’t have my little boy with me now.