A 23st woman who was driven to depression by a vicious bullying campaign hit back at her tormentors by losing almost half her bodyweight.

Morbidly obese Hope Desroches, 36, was cruelly taunted by “athletic barbies” in her teens who threw rubbish at her and screamed “fat cow” whenever she walked past.

Mum-of-two Hope was so lonely she resorted to phoning an on-air DJ at a local radio station every night so she had someone to talk to.

She self-harmed and comfort ate to excess, gorging on family-size lasagnes, countless candy bars and boxes of cookies washed down with ten cans of fizzy drink a day.

It was only after size 28 (UK) Hope attended therapy that she began to understand the side of her that “binged” and “didn’t care”, and she started making small changes.

Now the 5′ 6” marketing consultant has dropped 11st from 23st to a healthy 12st, wears a size 14, hikes six miles every day and feels “amazing”.

Inspirational Hope, of California, US, said: “Before when I looked in the mirror I was disgusted with how I looked.

“Now I feel a million times better and I’m more confident. I always wanted to be able to wear dresses and heels and look pretty-now I can.

“The bullying was relentless. It was really really hard for me as a kid and it made me feel like less of a person. I didn’t deserve it.

“It took so long for me to get to this point, but I forgive them.

“I did this for myself and I couldn’t care less about what they think of me now. I don’t need their approval in any way.

“I’m so proud of how far I have come. feel victorious.”

Hope said she was always the heaviest kid in her class and she faced “non-stop bullying” as a youngster.

She said: “I went to a private school and I was immediately rejected. It was the kind of place where everyone was a barbie and athletic and I weighed 250lbs (18st).

“The day I went to my first football game I was standing at the bottom of the seats and about 30 people started chanting ‘fat cow’ at me and throwing cans of drink and trash at me.

“It was a really terrible experience.

“Boca means ‘cow’ in Spanish every time I walked down the corridor that’s what everybody called me. They screamed it at me.

“It made me really really depressed and I would cut myself.

“I felt like such a loner. I could never meet people so I started calling DJs on radio stations.

“I had this one I would talk to everyday. He felt like my only friend from the age of 12 years old.”

Hope’s weight continued to spiral out of control, even when she met husband Johnny, 37, 13 years ago, and she piled on more pounds when she had daughter Regan, 11, and son Malcolm, nine.

Hope said: “I would eat whatever I could find. For breakfast, instead of eating a bowl of cereal I would have a big meal – maybe leftover pizza or something.

“I’d eat a family size lasagne for lunch and for dinner we would eat out a lot. I always had a desert as well-a pint of ice cream and a full box of cookies.

“I drank a lot of Sprite and Dr Pepper and I would never check out at the grocery store without grabbing a couple of chocolate bars.

“At that point I was feeling depressed and had anxiety. I had no self-confidence. I didn’t care about myself.

“It impacted my ability to do things with my daughter in a way. I just didn’t have the energy to take them to the park and things like that.

“I would sit on the bench eating snacks. Then I would feel guilty about being so fat, and then I would binge.

“I hated my body. I would cover up with baggy tops and pants. I despises everything about myself.” 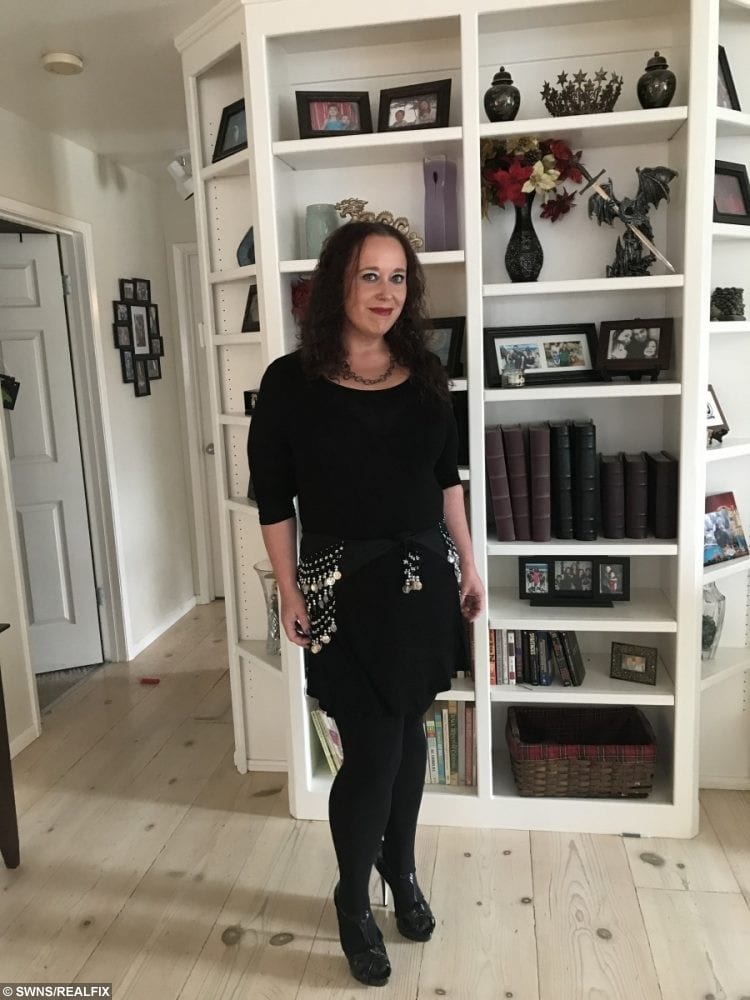 In September 2015, Hope started going to therapy which she said helped her to understand “the side of me that binged and didn’t care”.

By January 2016 she had begun making small changes like going for short walks and cutting her portion size, which helped her shed four stone in a year.

At the start of 2017 she started limiting her daily calorie intake to 1,700 and walks turned into daily three mile, and then six mile, hikes.

She lost almost seven stone since the beginning of the year and now wears a slim size ten.

Now she’s trying to get together $100,000 for surgery to remove the excess skin where she lost the weight and she plans to become a health coach.

Hope added: “I’m so proud that I have come this far.

“When I’m hiking one of the things I love is that no one is around to watch me cry happy tears.

“There are so many times when I’ll be pushing myself to do things I never thought I would be able to do before and I will cry because it feels so amazing.”

Dog That Had Ears Chopped Off As A Puppy Gets New Home!