A 51-year-old who suffered a fall had to wait more than three hours for an ambulance – which never turned up.

Andrew Hamilton had been out walking his dogs a mile from home when he slipped in a muddy field in his new “substandard” boots a few weeks ago.

He was found by another dog walker who called an ambulance and was allegedly assured one was on its way at around 3.30pm.

But the wait turned from minutes into hours and married telecoms worker Andrew was left writhing in pain in the freezing cold.

In that time, police had been dispatched to the scene and a local GP even came after her shift finished to check on him to see if he could be moved.

Andrew, from Edgworth near Blackburn with Darwen, Lancs., was eventually hauled onto a piece of tarpaulin and driven to Royal Blackburn Hospital in the boot of a 4×4.

On admission, Andrew was examined where it was determined he had torn the muscles in his left thigh.

He was kept in hospital for eight days and will need to wear a straight leg brace for the next two to four weeks.

Andrew said: “It was a really daunting experience thinking that nobody was coming to treat me and take me to hospital.

“As far as resources are concerned, it is a bigger question but they have to make it clear and say an ambulance isn’t coming.

“I wasn’t waiting in a restaurant, I was in a field shivering. It was early February and we had just lost the snow. Luckily, it’s a popular walking route.” 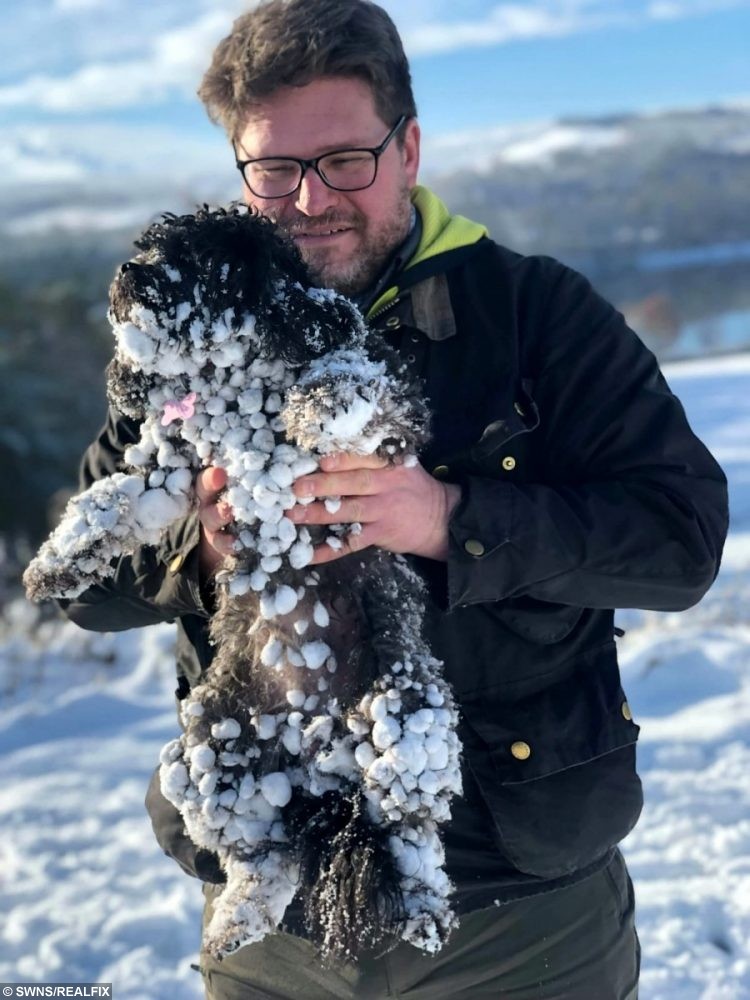 Andrew had been out walking his two dogs Chad and Skye, as well as his daughter’s pooch when the accident happened.

He said: “I fell after slipping on a muddy downhill verge. I was in so much pain and couldn’t move.

“My three dogs were running loose around the field and I was just hoping it wouldn’t be long until someone came across me. After a short while, another walker found me.

“Before long a group of around 10 people had gathered, giving me their coats so I could keep warm.

“By this point I had been lying in the mud for around two hours and it was starting to get dark. There was still no sign of an ambulance and I still couldn’t move.

“The plan was to get me to the main road, call the ambulance again and hope that they appeared. It had been two-and-a-half hours by this stage and I was really beginning to lose hope.

“I couldn’t stand, so I was lifted onto a big sheet of tarpaulin and carried to the main road by a helpful group of locals, but there was still no ambulance.

“I was desperate at this stage and shivering uncontrollably, the pain was penetrating my bones. I needed to get to the hospital as soon as possible.

“I really want to thank all of those who went out of their way to try and keep me warm and for keeping my spirits up.”

A spokesperson for North West Ambulance Service said: “We always try to get to patients as quickly as we can, but sometimes there are more emergencies than there are ambulances.

“When this happens, patients in life-threatening situations are prioritised.

“Unfortunately this was one of those occasions and it meant that Mr Hamilton was waiting longer than we’d like.

“We would never intentionally leave anyone waiting for our help – there were simply no ambulances available to send.

“We are sorry for any distress caused and would like to thank the police and local people who kindly helped to get Mr Hamilton to hospital. We wish him a speedy recovery.”