73-Year-Old Woman Is Treking An Incredible 1,000 Miles Around The UK – On Horse And Cart

A 73-year-old woman is treking an incredible 1,000 miles around the UK — on horse and cart.

Retired Daisy Sadler has travelled around 600 miles so far on her round trip from her home in Banbury, Oxfordshire, to the Kelpies in Falkirk.

Daisy was inspired by the tragic story of Imogen Whitby — a two-year-old from her hometown who died of a brain tumour in 2017 — to raise money for charity.

Her feat of endurance, on the UK’s minor road network, has raised almost £13,000 for the Brain Tumour Charity so far. 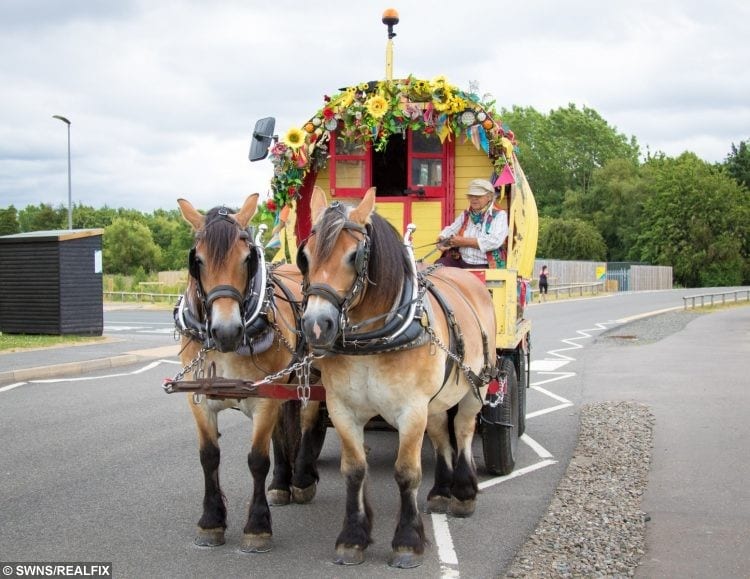 Joined by her two faithful Belgium draft horses and four-year-old dog Tad, Daisy has now spent more than 100 days on the road.

The horses, Olive, 13 and half-brother Arthur, 11, weigh nearly two tonnes between them and have lived with Daisy since they were imported from Germany in 2013.

Daisy finds a grassy area to pitch up each night, putting up electric white tape to keep Olive and Arthur safe and close by.

Daisy, who lives in Oxfordshire with husband Josh, says she started the journey because she “wanted to aim for something worthwhile, whilst I’m still able”. 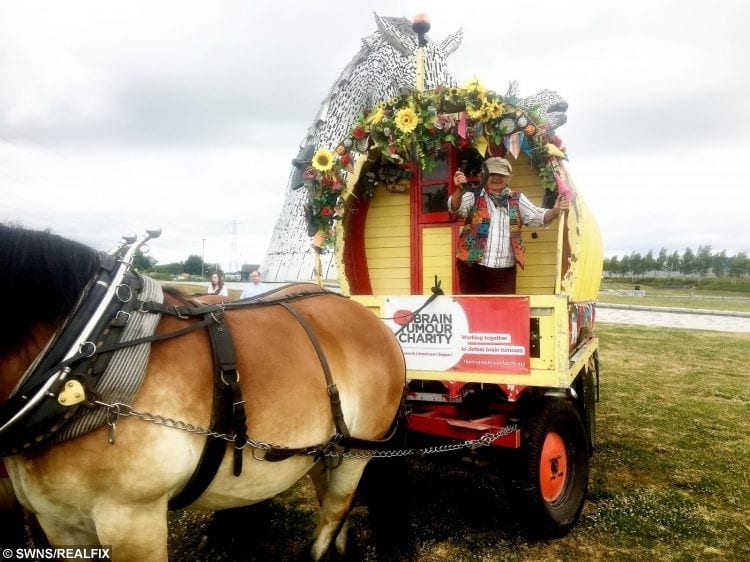 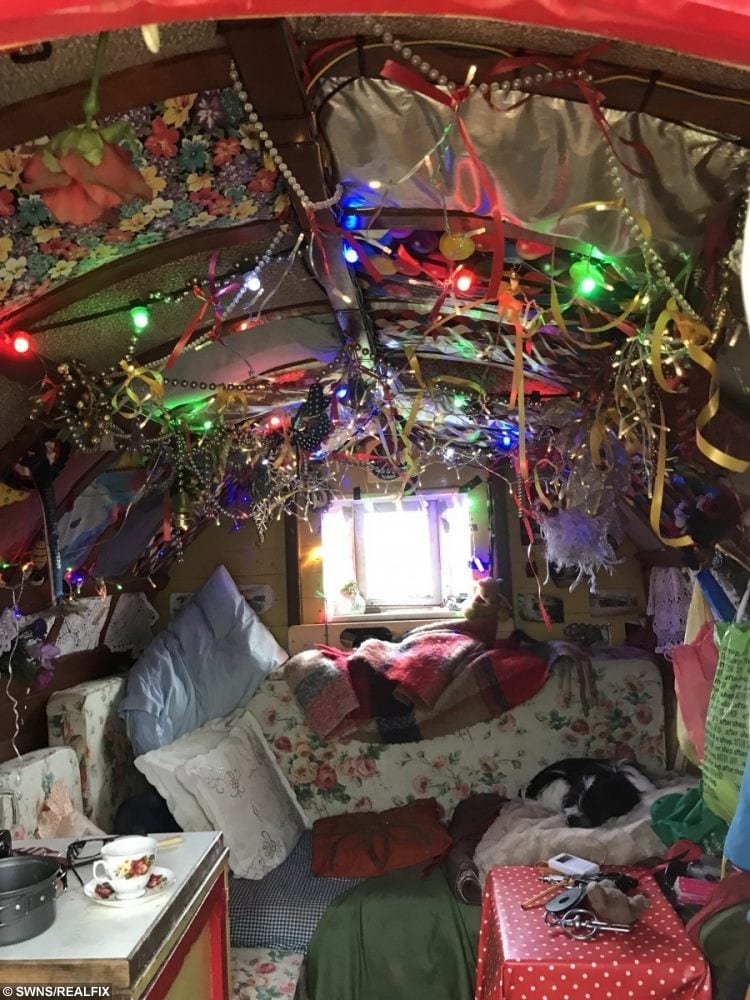 She said: “I didn’t know Imogen’s family but her story inspired me to do something to raise money to help people with brain tumours.

“I had the wagon and the summer to myself so I decided to get up and go.

“I didn’t really make any solid plans, I have had the wagon for the last 20 years and it’s perfect for one person, so I decided to go for it.”

It’s not the first time Daisy has travelled across the country via horse and cart, in 2015 she travelled from Banbury to the Lake District, a trip which took 10 weeks to complete.

Daisy said: “The horses are good, they are looking well — although I can’t say how much they are enjoying it and the heat has been hard on them at times.

“I carry their food and water with me for them and then I just get top-ups on the way around. People have been so generous.

“I like to try and be on the road after rush hour and off again for the night around 3pm.

“I have been living on mountain climbing food – the packet food where you just add water and then you have shepherds pie.

“I’m not sick of it yet, I have been getting lots of homemade goods along the way.” 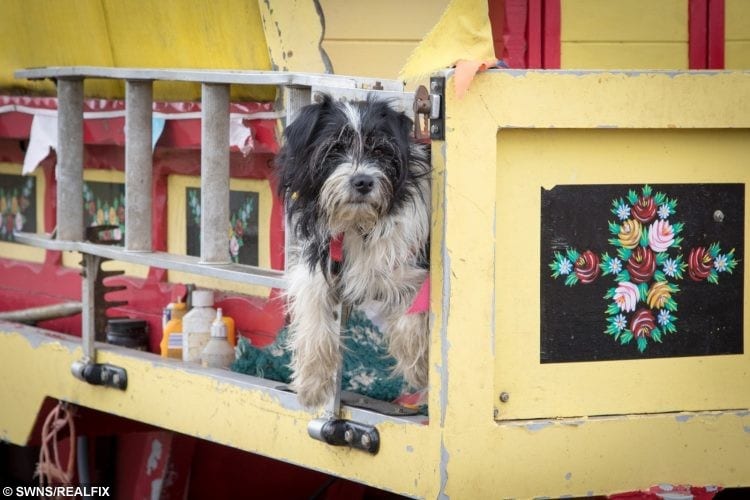 Daisy, who set off on April 22, reached the Kelpies last month is now making her way back south of the border.

She said: “In Scotland, I ate loads of shortbread and got a hamper with all Scottish food and produce which was lovely.

“It has been very challenging at times, but I haven’t run into any trouble at all along the way.

“I have had lots of funny looks and people asking me what I am doing, but I can’t believe how generous people have been.

Daisy, who described herself as “born with a travellers gene” says she picked the Kelpies to pay homage to her much loved horses.

She said: “I loved seeing the Kelpies – it was my first time seeing them and I am so glad I did.”

Imogen Whitby lost her life to a brain tumour — just two years after her twin sister Angel died in the womb.

Her story touched Daisy who says she wants to do her bit to help raise money for brain cancer. 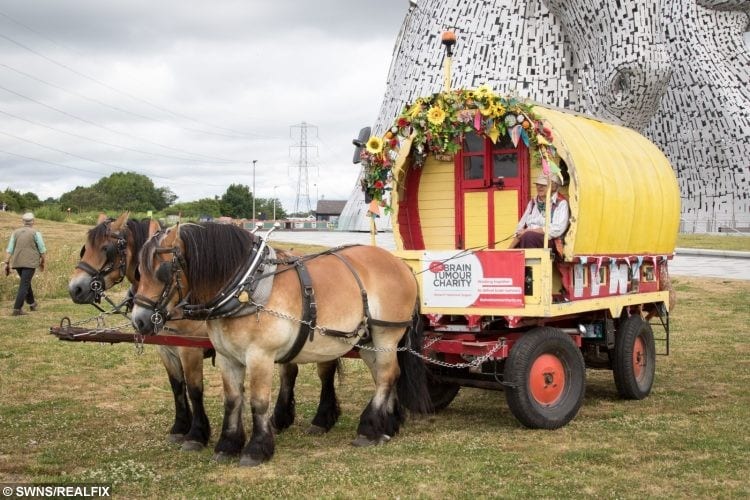 Daisy said: “There is so little known about this disease which leaves families without their loved one so I hope I can do my part to raise some money.

“Plus what’s nicer than being with my horses every day to do it.”

Geraldine Pipping, The Brain Tumour Charity’s Director of Fundraising, said: “Everyone at the charity has been following Daisy’s adventure with huge interest and admiration.

“She’s an absolute star to undertake this epic journey to help raise money for vital research and awareness about brain tumours – the biggest cancer killer of children and under-40s in the UK – after she was touched by Immy Whitby’s story.

“As we receive no government funding and rely 100 per cent on donations, fundraising and gifts in wills, it is thanks to our wonderful supporters like Daisy that we are getting nearer to our goals of doubling survival within 10 years and halving the harm that brain tumours have on quality of life.

“And we wish Daisy all the best with the rest of her journey.”

Readers can donate by going to https://www.justgiving.com/fundraising/sydsplodsgoesnorth

And to find out more visit thebraintumourcharity.org