A freak coincidence saw this mum and daughter lose 17 STONE!

Katie Hunt, with her daughter Amber-Jayne, from Birmingham, who together have lost almost 20 stone. A mum and daughter who together weighed almost 40 stone have stunned their family and shed a whopping 17 stone. See NTI story NTISLIM. Katie Hunt, 50, was so embarrassed after her sister posted pictures of her singing karaoke on Facebook that she lost an incredible 8 stone. And when a colleague described her daughter, Amber, 22, as "that fat blonde one" she was shamed into joining her mum to slim down - after she ballooned to almost 20 stone. The pair, who don't live with each other, took delight in shocking their family when they met up every few months - and even astounded each other.

A super-slimming mother and daughter lost a combined 17 stone in a freak coincidence – when they both started dieting on the SAME DAY.

Katie Hunt, 50, tipped the scales at 18st while daughter Amber, 22, weighed 19st 11lbs after both met up regularly to gorge on chocolates, fish and chips and greasy takeaways.

The mother and daughter piled on the pounds after Katie split from her husband in early 2013 and started eating comfort food.

But in August that year Katie, a legal secretary, saw pictures of herself singing karaoke on Facebook and decided to slim down.

On the same day Amber also decided to take up more regular exercise after she was left mortified when she overheard a colleague describe her as “that fat blonde one”.

Katie joined Slimming World in August 2013 but unknown to her, Amber also started dieting and going to the gym.

Neither told the other they had decided to lose weight but both noticed the other was slimming down each time they met up.

After 12 months they discovered they had both started dieting at the same time and in just two years the pair managed to shed an astonishing 17st.

Her incredible weight loss even spurred her into pursuing her dream of becoming a full-time model.

Amber, from Edgbaston, Birmingham, said: “Although we both lost weight at the same time, it wasn’t deliberate.

“In 2013 I was doing a summer job as a children’s entertainer when I dropped my bag.

“I remember one of the members of staff asking whose bag it was, and another said ‘It’s that fat blonde one’s over there’.”

“I was so shocked and upset. I just thought, this isn’t cool for someone of my age to be called that, so I took matters into my own hands.

“I had no idea mum was also losing weight and it was only after a year that we both told each other what started our change in lifestyle and realised we started dieting on the same day.

“I looked on the internet for advice on what food to eat and started exercising.

“Now I have an omelette for breakfast, white meat and a salad for lunch and then a high It tprotein meal after my evening workout.”

“I do over two hours of cardio a week and at least three weight-training sessions.

“Every time mum and I would meet up we would compliment each other on how much weight we’d lost.

“Our family only meets up every few months, so it was surprise every time how much weight we’d lost.

“She really helped inspire and encourage me to lose my weight, and I think it’s helped her with confidence so much.”

Katie, from Swadlincote, Derbys., piled on the pounds after she went through a messy divorce.

She said: “After I divorced I started comfort eating. Me and Amber would eat takeaways and chocolate. We just piled on the pounds.

“I moved house and I had a housewarming karaoke party.

“My sister Bev took photos, and to my horror she uploaded them to Facebook.

“She’s a personal trainer, and I thought she was doing it to embarrass me, but of course she wasn’t.

“After seeing them up there I knew I had to do something about my weight.”

“I was missing out on promotions at work and I knew it was because I wasn’t happy, after I’d put on so much weight.

“I started walking to work, and without even changing my diet I dropped three stone straight away.

“I found myself thinking up little tricks to help me, like if I was hungry just waiting 20 minutes.

“I always try to leave some food on my plate too, knowing that greed – especially with food – is ugly.

“I had no idea Amber had started slimming at exactly the same time as me.” 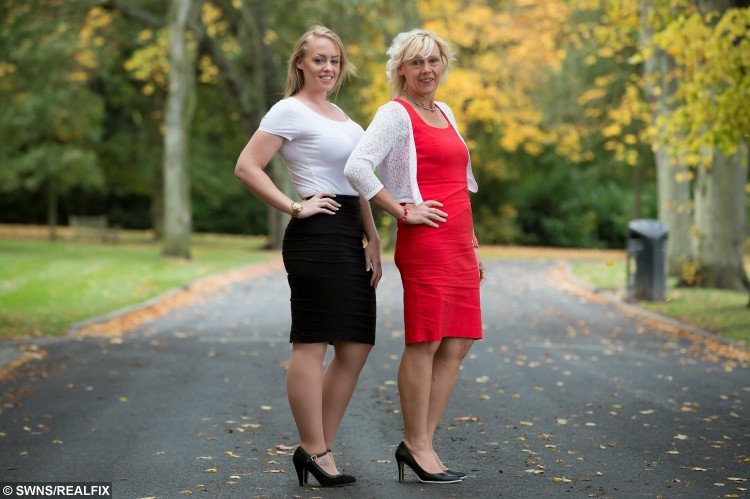 “We both put on weight after the divorce, and obviously realised at the same time we needed to do something about it.

“She’s a lot younger, so it’s easier for her, but she really does look stunning now and it’s amazing now she’s a fitness model.

“We were both real big carb-bandits, and it’s cutting those out that has really helped.”