A miracle tot who spent half of his life in hospital due to major heart defects has defied the odds to reach his first birthday.

Little Braydon Boyland celebrated the momentous milestone with his family on Monday after a gruelling year of surgeries and check-ups.

He was born with three heart defects and doctors had warned there was a one in four chance he wouldn’t survive his first surgery.

The tot, from Port Glasgow, Inverclyde, has already undergone two major operations and spent most of his young life, including his first Christmas, in hospital.

His parents, Paige MacFarlane, 21, and Ross Boyland, 22, said they were left horrified when medics at the specialist foetal medicine unit within the Royal Hospital for Sick Children broke the news at a 20-week scan that their unborn baby had serious health problems.

Paige said: “The rest of the pregnancy was just horrible.

“But we were told what would happen when he was born, and because we found out about his conditions so early we did have time to prepare for it.

“And because he’s our first baby we don’t really know any different so we just get on with it.” 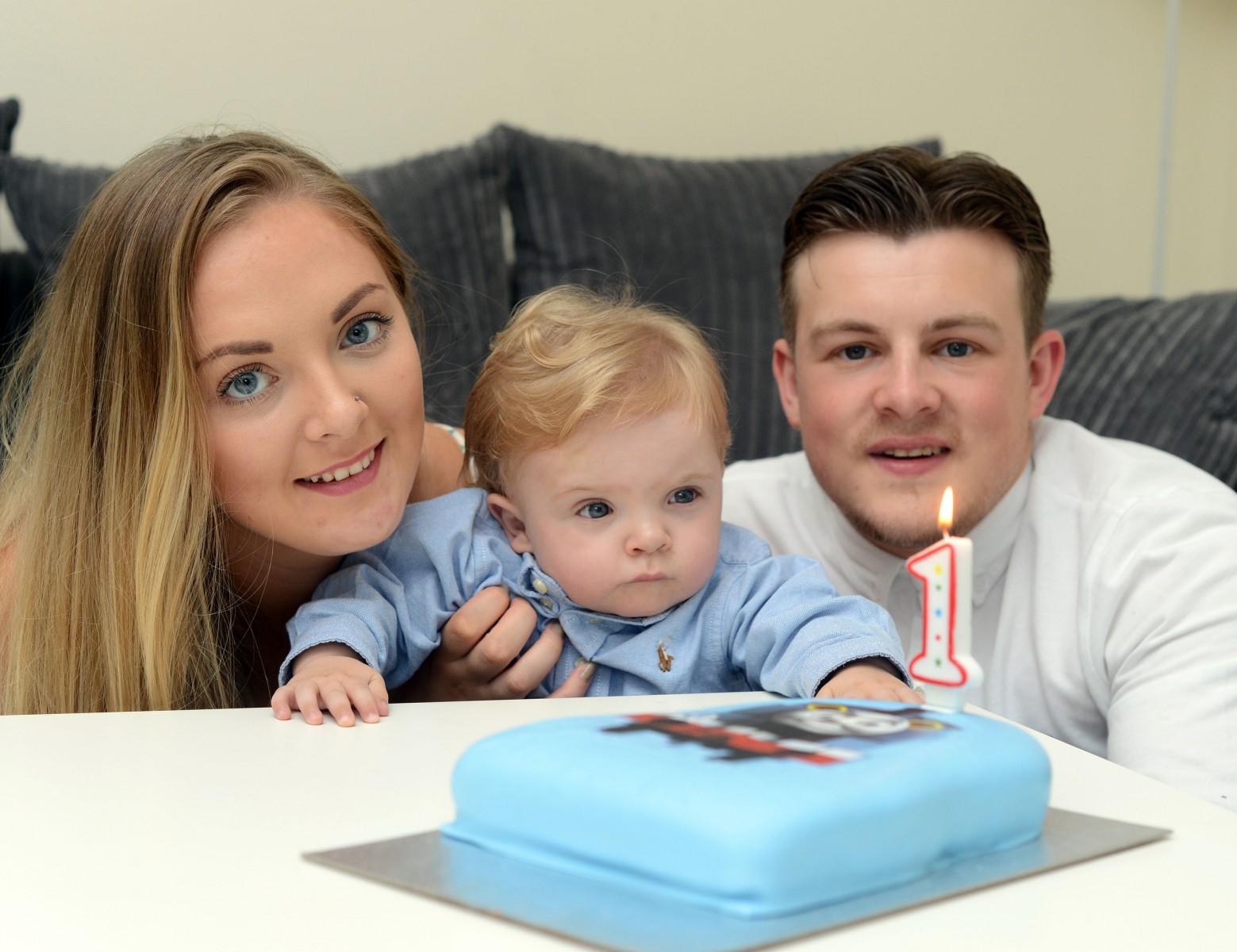 Braydon with his mother, Paige, and his father, Ross.

During pregnancy Paige developed pre-eclampsia, which induced early labour and can be life-threatening.

She was rushed to hospital and baby Braydon was born six weeks early on July 4 2015 weighing a tiny four pounds and facing a fight to survive because of the heart defects.

He was born suffering from pulmonary artesia, and transposition of the great arteries which can lead to breathing difficulties as the de-oxygenated blood cannot get into the lungs.

Doctors told Paige and Ross it was extremely rare for a baby to suffer all three defects – with newborns usually having just one of the conditions.

The condition was considered so grave that medics asked the couple if they wanted a termination.

Paige said: “We knew immediately that wasn’t an option. We couldn’t have lived with ourselves.

“And when you look at him now today I couldn’t imagine life without him.”

In a second operation the six-month-old baby’s body initially rejected a shunt in his heart, so doctors had to open up his chest again and flush it out.

Braydon’s chest was left open for four days to reduce the swelling.

And he still faces another life-saving operation before his fifth birthday and may even need a heart transplant when he’s older.

In September little Braydon was finally allowed home – only to be rushed back to hospital three days later when he began fighting for breath.

Paige, a stay-at-home mum, said: “We were in Tesco and he turned blue and unresponsive.

“He was rushed back to hospital and was put on a ventilator so he could get a CT scan.

“A few weeks later they tried to put a catheter into a blood vessel in his groin up to his heart but the artery had closed over, so that wasn’t possible.

“He had lost the use of his left lung.

“I don’t quite know how we have coped but you just have to get on with it and take every day as it comes.

“I think your instincts just kick in.

“I had never heard of the heart defects before and now I know everything.”

Two days before his first Christmas, Braydon underwent a second operation to install a left-sided shunt.

Paige said: “The second surgery was harder as Braydon was a bit more aware. Ross took him in to get the anaesthetic to put him sleep – I couldn’t do it.

“It was amazing to get him home but also terrifying in case anything else happened.

“He’s been in hospital most of his life so far.”

Looking to the future the dedicated couple have been told by doctors that Braydon will never be as fit and healthy as other children but they are determined to give him the best quality of life.

And sitting up, playing with his birthday balloons, the tot looks like any normal baby celebrating his first birthday.

Paige said: “He’s very interactive – he’s sitting up on his own and wanting to walk.

“For everything he’s been through, he’s just a happy baby, precious and beautiful.

“And he doesn’t have a feeding tube anymore, so he looks like a normal happy wee boy.

“If you could take it all for him, you would. He’s been through more than anyone I know, but he’s always smiling. He’s our wee soldier.”