A woman who suffered crippling foot pain for 15 years has been cured – after a beautician yanked her TOE during a pedicure.

Debbie Thompson, 54, suffered a dropped metatarsal in 2001 which left her with a 1cm lump of BONE protruding from the ball of her left foot.

The 20-stone mum-of-three was left unable to walk properly – and was forced to wear thick-soled shoes or flip flops every hour of the day to cushion the joint.

She underwent FOUR operations but they failed to help and she gave up hope as podiatrists and surgeons were left stumped.

But when she hobbled into a nail salon last month for a pedicure her life was miraculously turned around – when a nail technician simply popped her toe into place.

Pedicurist Holly Pope, who has been working in the industry for less than a year, cured her pain by jerking her fourth toe into place.

Debbie, a volunteer hospital chaplain, said: “The lady was giving me this wonderful pedicure.

“She pulled my toe and there was this loud click, and it just popped into place.

“I thought I was going to pass out with the pain, it was so intense. I managed to stagger to the car and get into bed.

“It wasn’t until a bit later when I stood up again that I noticed my foot felt different.

“I ran my finger along the bottom of my sole and the bone had gone. I couldn’t believe it.”

Debbie, a grandmother from Bath, Somerset, developed her foot problem on a family holiday to New York in 2001.

She is a former ballet dancer and had never experienced foot problems before but said: “We had gone to bed after a long day of walking around.”

“I was completely asleep when I suddenly woke up with this absolutely agonising pain in my left foot.”

“I tried to stand up and, as I did, I literally screamed the place down. My foot was round – almost a Swiss roll shape.

“It was not a pretty sight. My bones were sticking out in all weird places.

“I went to see a podiatrist the next morning and he told me the only way to get my foot back together was surgery.”

Debbie was diagnosed with a dropped metatarsal and her instep had become so tight all the bones had shifted.

She returned home – and ended up waiting 22 months before she had her first operation on the NHS. 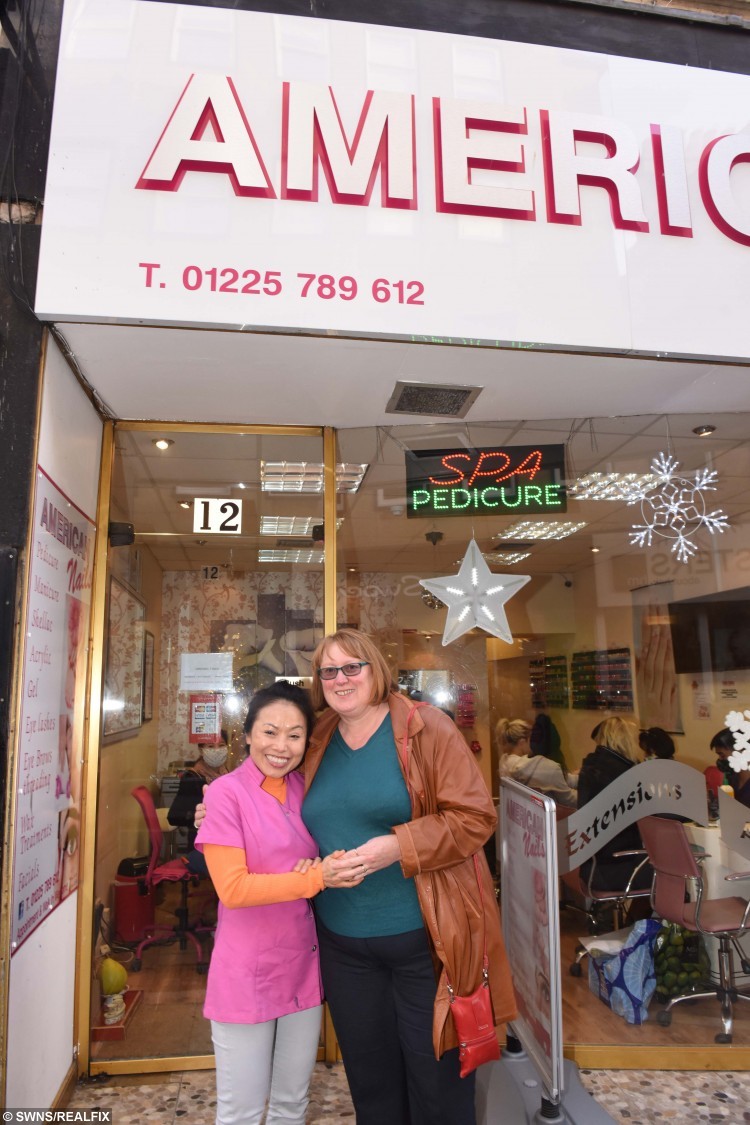 She said: “In that time I managed to crush nerves by walking on the side of my foot.

“It was like standing on a hard stone the size of a pea all the time.

“My toes didn’t touch the floor as I had this big bone sticking out. And I’m size 20, so all of my weight was balancing on this one point.

“I had to wear flip flops or other thick-soled shoes constantly to cushion it – I couldn’t even step out of bed without them on.

“I had to get rid of all my beautiful shoes. It just ruined my life. It was painful all the time.”

After operations failed to help, Debbie went to see numerous surgeons and begged them to do something about the unbearable pain.

But they said there was nothing they could do – and it wasn’t until she went to American Nails in Bath to get a pedicure that everything changed.

Her foot remains tender after the miraculous pedicure last month, but Debbie said her life has been “completely transformed”. 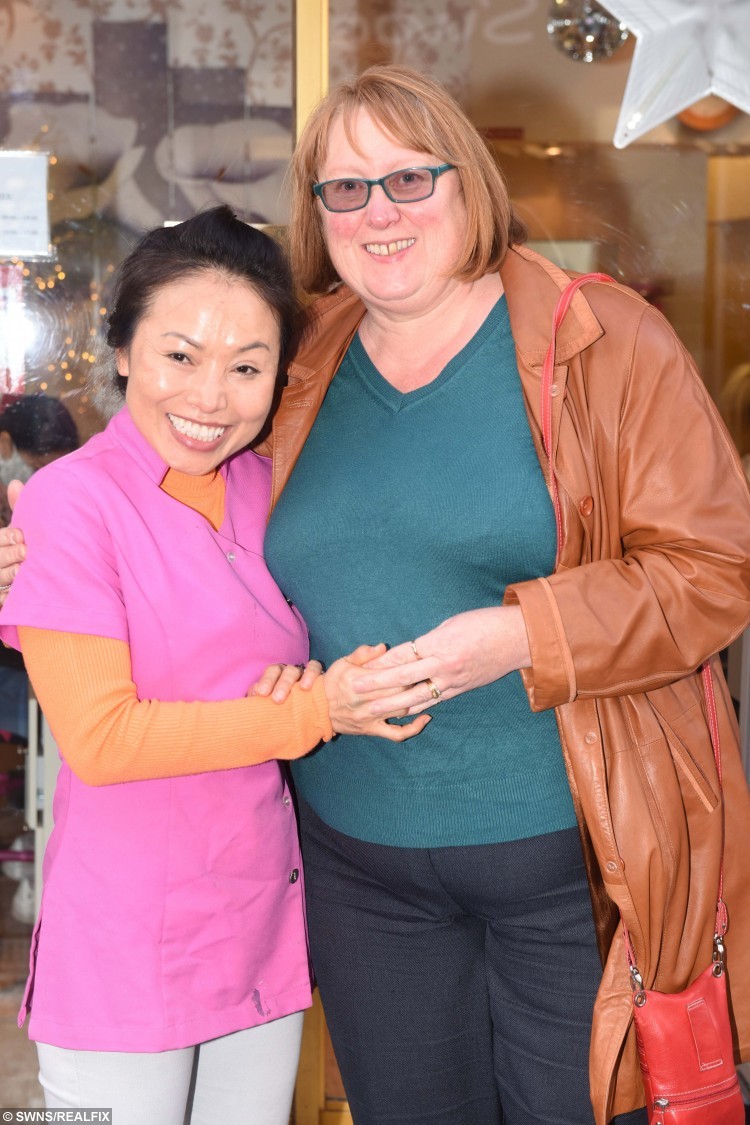 She said: “I just can’t ever thank Holly enough. She has changed my life so dramatically.

“To be able to stand up with no shoes on and not be in pain is miraculous.

“The pain was so bad that it was getting to the point where I just wanted to have my foot chopped off.

“I can stand up and I can even go up on my tip toes. I can actually walk up and down a hill now, and take my dog for walks.

“Throughout my forties, when I was supposed to feel quite elegant, I was been forced to wear ugly, thick-soled shoes.

“Now, I might be able to wear heels next year, when my two daughters get married. I’m just so excited.

“I can play with my grandchildren now, and I can’t wait to run across the beach when I go on holiday next year.”

She went back to salon to thank Holly and said they both “burst into tears”.

“I just held her toe and held the bottom of her foot in my other hand.

“I could feel the bone was not correct, and I usually just massage it as I feel.

“But something happened. I was playing with the joint and it made a loud click. I could see it hurt, so I stopped.

“When Debbie came back into the salon a few days later, I was really worried because she was in tears.

“But she told me I’ve changed her life. It was a miracle. I’m so happy to have made a difference.” 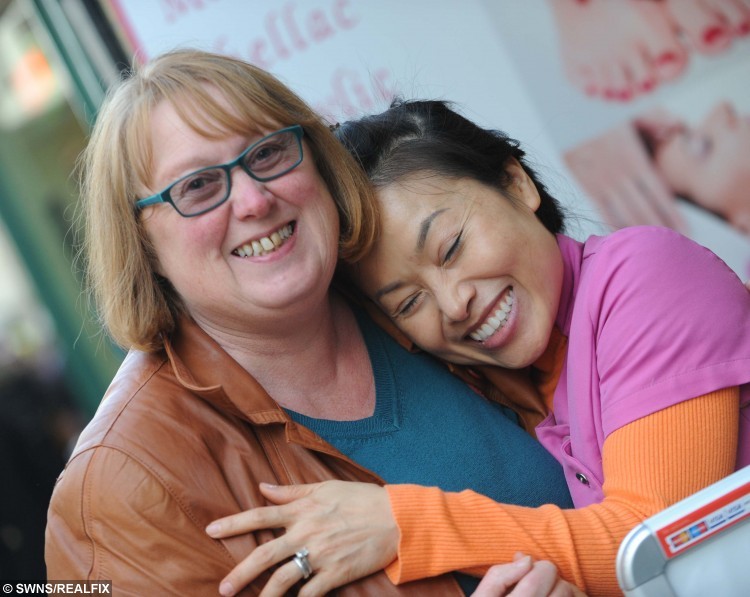 Pampered pooch takes pride of place at owner’s wedding as their flower girl!

Pampered pooch takes pride of place at owner's wedding as their flower girl!