Are your shoes killing you? A third of women are left unable to walk – because of ill-fitting shoes

by RealFix
in Bizarre, Health
0
80
SHARES
82
VIEWS
Share on FacebookShare on TwitterWhatsapp

Nearly half of all British women are unable to walk the day after an evening out – because of their ill-fitting shoes.

It seems women can have a reckless attitude towards footwear and frequently wear heels which are too painful to walk in.

Long Tall Sally’s “If the Shoe Fits” survey found a third of women have hit the town in shoes they know will leave them unable to walk for up to TWO DAYS after.

Which means up to 8 MILLION women could be hobbling around today after stepping out in uncomfortable footwear on Saturday night.

The average woman owns at least three pairs of shoes which are painful to wear because they’re the wrong size, are too high or encourage a turned ankle.

Stilettos are considered the worst kind of shoe to wear for comfort, followed by strappy heels or peep toes.

Three quarters of women confess to owning at least one pair of shoes which are “absolute agony” to wear while a third of women admit to having “sit down shoes” which can only be worn to seated events. 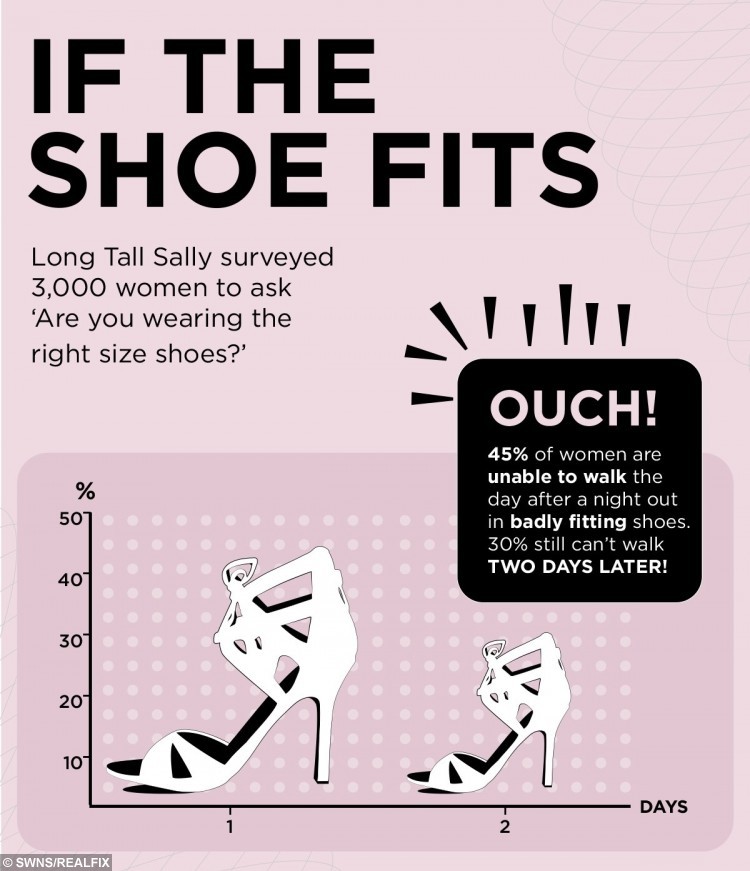 Lindsey Clark, Head of Garment and Shoe Tech for fashion and footwear retailer Long Tall Sally, which commissioned the poll of 1,000 women, said: “Our research suggests 32 per cent of women are wearing the wrong size shoes. Even the most beautiful shoes will look unattractive if they’re two sizes too small.

“Stats show that 62 per cent of women haven’t had their feet measured in more than five years, and 45 per cent in more than 10 years.

“We urge our customers to head in store and have their feet measured to check they’re wearing the right size shoes.

“Lots of lifestyle factors can change the shape of a woman’s foot, from pregnancy to ageing to weight loss.” 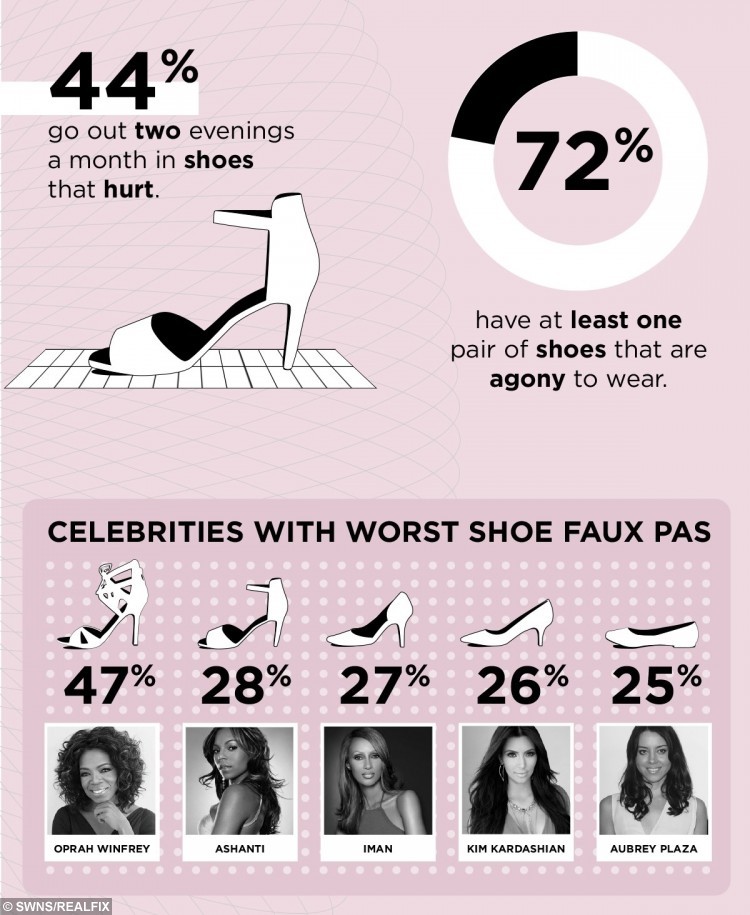 More than half of women say having footwear which “looks good” is most important to them when buying shoes. And most will go on to wear uncomfortable shoes if they match a certain outfit.

But not all women can endure the pain of an ill-fitting pair of shoes for long – with the average person lasting just two hours on a night out before having to take action.

In this scenario, more than half would opt for dancing or walking in bare feet, while a further third would carry a spare pair of comfortable shoes in their handbag.

Fourteen per cent of women have simply thrown in the towel, cutting a night short because they couldn’t stand the pain any longer.

Diana Bonham, Head of Buying for Long Tall Sally, states, “If your feet are miserable, you will be too.

“Women are often choosing shoes because they look great with an outfit, but if they are too high or too tight women are spending whole evenings in pain.

“By having their feet measured, buying shoes which are both fashionable AND comfortable, these women can then step out in shoes which they can actually walk in, and look great as a consequence.

“At Long Tall Sally we’re filling a gap in the market by offering on-trend, well fitting footwear in sizes 7-13.”

When it comes to celebrities who are guilty of making faux pas with their footwear, Brits voted Oprah Winfrey as the woman most likely to make a mess of her choice of shoes.

Kim Kardashian also has a bad reputation for selecting shoes which clearly don’t fit, as do Ashanti, Aubrey Plaza and Iman.

Would YOU like to live in this £30m home, once owned by the Queen’s Grandparents?

A pensioner who took an hour to climb the stairs told to pay £2,000 for a stairlift

A pensioner who took an hour to climb the stairs told to pay £2,000 for a stairlift