HomeBizarreHealthAgoraphobic finally leaves home after a decade then plunges down manhole 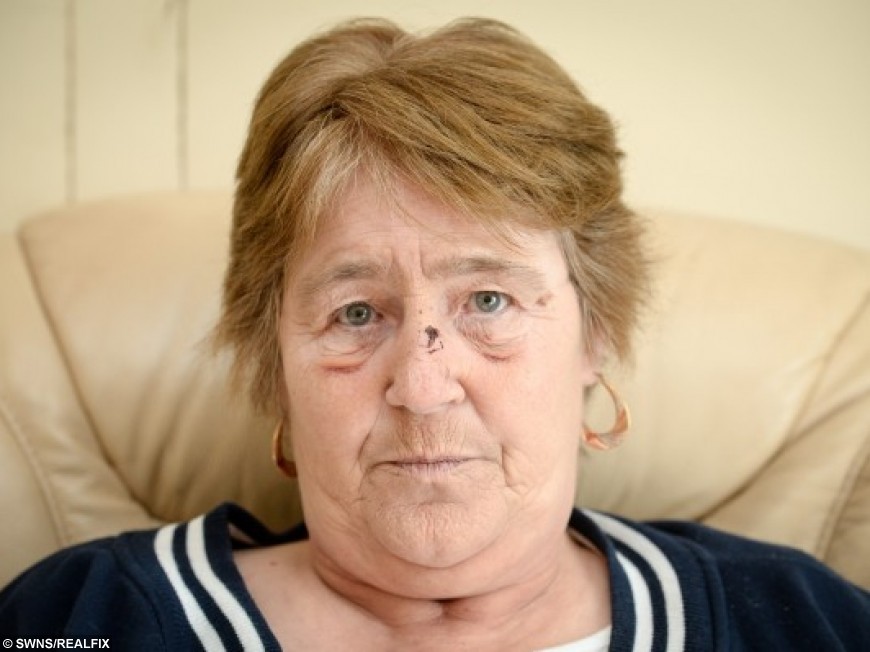 An agoraphobic called Janet FAAL went out of the house for the third time in TEN years – and falls down an open MANHOLE. 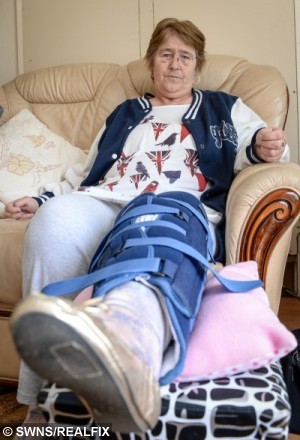 Janet is recovering from her ordeal at home

Grandmother Janet, 57, had only just started leaving her home after more than a decade of suffering crippling fears of the outside.

Janet – whose surname is pronounced ‘fall’ – went out with a friend last week as part of her rehabilitation.

But she moved a wooden pallet to help her pal reverse and stepped into the open manhole – and did the splits as one leg plunged down into the shaft.

She banged her face on the pallet and broke her nose and suffered a suspected fractured leg.

The grandmother-of-four reckons she has been set back ‘years’ in her battle with debilitating agoraphobia.

Janet, of Crawley, West Sussex, now reckons she may never leave the safety of her home again.

She said: “I was with a friend – it’s hard for me to go anywhere, but I was getting better. Now I’m not so sure.

“I was helping her reverse out of a car park, and there was this wooden pallet in the way.

“I moved the pallet and took a step over – never in my life did I think there was a hole underneath, I thought it had just fallen over.

“The next thing I remember is the pain. It was awful.”

As she fell she banged her face on the pallet, breaking her nose, suffered a suspected fractured on her leg – and was left in agony and fearful of ever going outside again.

The incident happened in the forecourt of Complete Tyres Services, in Crawley.

She spent nearly an hour in pain waiting for an ambulance while a paramedic, who arrived in a car, tended to her.

Janet said: “I had moved the pallet out of the way with my foot and I was going to turn around to my friend say ‘is that far enough?’

“The next thing I knew, I fell and smashed my face on the pallet, and I was in the hole with blood all over me and I couldn’t move.”

Concerned son Andy MacDonald, 39, a painter and decorator, said: “I’m absolutely livid.
Whoever owns that manhole should get it fixed and get it fixed right now.

“It’s ruined my mother’s recovery. I can’t believe it. Whoever owns that manhole has something serious to answer for.

“I’m self-employed, and I have to take time off work to care for my disabled mum, who has been knocked for six by negligence.

“If she was smaller she would have gone all of the way down – a slender woman or child could have been very seriously hurt.”

An employee at Complete Tyre Services claimed the holes have been reported “loads of times” to the owner of the site.

Andy said: “Me and my mum and sisters would like to thank the garage workers.

“They were with her the entire time and helped her ever so much.” 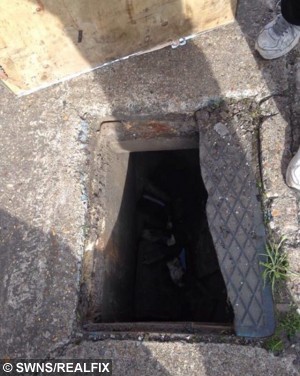 Janet did the splits as she fell down the open manhole

The site is leased from the owner of JP Supplies, which sells safety clothing to the construction industry, next door to Complete Tyre Services.

A spokesman for South East Coast Ambulance Service confirmed its attendance and explained why it took so long for an ambulance to arrive.

He said: “When the call came in, with the information provided by the caller, it was classified as a ‘class C’ call.

“We always do our best to back up the first paramedic as soon as we can but life-threatening calls have to take priority.”

Neither the tyre shop or their landlord JP Supplies are accepting responsibility for fixing the broken manhole.

A worker at the garage said: “We have been trying to get the manholes in the forecourt fixed for years, but that’s happened is they were covered with pallets.”

The building owner, who also runs nearby business JP Services, said: “They are the tenants, so it’s down to them to fix the manhole cover.

“I’m the landlord, but they have not spoken to me about it.”

« Previous post Childhood sweethearts reunited after 50 years apart travel halfway round the world for the ultimate romantic gesture
Next article » This was no bog standard delivery! The mum who found her baby down the toilet