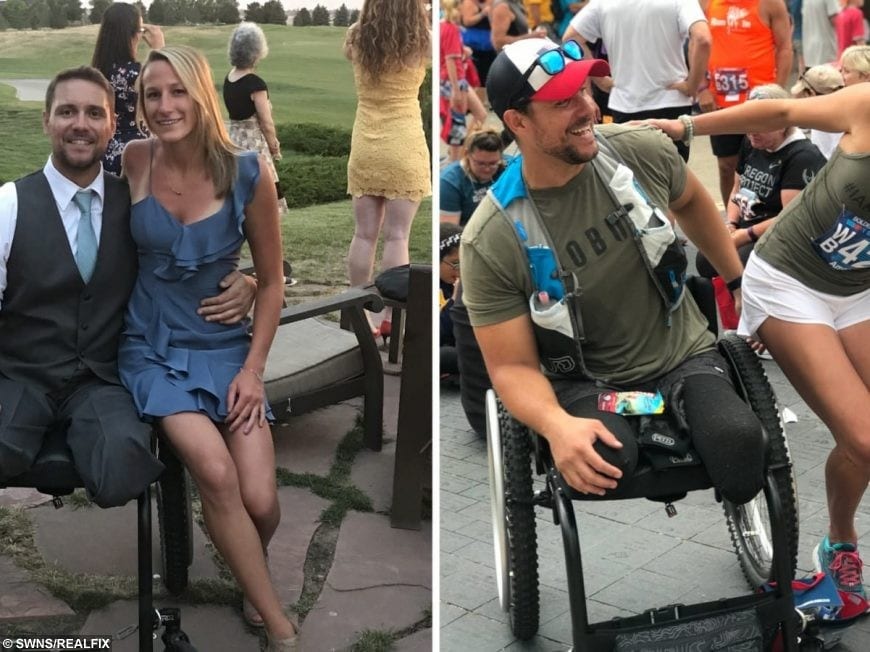 A fitness fanatic who nearly died in a horror car crash has found love with the woman he was meant to go on a date with – on the day he lost his limbs.

Craig Towler, 32, of Boulder, Colorado, was grabbing a cooler out of his trunk on the Fourth of July in 2016.

A car veered into a parked car, trapping him between the two vehicles and crushing both of his legs irreparably.

In the hospital, while doctors discussed his double amputations, Craig asked a friend to let his new love interest Amanda, 30, know that he wouldn’t be able to make the date they had planned for that evening.

The pair had only been seeing each other for three weeks, but Amanda rushed to Craig’s bedside and, three-and-a-half-years later they are still together.

He said: ”I looked down and I saw both my legs were disconnected,” he said. ”They were pretty much broken off with just skin holding the ligaments together.”

Craig, an events coordinator, added: “I honestly didn’t know what to expect but she was there immediately, no questions asked and I knew she would be the one for me.”

In the following months he endured nine surgeries and intensive physical therapy.

“Amanda was with me more days than not,” he said.

Eight months after his release from the hospital the couple moved in together.

Craig said: “Amanda was a big part of everything. We are extremely happy.”

As devastating as Craig’s incident was, he believes it brought him closer to Amanda.

He said: “It 100 percent helped to have a partner there in such a hard time…with so many emotions going on.

“It shows a lot about that person, to be so comforting for someone who is in that much distress.

“In that short period of time I quickly learned how selfless and kind she is, especially considering the shape I was in.”

Remembering the day of the accident is still traumatic for Craig.

He said: ”I was bleeding out so badly from the impact of the car bumper The impact was extremely concentrated on my legs.

“They were crushed and they were hanging there, but not fully gone.

“I didn’t realize at the time what had happened, but I knew something had happened that was major.

“Some people came by and helped lay me flat on the ground.”

Shockingly, Craig was still conscious and was able to speak.

“I instructed them how to tie tourniquets around my legs with belts or whatever they had to stop the bleeding,” he said.

Craig’s injuries were so severe that he had to be airlifted in a helicopter to the trauma center at Denver Health Medical Center.

“I was conscious the entire time and I remember everything until being sedated for the surgeries,” he said.

“I still have those memories and sometimes things trigger them.

Doctors told Craig that if they did not amputate his legs from the knee down, he would bleed to death.

“It was either life or limb,” Craig said.

“I was bleeding out so badly that I could have died.

“I remember telling the doctor: ‘You know what, just do what you have to do.’”

But Craig was determined that he would not let the tragic accident dominate his life.

“When I was in ICU I made a very conscious decision,” he said.

“I was talking to my mom and I said I need to accept what had happened and that it was real.

“Only once I had that acceptance could I move forward.

“Though my path was a different one and a lot more challenging, I was still alive, and I decided to live.”

In September 2016, just a little over a month after being released from the hospital, he went back to work.

Before he lost his legs, Craig was a sports enthusiast and regularly took part in 10k runs.

He and Amanda first met at their local gym, where she worked as a fitness trainer.

“It took a while for me to get the guts to talk to her. I actually would schedule my workouts around the time when she was working,” he admitted.

“I would say ‘hi’ and ‘bye’ and finally I walked up to her. It was a slow process for me.

“I’m really happy that I finally did it.”

Before his horrific injuries Craig aimed to participate in BOLDERBoulder, a popular race that takes place every Memorial Day in Colorado.

Just ten months after his amputation, he completed the race in his wheelchair.

He has now participated in the race three times. He also kayaks, skis, hand-cycles and rope climbs, as well as working-out regularly in the gym.

He said: ”What has happened is now part of me, but I don’t lose sight of what I was before and I’ve found a happy balance.”

Craig has since founded Amputee Concierge, a program offering people who have lost limbs advice, support and information on life as amputees. More information can be found at www.amputeeconcierge.org.

As for his relationship with Amanda, Craig said: “I definitely see a future. As with everything else, we take things day by day.”