A four-month-old baby boy is having to wear a specially made helmet for 23-hours-a-day to straighten his skull – after being diagnosed with “flat head syndrome”.

Little Donevan Needham was born with plagiocephaly and Torticollis, which is usually caused by babies lying on their backs when they sleep.

But the tot is believed to have developed the condition because he was in the birth canal for too long when his mum went into labour.

It means Donevan’s head is “twisted”, and without treatment, his jaw would become misaligned and he would remain deaf in both ears.

His parents, Natalie and David, have now had to raise £2,000 in eight weeks to pay for the special helmet which he will wear almost constantly to gradually mould his skull.

The plastic headwear with polyester inside is not available on the NHS as they say there is not enough evidence to show it works better than alternative free techniques.

Nine days ago Donevan was fitted with the helmet at Technology in Motion – an orthotic clinic in Derby.

The family have raised £1,765 towards the treatment with the help of charity Tree of Hope, which pays the up-front cost for private medical care for children with rare conditions not funded by the NHS.

Experts have told mum that Donevan has an 80 per cent chance of improving the shape of his head, and his chance of recovering his hearing is thought to be 50/50.

The helmet allows the soft bones of the skull to grow into the areas of the helmet that it should occupy, making it a more rounded shape.

Although his condition can be helped by physiotherapy, Donevan can’t move his head to the left and can only really use his right arm.

Mum-of-four Natalie, 30, from Hucknall, Leics., said: “Donevan was hospitalised with Bronchitis and while we were at the hospital I said ‘there is something wrong with his head’.

“Then he was referred to a physiotherapist who said he’d seen conditions like this in children before.

“I knew kids could wear helmets to help their head shape and (the doctors) said we could get a helmet but it is not funded on the NHS.

“I kept saying ‘there’s something wrong with his head’ because every time we tried to turn it he screamed.

“If you sit him on your lap and hold his head straight, his face would be more towards the left hand side.

“The doctors described it as his head is twisted.

“He goes every three weeks to the physiotherapist and we have to do some of our own physiotherapy twice a day.

He has to go every two weeks to have the helmet adjusted by specialists.

“He is only allowed to take it off for an hour a day.

“They first told me he developed the condition because he was in the birth canal for too long, but we are unsure how it came about.

“If we didn’t do something and if it didn’t change, his jaw would be misaligned and he has been left deaf in one ear and half deaf in the other.

“He was fitted with the helmet nine days ago at a private clinic called Technology in Motion which is based in Leeds but they have clinics all over the country and we went to the one in Derby.

“I think it’s important that people know there is another option, and that they can get the care.

“It’s easy to just trust everything a doctor says, and if we hadn’t looked into it and found the private clinic in Derby, Technology in Motion, he wouldn’t be getting that care.

“A helmet is much cheaper and less invasive for the child than the NHS paying for surgery when they’re older.

“Our main aim is just to raise awareness, a lot of new mums are going to listen to doctors who say ‘it’s okay, it will be okay in the long run’, but people need to know that there is help out there.” 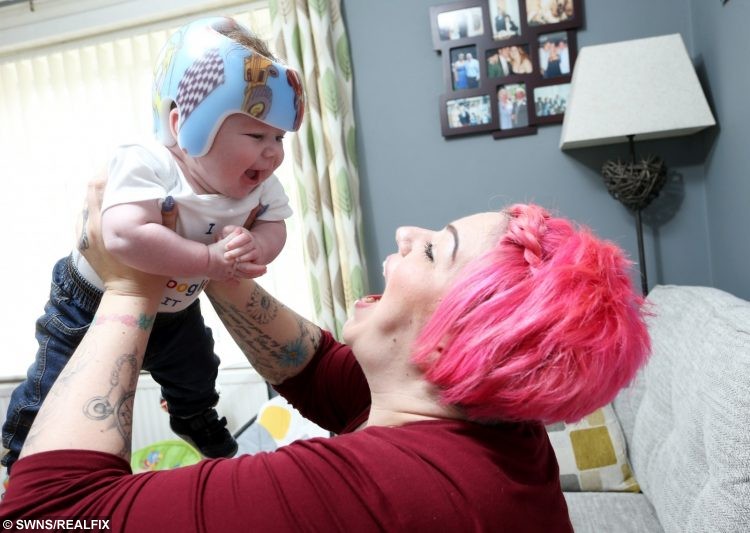 Guidance on the NHS website says action such as changing the position of toys and mobiles in a baby’s cot to encourage them to turn their head on to the non-flattened side, and alternating the side you hold your baby when feeding and carrying, can help.

In an attempt to raise the rest of the money, the family will hold a coffee and cake morning and have asked people to donate on their Just Giving page – https://www.justgiving.com/fundraising/donevan-needham