A baby girl born with her vocal cords fused together says ‘dada’ for the first time in this precious clip.

Mike and Becca Caputo, both 35, shared footage of daughter Maddie Caputo, one, after she underwent eight hours of surgery to give her a voice.

The tot was born with a narrow airway not much bigger than a straw and a glottic web, meaning her vocal cords were 75 per cent fused together.

The fused cords meant it would take Maddie all her energy to muster up a squeak and when she laughed or cried all that came out was a raspy, breathy whisper.

And her tiny airway meant when she suffered near-fatal septic shock from an infection in April, medics had to use a mini breathing tube meant for preemies to save her.

After three weeks fighting for her life in intensive care, Maddie battled back to full health and eventually underwent laryngotracheal reconstruction surgery (LTR) in August.

Specialists cut open her airway and sewed in cartilage from between her ribs to make it larger before cutting her vocal cords, giving her the ability to make louder noises.

Sixteen days after the op Maddie said her first word – ‘dada’ – and now the brave youngster is constantly chattering to her parents and brother Andrew, three.

Mom Becca, a nurse from Aurora, Illinois, said: “You can tell Maddie’s voice is different, but she definitely has a voice now.

“Before the surgery she was using also all her energy to try and make sounds and babble words.

“When people heard her cry they would say, ‘Oh my gosh, does she have croup?’ because it sounded like a raspy whisper. It was quiet and weak.

“Now her cry is louder and she has started forming words. She says momma, dada and bye bye.

“It was incredible to hear her. It is a miracle for us.”

Dad Mike, who works in product management at a software company, added: “Maddie is just amazing. She is so resilient.

“At one point things were looking really bleak, but she fought on. It is like she has some kind of superpower.

“The doctors said she will probably always have a little hoarseness to her voice but otherwise she will be able to talk and that is all we care about.”

Maddie was born healthy in October 2016 but in the weeks following the birth, Becca and Mike noticed she had a quiet, hoarse cry.

Doctors put a camera down her nose to look into her throat and discovered that her vocal cords were fused and that the area between them was abnormally narrow.

Medics tried to cut the cords when she was four months old but could not operate because her vocal cord gland was too thick – so would close back up again.

They planned a more complex surgery for a few months down the line, when Maddie would be older and stronger.

But in April she fell ill with an unrelated urine infection and was rushed to hospital where medics battled to save her life after she went into septic shock.

The team had to call in specialist anaesthetists to fit her with a tiny breathing tube which is typically used for premature babies because her airway was so small.

Becca said: “They saved her life that day. It was very scary.”

Mike added: “Somehow she didn’t have any brain or organ damage long term. She didn’t miss a beat.”

Maddie spent three weeks in the ICU before returning home and eventually had the LTR surgery at Lurie Children’s Hospital of Chicago in August.

After three weeks of recovery she was back to her normal self – plus a brand new voice.

“Maddie is now racing around the house, getting into trouble, pointing and yelling at things and talking all the time,” Becca said.

“You would look at her and never know anything of what she went through.” 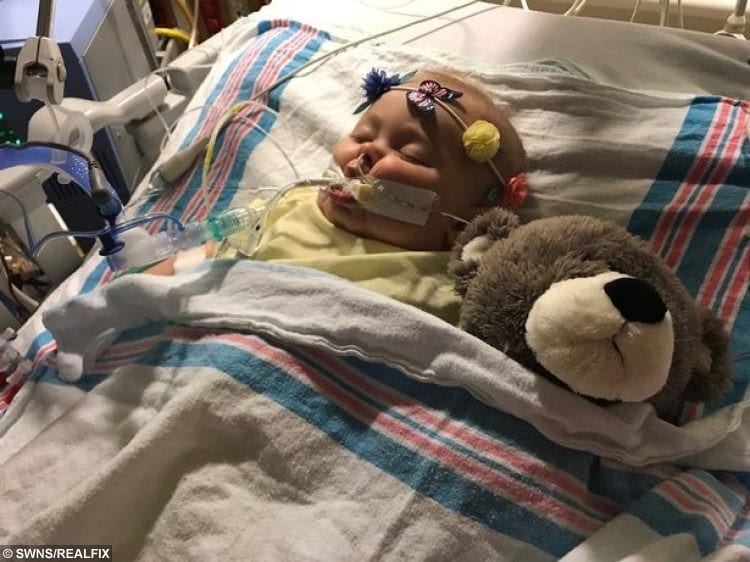 Mike added: “I get choked up when I think about what the doctors did for Maddie. They saved her.”

He said: “Without repair, her voice would have continued to be high-pitched, strained, and weak.

“Although it will likely never be completely “normal” in tone due to the web and its repair, she should have an adequate voice as she grows.

“We continue to monitor airway reconstruction patients for years to ensure the grafted cartilage is continuing to grow with the child, so the ultimate outcome cannot be determined yet.

“As of now, however, Maddie is on track to do very well.”

Disabled Five-Year-Old Boy Forced To Sleep In A CUPBOARD