A devastated family have been left homeless after a tumble-dryer blaze caused £25,000 worth of damage to their house.

Caitriona Casey, 30, her partner and their two children lost most of all their belongings when the Beko 6kg dryer burst into flames last week.

Miss Casey, of St Neots, Cambs, managed to grab her daughter Carragh, 4, and son Macdara, 16 months, and get out of the house before anyone was hurt.

But the downstairs of their home was completely destroyed along with family possessions, including all the children’s toys. 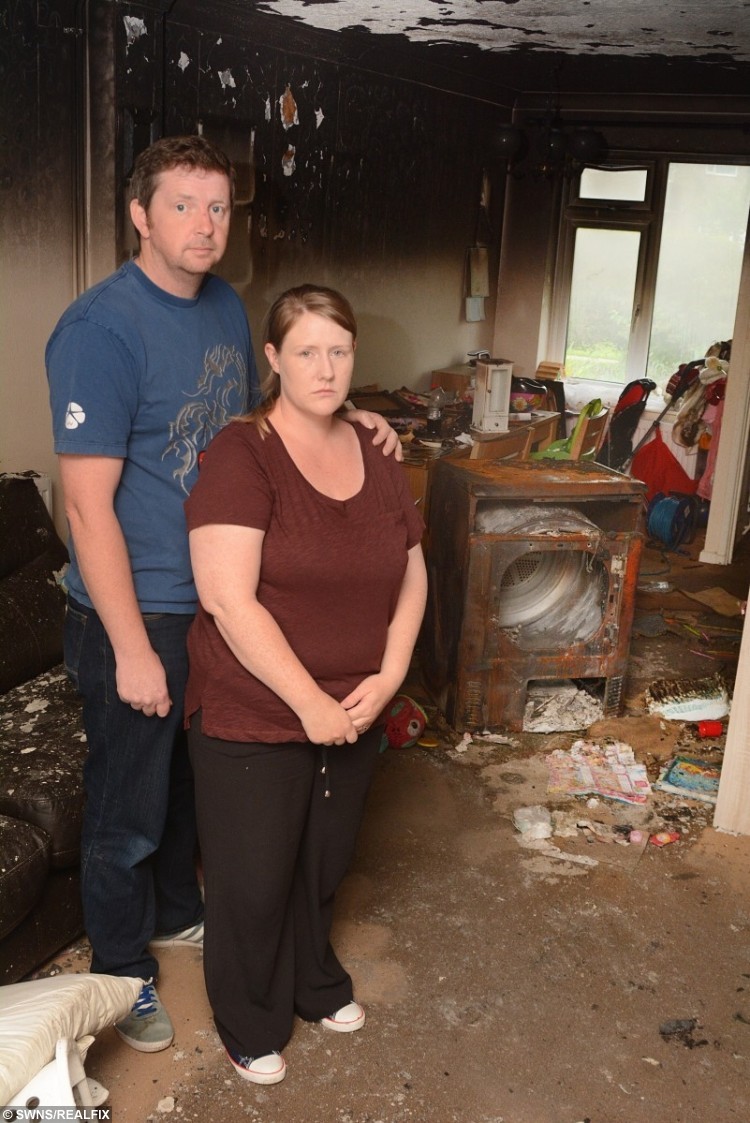 Describing the ordeal the full-time mum said: “It is just heartbreaking for us.

“Stuff can be replaced but it is the memories that are the worst things.

“Everything is gone from inside the house. It is just about starting from scratch now.

“It happened all so quickly and it’s destroyed our kitchen, sofas and all the kids’ toys.

“My daughter’s got a Disney Dumbo toy that she has slept with since she was a baby.

“The night after the fire she cried herself to sleep because he has gone. It is so unfair but how do you explain that to a four-year-old.

“How is she supposed to understand her favourite teddy has gone?” 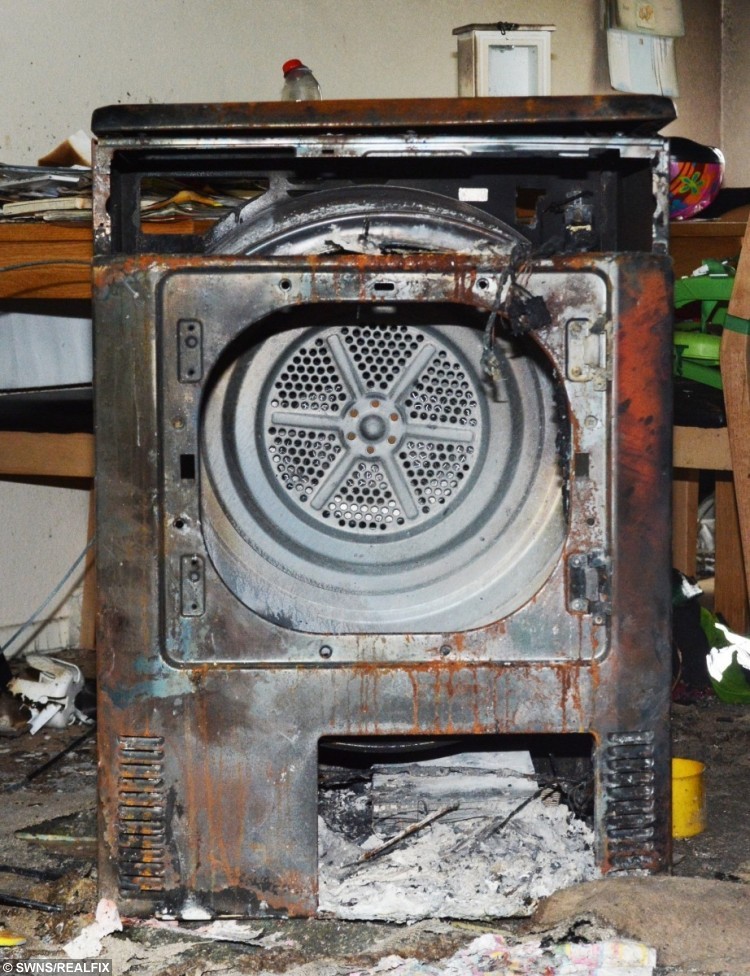 After seeing flames inside tumble-dryer she initially tried to put it out with a wet tea towel.

But she quickly realised that wasn’t possible so she grabbed her kids and rushed outside where she called the fire brigade.

She said: “I heard a loud bang and that is when I took everything out of the tumbler and turned it off.

“I smelt something funny so I opened the condenser at the bottom of the appliance, that’s when I saw the fire inside.

“I didn’t panic straight away. I got a wet tea towel thinking I could put it out but I quickly realised there was no way I could get my hand inside the hole.

“My kids were in the sitting room so I grabbed them and ran outside.

“I called the fire service but it felt like I was waiting about half an hour for them to come.

“I was so scared when I started to see the smoke coming from the house and then the window in the kitchen blew out.

“I just think that if I had stayed there another minute things could have been much worse.” 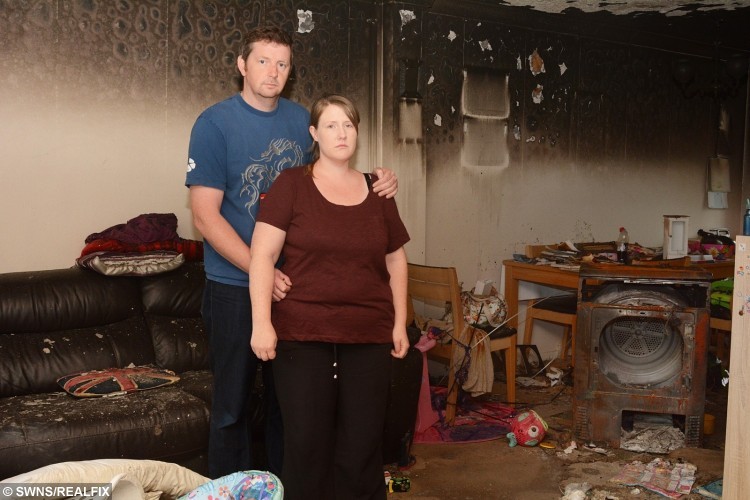 Unfortunately the blaze had caught hold of most of the downstairs of the house and caused extensive smoke damage to the upstairs.

Miss Casey’s partner Darren Healy, 41, was in London at the time attending a course for his job as a HGV driver and rushed back to find a scene of devastation.

The family have since been moved into a single room in a nearby hotel while they claim on their insurance.

Miss Casey believes that the machine’s manufacturer is partly to blame for the fire. 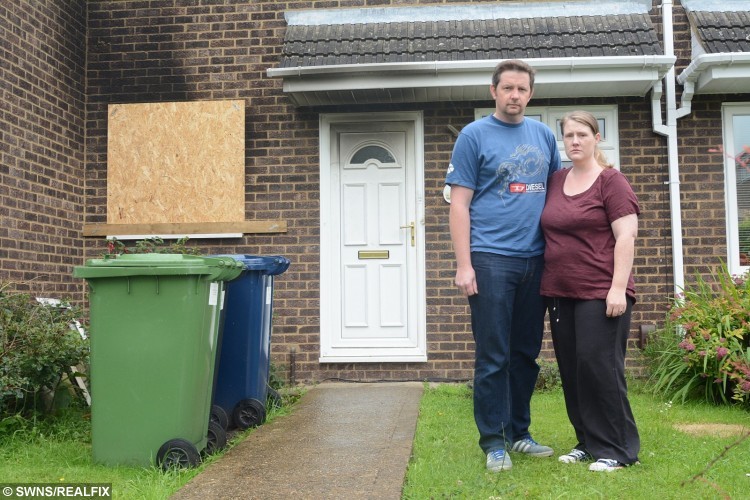 She said: “First of all they need to think how they make these things. It is not just me who has been affected.

“How can there be that many incidents if they are making them properly?

“The fire was in the bottom of the machine and it wasn’t my fault.

“I’ve been so careful in the past and would never leave the tumbler on at night.

“I took care of my appliances. I am not the type of person to neglect them.

“I used to clean the filter after every use and the condenser more than every month.”

They have lived in the house for the past 18 months and have been overwhelmed by the support of friends and neighbours.

Miss Casey said: “One of our neighbours has been washing our clothes for us to try and get the smoke smell out of them.

“Another one has been cooking us dinner which we are so grateful for.”

A Beko spokesperson said: “We take any reported issue with our products incredibly seriously and treat them with the upmost priority.

“We have no record of being contacted by Miss Casey or the Cambridgeshire Fire Service regarding this incident so we are unable to comment any further on this matter.

“We will of course investigate this issue as a matter of urgency if a Beko product is involved.”

HIS MASTER’S VOICE – A student is framing barks, meows, and even neighs for loving pet owners