Alison Hayden, 10, who had her leg amputated after a rare bone cancer was discovered, pictured at her home in Blackpool, Lancashire, on 18 October 2015. See Ross Parry Copy RPYCANCER: A girl who has only ever walked on her TIPTOES has had her leg amputated after being diagnosed with a rare bone cancer. Alison Hayden, ten, looked "like a ballerina" and was unable to put her feet flat on the floor until she was fitted with leg splints. But after doctors noticed a lump growing on her leg, X-rays revealed she had a cancerous tumour - leading to her having her leg chopped off below the knee. Mum Amanda, 33, said: "She walked on her tiptoes from the day she could walk and she became unable to physically put her feet on the floor.

A girl who has only ever walked on her TIPTOES has had her leg amputated after being diagnosed with a rare bone cancer.

Ten-year-old Alison Hayden looked “like a ballerina” and was unable to put her feet flat on the floor until she was fitted with leg splints.

But after doctors noticed a lump growing on her leg, X-rays revealed she had a cancerous tumour – leading to her having her leg cut off below the knee. 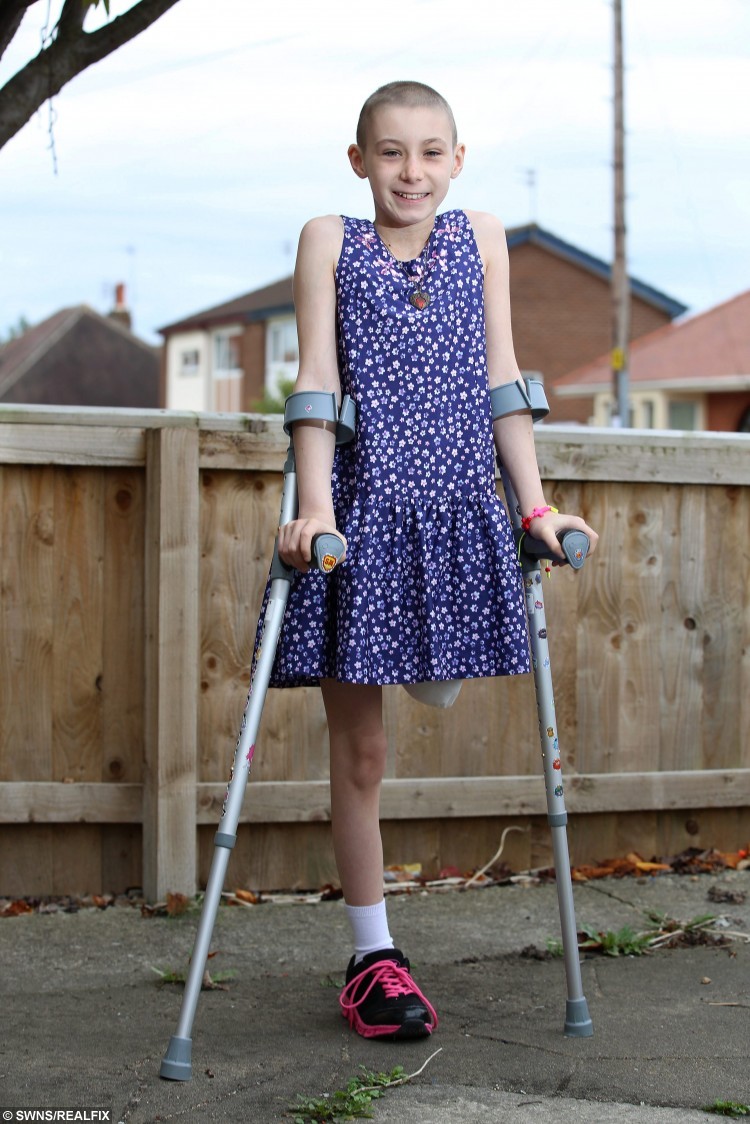 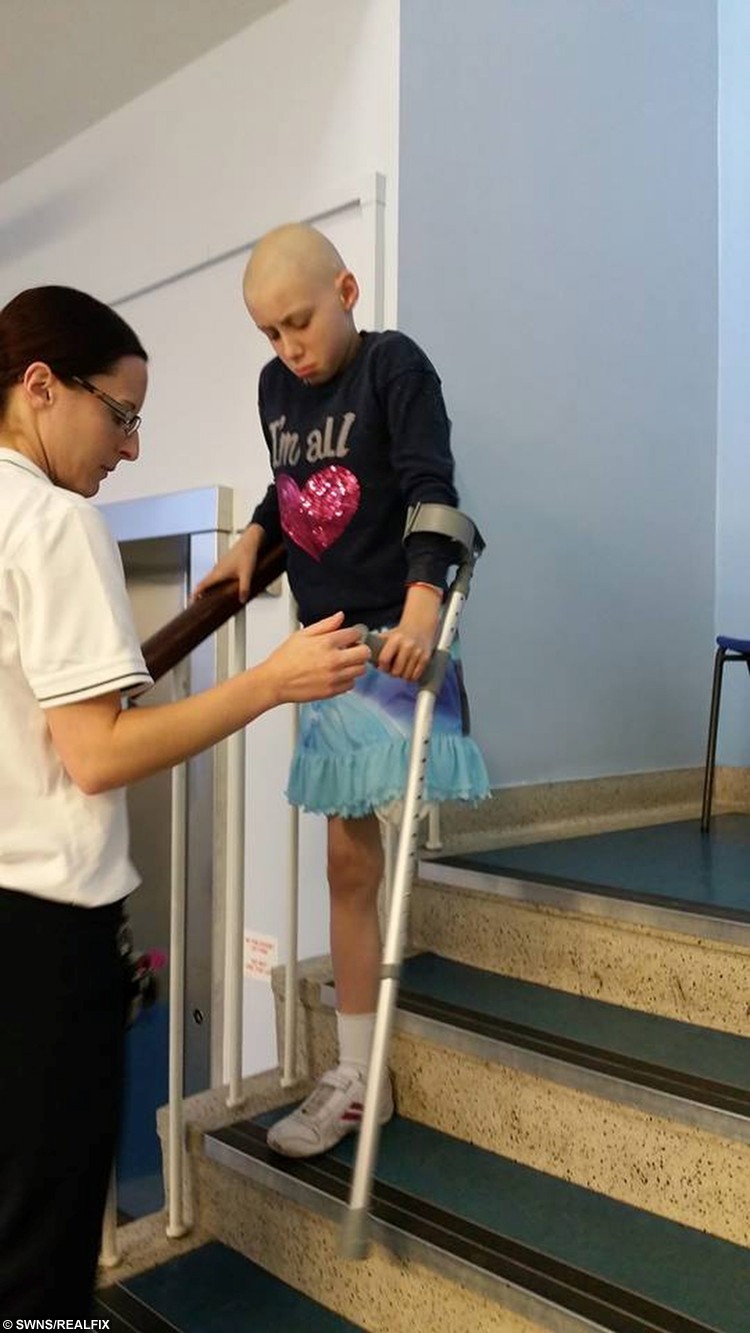 Mum Amanda, 33, said: “She walked on her tiptoes from the day she could walk and she became unable to physically put her feet on the floor.

“A lump appeared on her leg and her doctors thought it was from the strap on the splints rubbing on her skin.

“When they X-rayed her leg, the bone had completely disintegrated and the tumour was found to be cancerous.

“They had no other option to remove her leg as the tumour was too close to the major blood supply. It was devastating but she knew it was the only option.”

Despite the tumour growing in her left leg, Alison showed no symptoms of suffering from osteosarcoma, and even went away on holiday to Butlins the week before she was diagnosed.

Earlier this year, a biopsy confirmed the news Amanda and dad Richard hoped they’d never have to hear and Alison spent her entire summer holidays having chemotherapy at Manchester Children’s Hospital.

But the treatment wasn’t enough, and in September the family were given the devastating news that Alison’s leg had to be amputated. 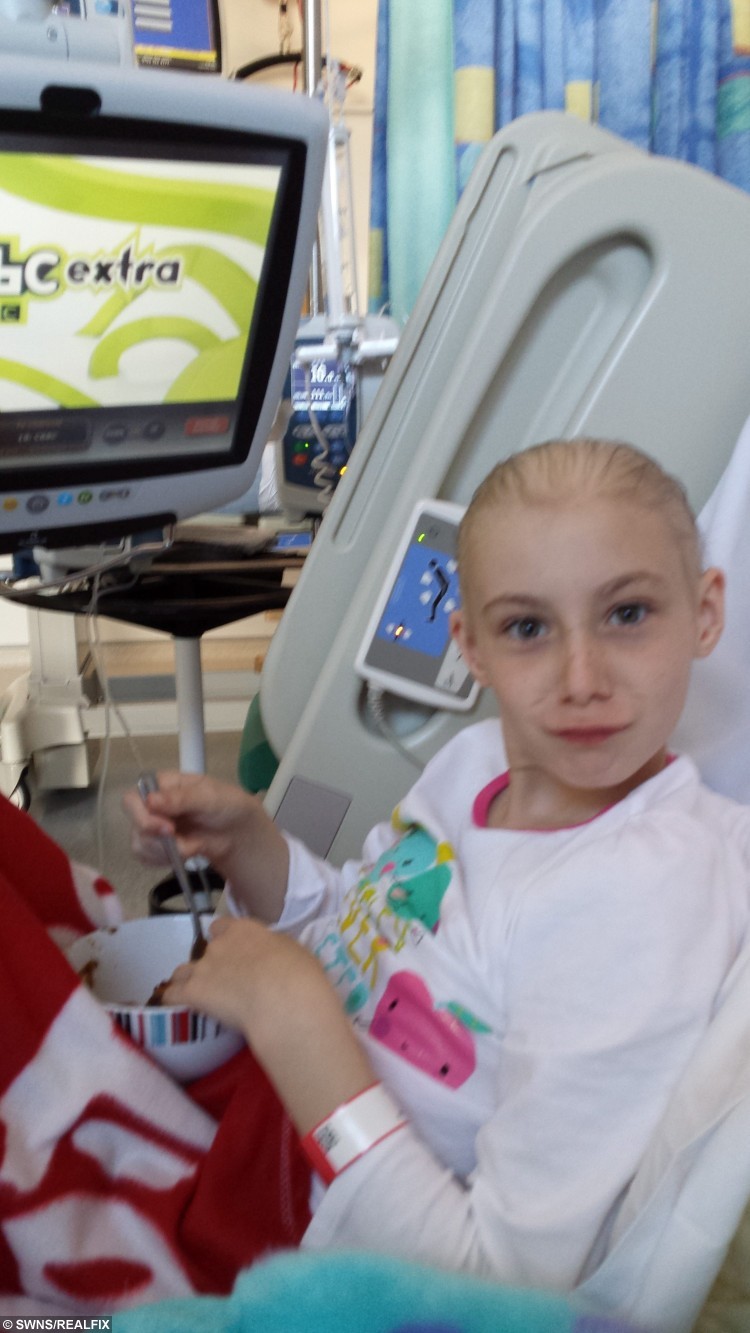 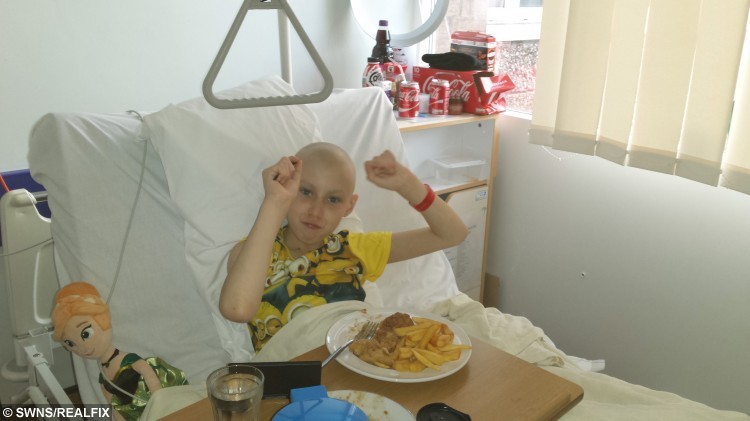 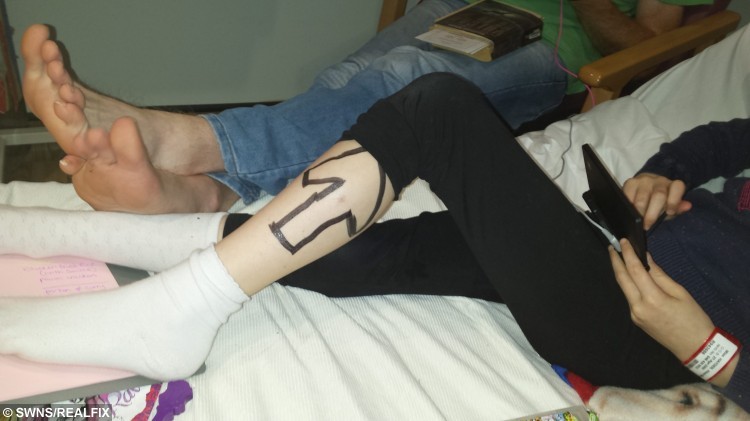 “It all came as a massive shock, the week before her diagnosis she’d been trampolining, swimming and having fun at the funfair,” said Amanda. “She was just like a normal child.

“But then we were told they were unable to save her leg and she would need it amputated.

“It was a huge blow for us all, we had to let it sink in ourselves before telling Alison.

“But she took it really well and within an hour she was joking with her sister Rebecca, 13, that she’d only need to shave one leg.

“She even asked doctors if she could take it home with her afterwards and put it on her shelf.”

Alison was allowed home to Blackpool, Lancs., less than a week after the amputation and she’s now looking forward to being fitted with a prosthetic limb.

While she is entitled to one on the NHS, local sweet shop owners Gilly and Lenny Price are fundraising to help raise £5,000 needed for a model that will allow her to take part in all the activities she wants to.

Mrs Price said: “Kids are our business and she is one of our kids.

“Alison and her sister were among the first customers to step through our door when we opened five years ago.”

Alison said she is “overwhelmed” by the gesture of Mr and Mrs Price, who run Sweet and Sour Sweet Shop in Blackpool, Lancs.

She said: “I think it’s very nice that they are doing this.

“I think l am all right with what has happened because it is for the best – but it has been difficult.”

While removing the tumour has rid her young body of cancer, Alison will soon undergo a second round of chemotherapy to kill off any cells that could develop into cancer at a later date. 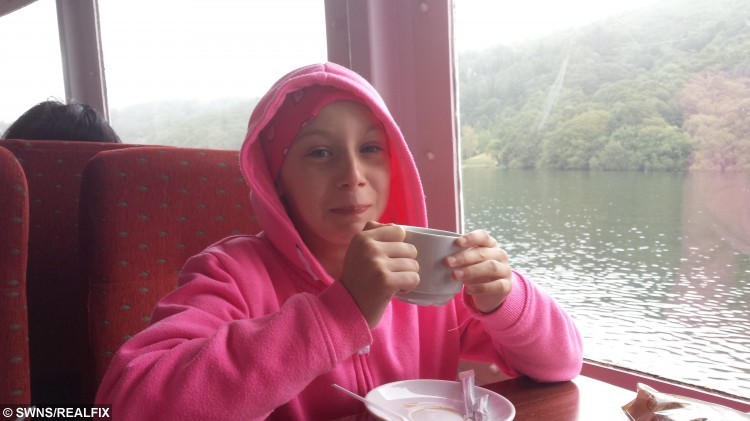 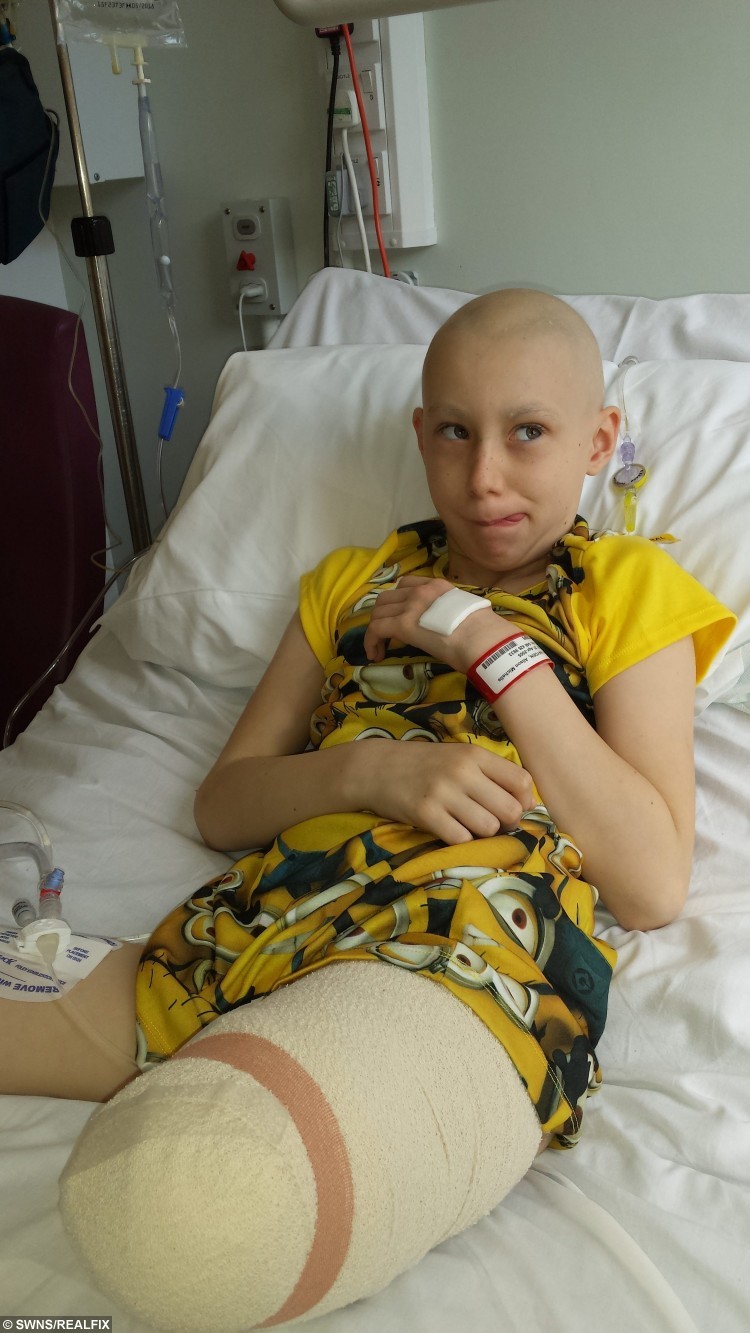 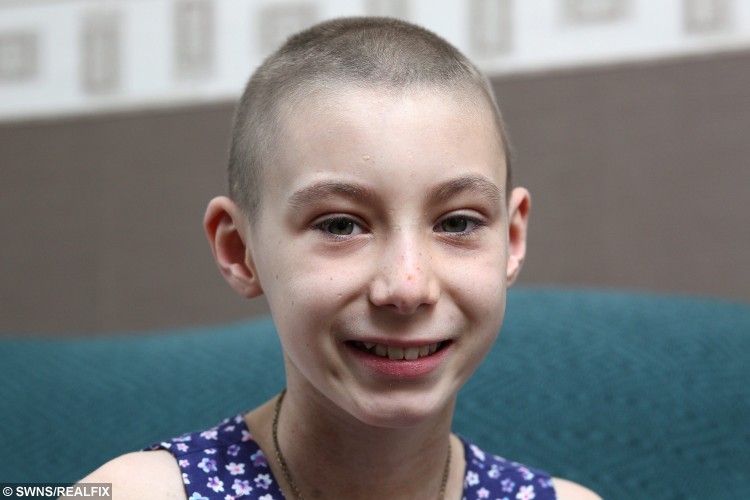 Amanda, who is on carer’s leave from her job at the Department for Work and Pensions, said: “She’s had such a positive outlook about the whole thing, I don’t think the rest of us could have got through it without her.

“We recently got back from Manchester, where she was having wheelchair races up and down the ward. She is always smiling and laughing.

“The cancer ward is a very distressing place to be, there’s no doubt about it, but its also a very happy place.”

“We are looking forward to getting her prosthetic and getting her back to riding her bike.

“When she learns to walk on it, nothing will stop her – she is a very determined young lady.

“We’ve told her she’ll be able to do everything she wants to do and making sure she can is what’s most important to us now.” 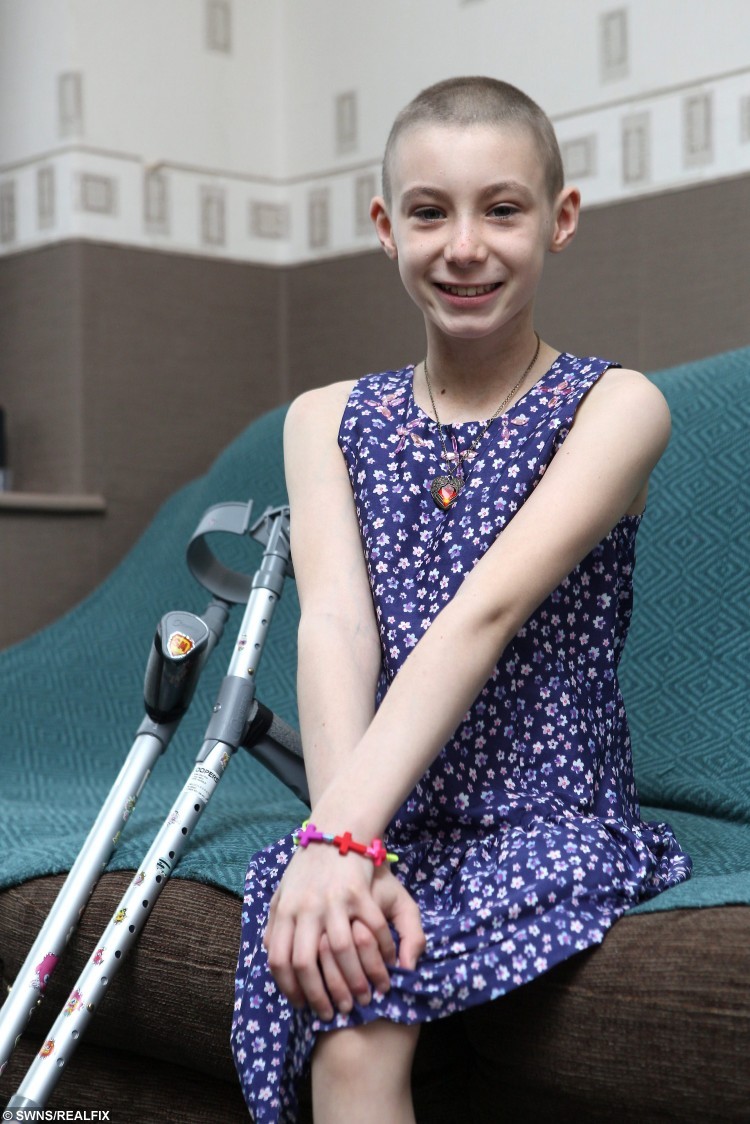 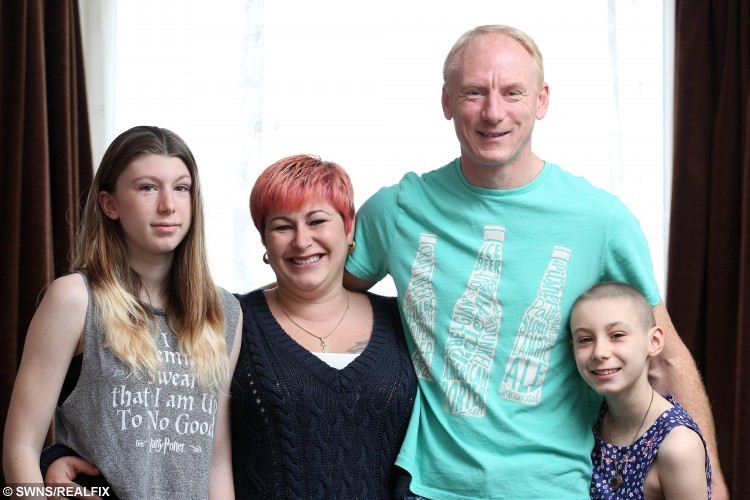 Man loses half his body weight to find love (Spoiler alert: He does!)