Little Skyla Barker, who has Leukaemia. See News Team story NTICANCER: Little Skyla Barker was diagnosed with cancer Ã just days after being treated by medics for tonsillitis. The four-year-old was taken to the doctors after becoming pale and lethargic and was told she had the common tonsil infection. But her relatives were stunned when blood tests two days later revealed Skyla had leukaemia. Now the Sandon Primary School pupil is having chemotherapy and faces two years of treatment.

A brave four-year-old girl has been struck down with cancer – after doctors initially dismissed the deadly disease as TONSILLITIS.

Skyla Barker was taken to her GP by her worried mother after becoming pale and lethargic, but was told she had the common throat infection and sent away.

Mum Shannon Pettit, 20, insisted on blood tests and was left horrified when they revealed days later that her daughter had leukaemia.

Now brave Skyla faces two years of chemotherapy and treatment to fight off the cruel illness that attacks bone marrow.

Shannon, from Longton, Stoke-on-Trent, Staffs., says: “It was so scary when Skyla was diagnosed.

“She is so young. I can’t even describe what went through my mind.

“After her first month of treatment, her legs went weak and she couldn’t walk.

“We’ve been in and out of hospital so much. I just want things to get back to normal. But Skyla is a strong girl.

“In two years’ time my wish is that she will stop her treatment and be clear, I know she will. She will beat this leukaemia, and then, I hope, never have to face it again.

“The doctors must have thought she had more than just tonsillitis.

“Two days after going to the doctors she had blood tests at the Royal Stoke University Hospital and then a bone marrow test at Birmingham Children’s Hospital.

“For the first six weeks she had to have chemotherapy one day every week at the hospital.

“Now she has it every month, but she also has chemotherapy in medicine form at home every day.

“Skyla is in and out of school so it’s very disruptive to her education. I have to plan everything around Skyla taking her medication.”

Skyla’s blood cell count plummeted to 34 instead of the average 130 when she was first diagnosed this summer.

Shannon, who also also has a one-year-old son, Bentley, added: “Kieran and Skyla have always been incredibly close.

“He understands what she’s going through, but Skyla doesn’t really, not properly.

“Bentley knows Skyla is poorly but how can you ever properly explain things.”

Kieran added: “It came as a real shock when we found out Skyla had leukaemia.

“She had been ill for a bit, but we just didn’t know what was wrong.”

Kieran’s mum, Alison Hollran, 50, said: “I see Skyla everyday. We were devastated when she was diagnosed with leukaemia and still don’t know if she’s going to pick up.

“She has always been running about, an extremely happy child. But it got to the stage where she didn’t move at all.

“She was lethargic and didn’t want to get up from the sofa and I instantly knew something was wrong.”

Royal Stoke University Hospital consultant paediatrician Dr Sarah Thompson said: “Skyla has responded well to her initial treatment so we would be quite positive she will have a very good outcome.

“Despite being so young, she has been coping with this incredibly well.

“She’s a gorgeous little girl who is always willing to share her sweets.” 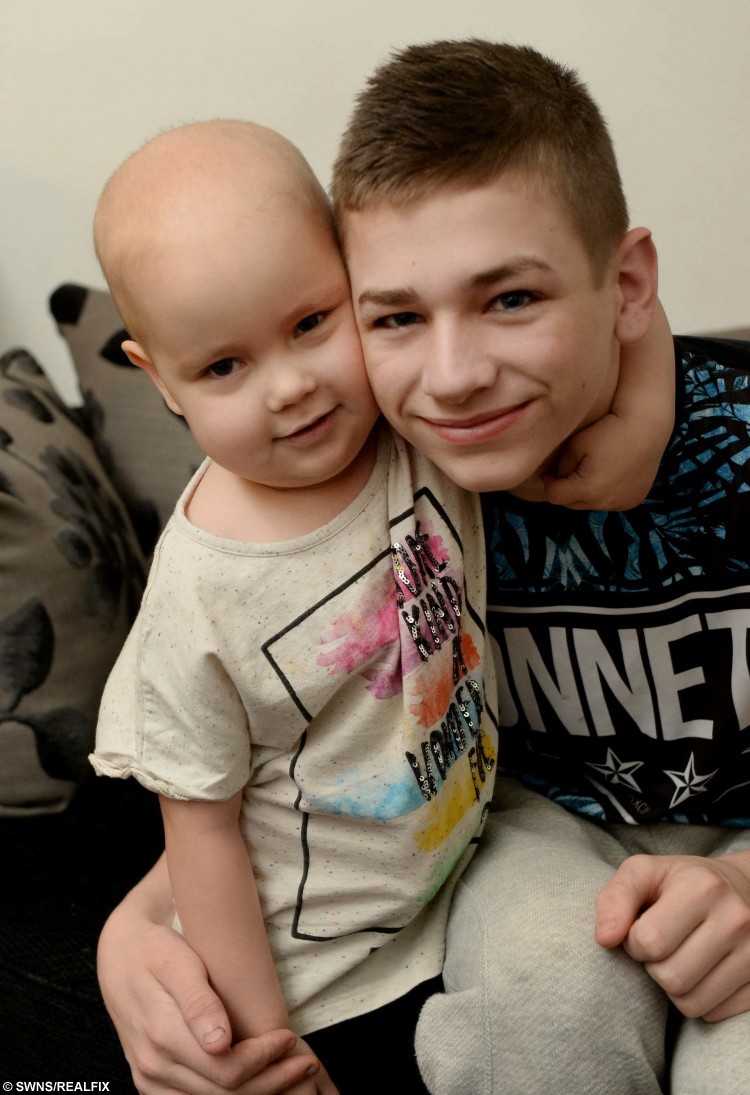 Hilarious moment a Bulldog had to be rescued from a cat flap!