A brave toddler who became one of Britain’s youngest stroke victims and battled a brain tumour is on the road to recovery – with the help of his loving twin brother.

Two-year-old Ronnie was found ‘unresponsive’ and ‘floppy’ in his crib on February 2, 2018 by his father Phil Kerman, 40.

After being rushed to Hull Royal Infirmary and transferred to Leeds, the family’s “worst nightmare” was realised when they were told Ronnie had cysts and a tumour on his brain.

Stents were placed on Ronnie’s brain to drain the cysts as doctors diagnosed him with Neurofibromatosis – a genetic disorder that causes tumours to form on nerve cells.

Father-of-three Phil, who also suffers from a milder form of the condition, said Ronnie’s non-cancerous tumour is now almost half the size and doctors are hoping for him to be ‘tumour-free’ in the next year.

However, side effects of surgery have thinned the arteries sending blood supply to his brain and Ronnie, who is susceptible to further strokes, must now have a further brain operation on October 16 at Leeds General Infirmary.

Phil said Ronnie’s twin brother Robert helps him to care for the tot every day as he courageously begins to recover from the horrific ordeal.

An adorable video shows the moment Robert helpfully gives his twin his dummy as he sits in his specialised chair, while another shows considerate Robert passing his brother a bottle of juice.

Phil said: “The brothers are always playing and Robert helps Ronnie all the time.

“Ronnie is often in his chair and Robert will give him his dummy and play with him.

“Robert doesn’t realise exactly what is wrong with Ronnie yet because of his age but I’m sure they will grow up supporting each other and Robert is so good with him.

“It will when Robert gets a bit older that we can explain everything but he just treats him like anybody else, he is brilliant.”

Ronnie, who has a sister named Emily, 5, shouts ‘Hiya!’ around the family home and is much happier since his operation earlier this year.

Phil and wife Louise, 37, have had to feed Ronnie through a peg in his stomach during his recovery.

The brave tot, who suffered the stroke at just 19 months old, now has a further operation in October.

Phil, who quit his job as a school caretaker to help care for his son, said: “Ronnie’s hair has started to grow back.

“He needs this next operation as the arteries in his brain have shrunk as the tumour has been treated.

“Ronnie could have further strokes so the surgery will hopefully help to prevent this.” 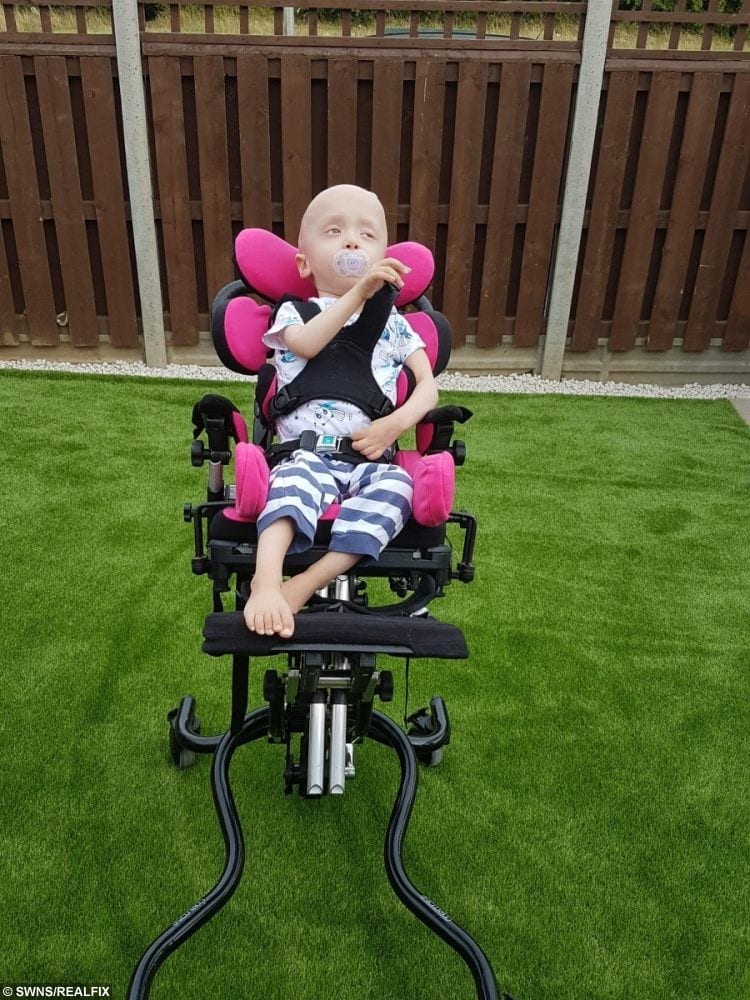 The family have had huge support from Leeds based charity Will’s Way, who provided a £2000 grant to transform their back garden for Ronnie, who is losing his eyesight.

Phil said the whole family could not thank the charity enough.

He said: “I couldn’t be more thankful for what they have done.

“They are absolutely fantastic.

“They got in touch with us and have given us money to renovate the garden so Ronnie can sit out on the decking.”

To find out more, visit: https://willsway.org/