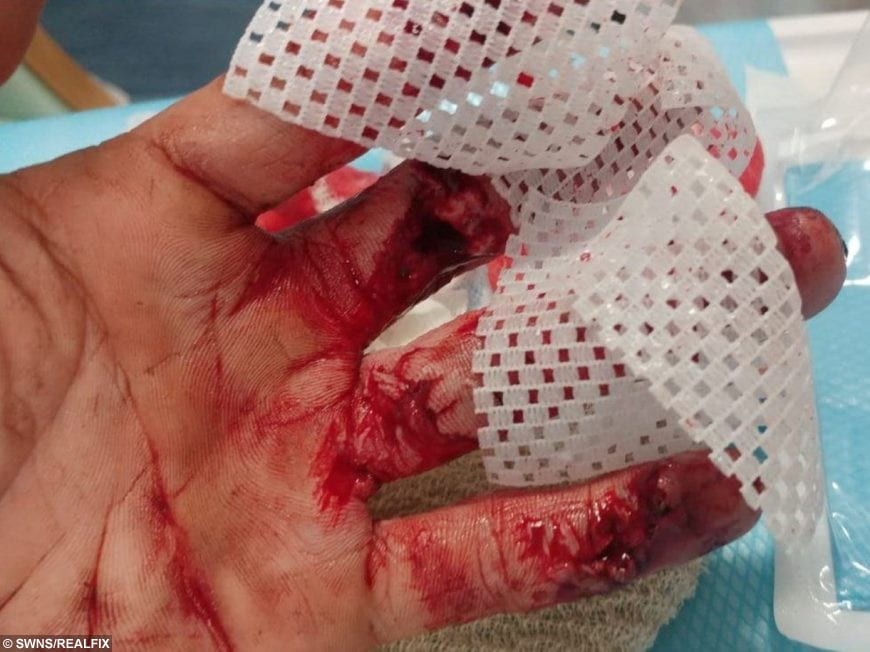 These horrific pictures show the mangled fingers of a bricklayer who was asked to use a powerful saw with no training – and was then laid off by his boss.

Connor Penman, 29, released the gory snaps to ‘let people know’ what his boss at Mike Watt Construction had done, after receiving a £70,000 payout.

The tradesman was working for the construction firm in May 2018 at a yard in Northmuir, Angus, but as business was quiet he was ordered to cut up bits of wood which could be sold as firewood.

Connor, who is from the town, was left to his own devices to learn how to use a chop saw, which can spin at speeds of up to 50,000rpm.

He ‘guessed’ how to make it work – but when the saw struck a nail which was lodged in wood, the machine lurched to one side and Connor’s left hand was nearly severed with his fingers ‘left hanging off’.

Medics at Ninewells Hospital in Dundee were able to save his hand after a seven-hour emergency operation and a vein transplant, and Connor had to take four months off work to recover.

But when he returned to work, he was let go by his boss.

Connnor said: “My boss just told me to get on with it and left me to it – I was on my own so there was no one else around to ask for help.

“I was left to guess how to use this machine and there was an issue with the guard that protected the blade.

“It was all a blur but I think the guard pinged back after the blade jammed while it hit a nail in the wood – this then caused the whole machine to kind of lurch and it caught my hand.

“My middle finger and forefinger was just hanging off.

“I’m okay when it comes to pain and stuff but with this I remember screaming.”

When he returned to work in August 2018, he was laid off on the spot.

Connor added: “I couldn’t believe the cheek of it when he let me go as my injuries were his fault.

“People need to know what he did and how he reacted because it’s simply not right.”

He has been awarded a £70,000 payout after a personal injury claim through law firm Digby Brown.

The legal case proved Mike Watt Construction was negligent because it did not give Connor the training needed to operate the chop saw, and also failed to risk assess the task he was engaged in and provide him with suitable equipment to allow him to carry out the task safely.

Connor added: “Although my hand will never be the same winning the legal case means I can make up for lost wages, get a mortgage for a home and get the recognition I needed to prove I was right and prove Mike Watt was in the wrong.”

Robert Kernaghan from Digby Brown’s Dundee office said: “Our investigations showed Mike Watt Construction failed in its duty of care so we are pleased to have helped Mr Penman secure rightful damages.”

« Previous post One Of Britain's Oldest Cleaners Has Returned To Work, Two Months After Breaking Her Hip In Nasty Fall
Next article » Five-Year-Old With Cerebral Palsy Beamed From Ear To Ear After Making Her First Independent Journey To The Car - Thanks To Her Own Little Steps