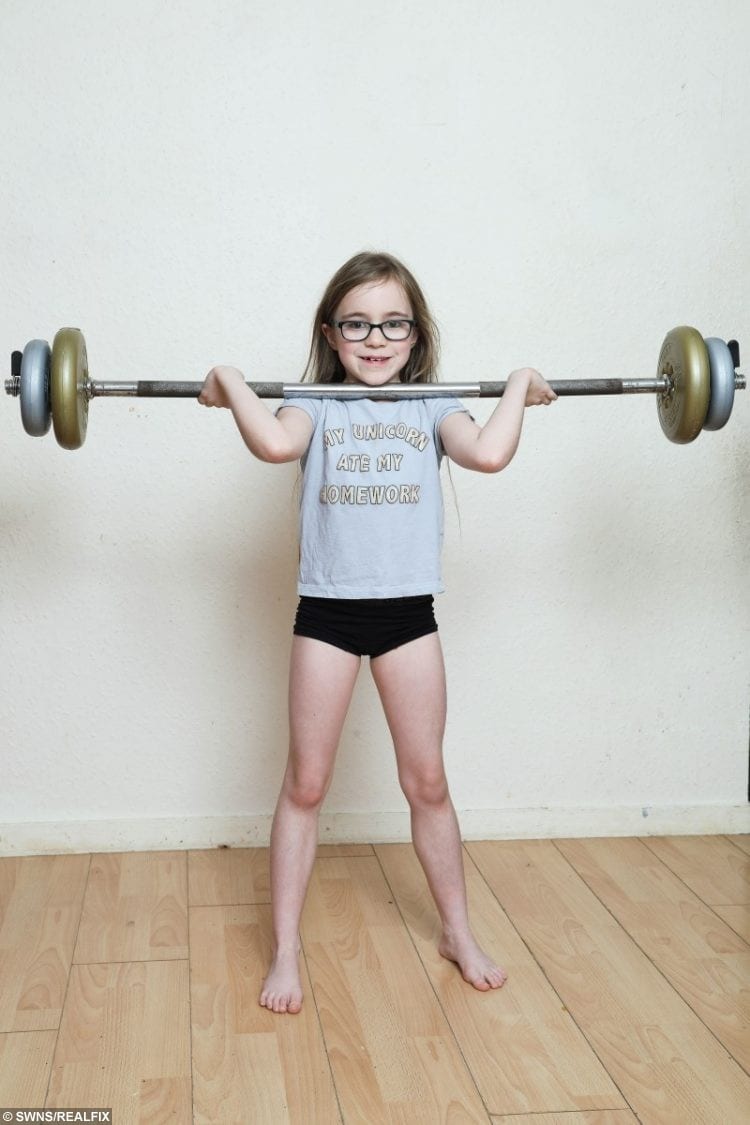 Aeryn works out at her home in Telford, Shrops., four nights a week and is taking tips from professional weightlifters and bodybuilders.

She said: “What made me want to start training was watching weightlifting videos on Facebook.

“That really inspired me. I wanted to be as strong as them and just wanted to see how much I could lift.

“What I like about doing it is moving my body around – that’s what I enjoy.

“I know I’m only young but I’m learning the proper techniques of lifting and holding so hopefully in the future I can compete.

“I love everything about weightlifting, there’s always something new to learn or new foods and techniques to try out.

“It makes me feel really good when I deadlift a heavier weight because I feel like I’m getting stronger.” 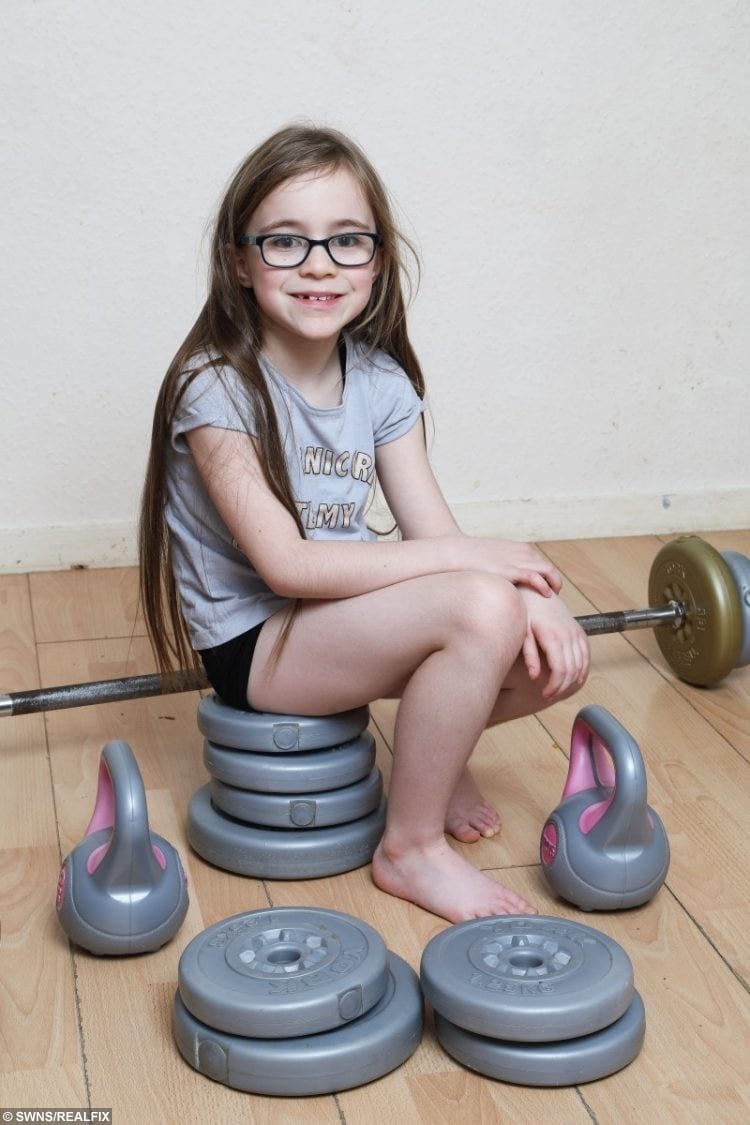 Aeryn, who turned eight last month, has asked for a kettlebell for Christmas and will join a gym in the new year.

Her proud dad Craig, 38, a freelance copywriter and mum Melody, 39, an officer clerk, are tipping their daughter for future weightlifting success.

He said: “It all started a year or so ago when I was trying to lose some weight, so was following different videos on YouTube.

“I came across CrossFit which has a weightlifting component.

“Aeryn saw these CrossFitters doing their thing and she said ‘I want to do that’. It just went from there.

“I refused to allow her to do anything for two to three months while she built up a bit of
strength.

“She built herself a bar out of Lego that weighed about 50 to 100 grams.

“Then I said ‘you can use my bar, but not have any weight on it’. That weighed around 3kg.

“Then she had a little weight on it.

“We talked to weightlifting coaches. They said she shouldn’t be lifting too much at this stage but they were very impressed with her strength.

“When she is doing a deadlift, she can do 35kg.

“A professional might be able to lift two times their body weight.

“But they don’t normally start doing that until they are a teenager – 13 or 14.

“We have done our homework and the British Weight Lifting (BWL) organisation say children’s bodies are still susceptible to micro-fractures.

“We are erring on the side of caution with how much we let Aeryn lift while encouraging her as much as we can. 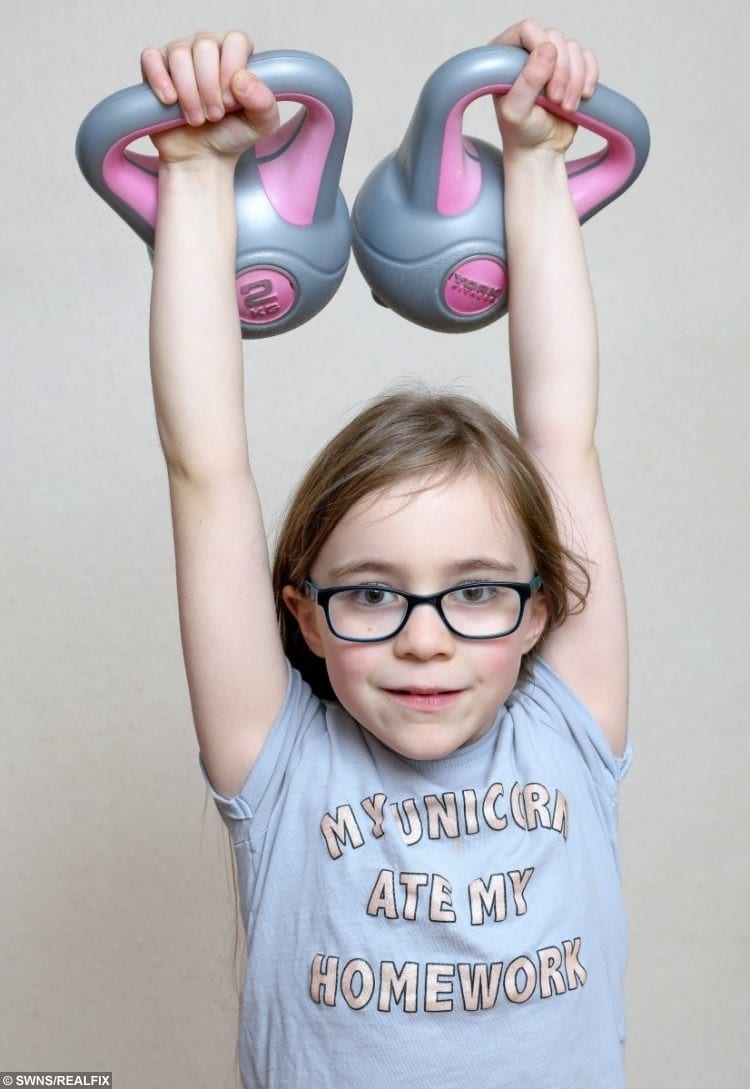 “She wants to win the Olympics when she is older.

“We think she is the only seven-year-old in the country weightlifting on such a regular basis.

“For her birthday we got her her own barbell and she’s asked Father Christmas for a kettlebell – how many kids ask Santa for that?

“We have reached out to as many gyms as we can, but they have said we cannot allow someone that age to do it for insurance purposes.

“A gym could coach her on her technique – her foot placement, where to put her hands on the bar, how fast you should move.

“These are things I don’t know.

“Her teacher at school is quite shocked because Aeryn can lift as much as she weighs.

“We are incredibly proud of her. There’s no stopping her.”