Chris Degnan re-proposes to his wife Emma. A Lincolnshire fast food van man lost 11st in eight months and "re-proposed" to his wife in front of the packed gym that helped him do it. See NTI story NTISLIM. Chris Degnan, from Anwick - near Sleaford, Lincs, weighed a whopping 27st this time last year but decided to slim down after doctors said he should undergo a gastric band operation in February. After he was told what the procedure involved and what the risks were, 31-year-old Chris decided the easier option would be to join his local gym. Now, eight months on, Chris has dropped down to 16st and lost six clothes sizes - and in celebration decided to "re-propose" to his wife of eight years.

A fast food seller who weighed the same as two baby elephants after getting hooked on his own burgers lost a whopping 11 stone – when he REFUSED to have a gastric band.

Chris Degnan, 31, tipped the scales at 27 stone after years of gorging on a daily diet of fry-ups, burgers and chips, all washed down with bottles of fizzy pop.

At his heaviest, Chris was eating a belt-busting 5,000 calories a day and had a BMI of 58 – which classed him as very severely obese.

He finally decided to fight the flab in February this year after concerned doctors told him he was eating himself to death.

Doctors suggested he have a gastric band fitted but he refused and instead started eating healthy high-protein dishes and working out at his local gym twice a day.

The dad-of-two has now lost a staggering 11 stone in eight months and dropped from a size 63-inch waist to a svelte 36-inch. 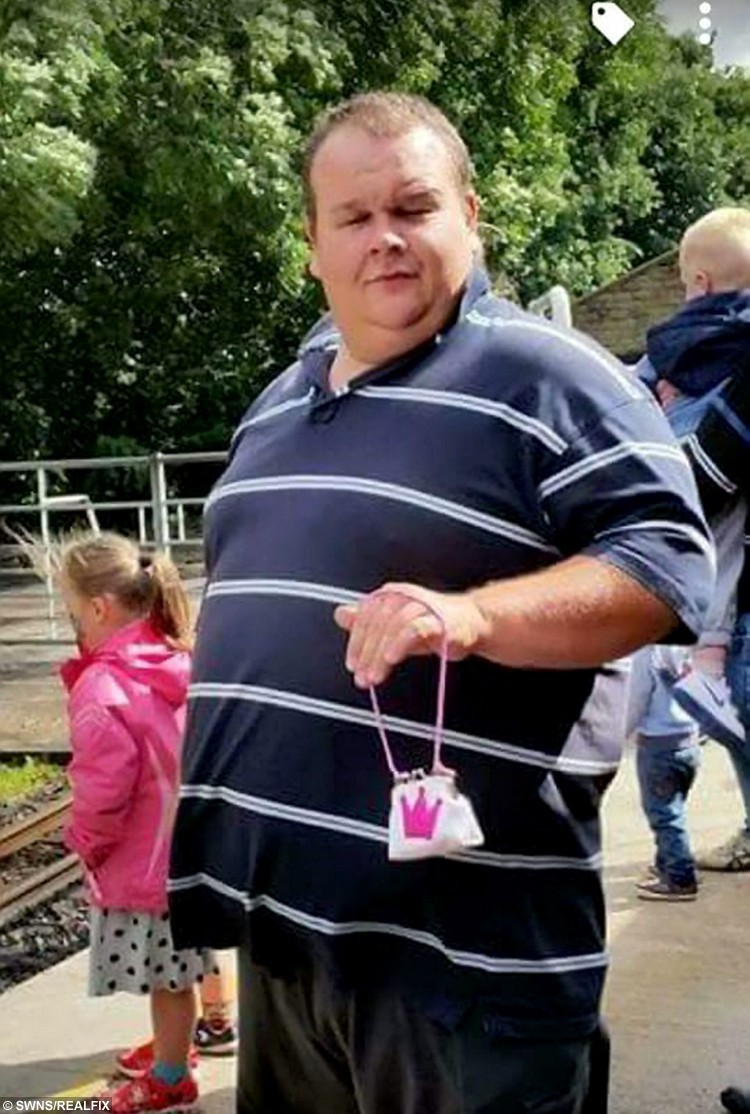 Chris, who runs the Griddle Snack Bar in Sleaford, Lincs., said: “My diet was terrible. It involved lots and lots of calories.

“Every day, I just ate what I wanted with little thought to my health.

“I’d have a big fry-up in the morning followed by a burger and chips at lunch and sometimes the same again at night. I drank litres of fizzy drinks.

“I had always been a big man and losing weight wasn’t really at the top of my list. Food was all around me all day and it was just easy to tuck in.

“But in February doctors advised me to have a gastric band operation after I went for a check-up.

“I had originally gone for an appointment for an ear infection but the nurse there brought up the fact that, due to my weight and age, I was a prime candidate for gastric band surgery.

“I was told I was putting my health at risk if I didn’t have the operation.”

“They were concerned about me getting diabetes and other health problems if I didn’t take the surgery.

“They said the consequences would be dire. It was risky but, at the same time, I wasn’t comfortable with the operation.

“They weren’t as blunt as this but it was along the lines I would die if I didn’t have the gastric band.

“I saw what was involved and it scared the life out of me.” 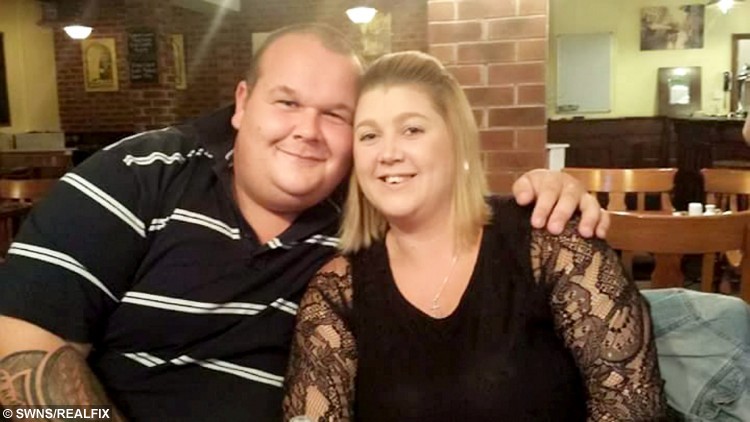 “Gastric band operations are complex. There are a lot of risks attached to them. You could go in, have the surgery and then have to have further surgery. It scared me.

“I was basically eating myself to death.

“So that day, I joined the gym that same day and I haven’t eaten a burger since. It was the trigger for me.

“My diet is very good nowadays. I am on a nutritious plan, which involves a lot of carbs and meals we prepare fresh every day, like pasta meals.

“They can be a bit boring, like chicken and tuna, but they are very good for you and I can see the result of that.”

“So now I feel really, really good – I feel like a new man.

“I go to the gym twice a day, seven days a week. My personal trainer put on my regime, which I do every day. It is weights and cardio training mainly.”

Chris celebrated getting his weight down to 16 stone by surprising his wife Emma, 27, by re-proposing to her in the gym on their eighth wedding anniversary.

He added: “The gym transformed me to the new man I am now so I popped the question in the place that helped him shed the weight.

“Everyone at the gym has been so supportive – they are all like family now, so it seemed like the right place to do it.”

The couple, who have children Hannah, seven and four-year-old son Kayden, plan to renew their marriage vows at a ceremony later this year.

Emma, who has also shed a stone since joining the gym with Chris, said: “Chris has always, and always will be, the same great bloke to me – weight or no weight.” 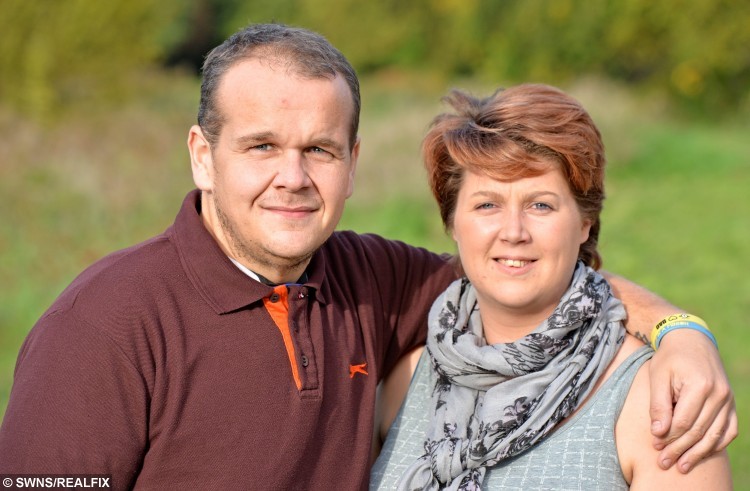 “But I’m very happy and excited for him to be healthier and be here longer for me and our kids.

“I was very shocked when he re-proposed.

“I even swore at him but once the shock wore off my breath was completely taken away and I couldn’t believe how well him, our friends and all the leisure centre staff kept it all quiet.” 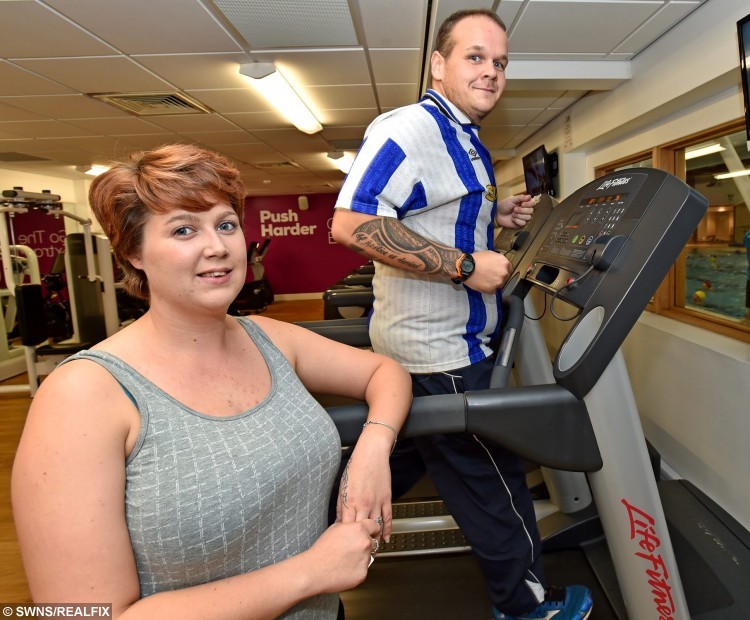 Britain’s youngest fashion icon is so in demand she gets a free outfit every day!