Cat Had Miracle Escape After Plummeting 100ft From Block Of Flats

A cat had a miracle escape and is back on its paws after it plummeted 100ft from a block of flats.

A cat had a miracle escape and is back on its paws – after it plummeted 100ft from a block of flats.

The young white-and-tabby female suffered multiple injuries including a broken jaw after apparently being lobbed off a balcony.

CCTV controllers contacted the RSPCA after they watched in horror as cameras captured the cat plummeting from a 16-storey high rise in Ladywood, Birmingham on April 6.

They went outside and found the cat lying injured on the ground and she was rushed to RSPCA Newbrook Farm Animal Hospital in Frankley Green, Birmingham.

The poorly puss is currently recovering at the hospital and the RSPCA is appealing for information about the owner and who threw her off the balcony.

RSPCA inspector Mike Scargill said: “This is a very worrying incident and the cat is extremely lucky to be alive.

“At the moment we’ve got very little information so the details of exactly what happened are open to speculation for now, but I have visited the block of flats and made initial inquiries but no information has been forthcoming just yet.

“I am appealing to the general public for any information that might help me investigate what happened. 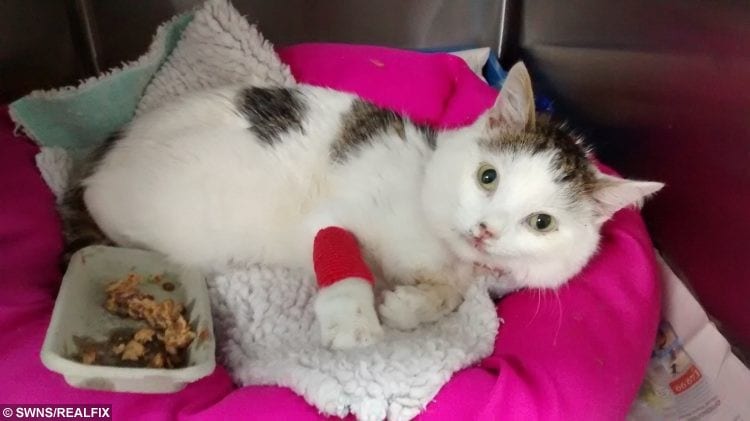 “The cat may have slipped and fallen on her own, but it’s very concerning to hear that the CCTV controllers think they may have seen someone actually throw the cat from the building, so I’m very keen to speak with anyone with information who might be able to tell us more.

“I am also keen to find the person who owns this cat.

“She’s a young white female, with white patches of tabby markings on her tail, back and head.

“She’s really been through it and suffering a broken jaw would have been incredibly painful for her, so I’m sure being reunited with her owners will give her a much-needed boost.”