Jett Morris pictured just after he was born at Queen Alexandra Hospital, Portsmouth. See MASONS story MNMIRACLE: A couple who claim they were pressured to abort her 'non-viable' unborn baby son are celebrating his first birthday after proving doctors wrong. Little Jett (corr) Morris survived for five weeks in the womb after his mum's waters broke when she was just 20 weeks pregnant. He was born at 25 weeks weighing just 1.4lbs - less than a bag of sugar - and has now grown into a healthy one year-old. But parents Mhairi and Paul say their baby boy would not be here today if they had succumbed to pressure from medics to terminate the pregnancy.

A couple who claim they were pressured to abort their ‘non-viable’ unborn baby son have celebrated his first birthday after proving doctors wrong.

Little Jett Morris survived for five weeks in the womb after his mum’s waters broke when she was just 20 weeks pregnant.

He was born prematurely at 25 weeks weighing just 1.4lbs – less than a bag of sugar – and has now grown into a healthy one year-old.

But parents Mhairi and Paul say Jett would not be here today if they had given in to pressure from medics to end the pregnancy at East Surrey Hospital.

They claim staff gave them just five minutes to come to terms with a termination and even wheeled in a trolley to take Mhairi to theatre.

She refused to go and then found herself facing repeated calls from nurses over the next few days to have an abortion.

But she refused and remained convinced her unborn baby was healthy and five weeks later he was born. 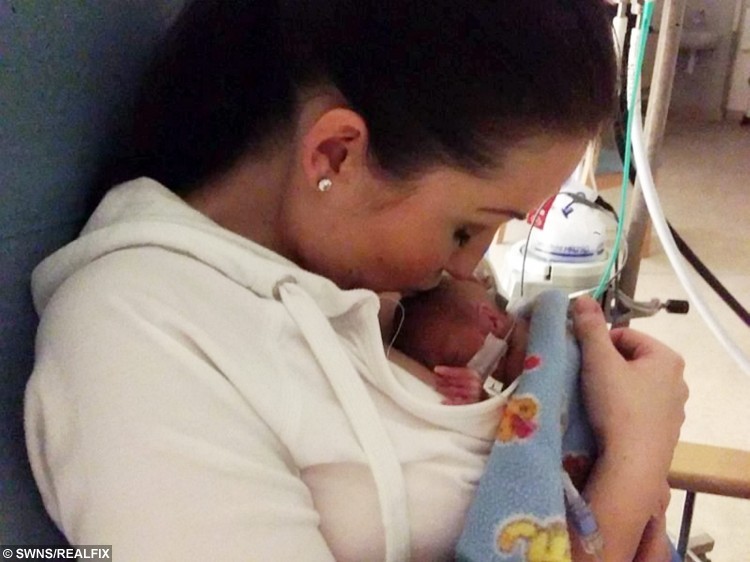 Mhairi, 34, said: “They didn’t see him as a child yet, they just called him a ‘non-viable foetus’. It was cold and I was devastated.

“I was in the early pregnancy unit and no-one from paediatrics came to talk to me about my other options.

“But I’d just had a 20 week scan and everything was perfect and finding out it was a boy made it very hard to accept a termination.”

“The doctor said ‘we’re going to get you into theatre. You have to have a termination because there’s nothing we can do’.”

She added: “I understand doctors have to tell you the worst case scenario and be blunt, but no two people on this Earth are exactly the same and doctors didn’t even give Jett a chance.”

“When he came back in and Paul and I had talked we told him I wouldn’t be going into theatre and the doctor looked at his watch and rolled his eyes at me, as if I was wasting time.

She was later diagnosed with placenta praevia – where the placenta forms underneath the baby and can cause bleeding and infection.

She was told she was likely to go into labour within 48 hours and the baby would die – but days later she still hadn’t given birth and was allowed to go home.

Mhairi returned home to Crawley, West Sussex with Paul, 36, but 12 days later she started bleeding and was rushed to hospital.

The local Trust was only equipped to deal with children born after 28 weeks and the couple had to travel 80 miles to Portsmouth Hospital.

Doctors there warned their son could be brain damaged and would probably die at birth because his lungs would not be developed.

But Jett defied the odds and came out kicking and wriggling on December 6, 2013 – and even let out a small “squeak” before being rushed to an incubator.

He suffered with chronic lung disease and jaundice – which he quickly recovered from after his lungs and organs developed.

He was finally allowed home on March 5 – almost three weeks before his original due date of March 24.

Though Jett has two small holes in his heart it is not thought they will ever cause a problem for him and and he was taken off an oxygen machine in May.

Mhairi, who runs a children’s boutique with Paul, added: “We have a happy outcome but I worry that other mothers could have had an abortion when their babies might have survived.

“I was given such a bleak outlook that I kept thinking ‘he’s not supposed to be healthy’ and was waiting for something to happen, but it never did.”

Mhairi said she was forced to Google her options rather than being given them by medics – and now hopes her story will be seen by other pregnant women doing the same thing.

Surrey and Sussex Healthcare NHS Trust’s Chief Executive Michael Wilson said they were working with Mhairi to resolve her concerns about her treatment.

He said: “From June 2013, while Mhairi was with us, it’s our opinion that she received high quality clinical care and was provided with information about the range of options available to her in her circumstances, as well as having these options discussed in detail.”

“The team who cared for her pulled out all stops to keep both her and her child safe throughout her high-risk pregnancy and following this, we transferred her to a more specialist hospital so that she received the best possible care for her condition.

“We are delighted that over a year on, both mother and son are healthy and well.

“As a Trust, we strive to learn from all the feedback we receive from our patients to continually improve our service.

” We have only very recently learned of her concerns as no complaints were raised earlier – had they been, we would gotten in touch with her directly and looked into what had taken place.

“We are now working closely with her and her family to understand what happened in detail.”