Collect of Rory Embling the son of Chris Embling who has won Games Room of teh year 2015. . See SWNS story SWCAVE; A devoted dad who spent thousands on building a games room as a tribute to his dead son has been crowned UK man cave champion. Chris Embling, 61, saw off competition from more than 1,000 people around the country to win the UK Games Room of the Year 2015 after receiving 20 per cent of the public vote - to win a grand prize of 3,000. His man cave is named 'Rory's Return' in memory of Chris's Leeds football-mad son who was struck down by sudden arrhythmic death syndrome (SADS) on May 17 last year aged just 26. The purpose-built pinewood cabin - located in the garden of Chris's home in Ackworth, Yorks. - consists of a lounge and bar room with draught ale and cider on tap.

A devoted dad who spent thousands on building a games room as a tribute to his dead son has been crowned UK man cave champion.

His man cave is named ‘Rory’s Return’ in memory of Chris’s Leeds football-mad son who was struck down by sudden arrhythmic death syndrome (SADS) on May 17 last year aged just 26.

The purpose-built pinewood cabin – located in the garden of Chris’s home in Ackworth, Yorks. – consists of a lounge and bar room with draught ale and cider on tap. 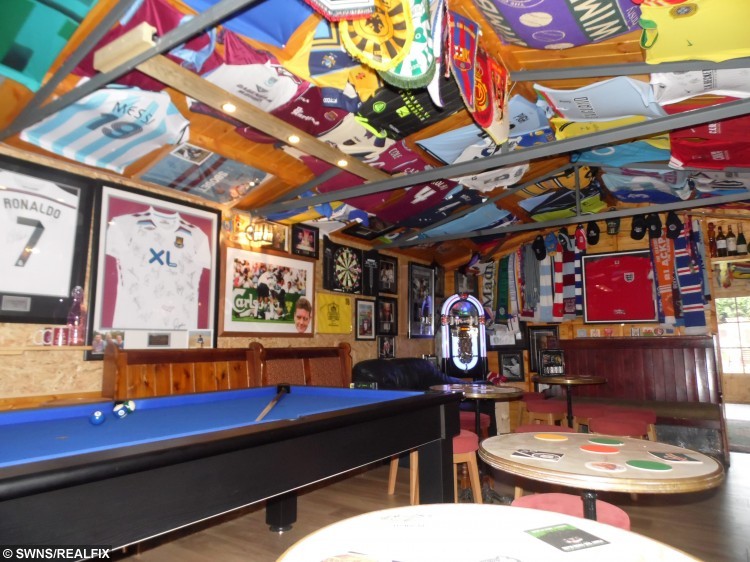 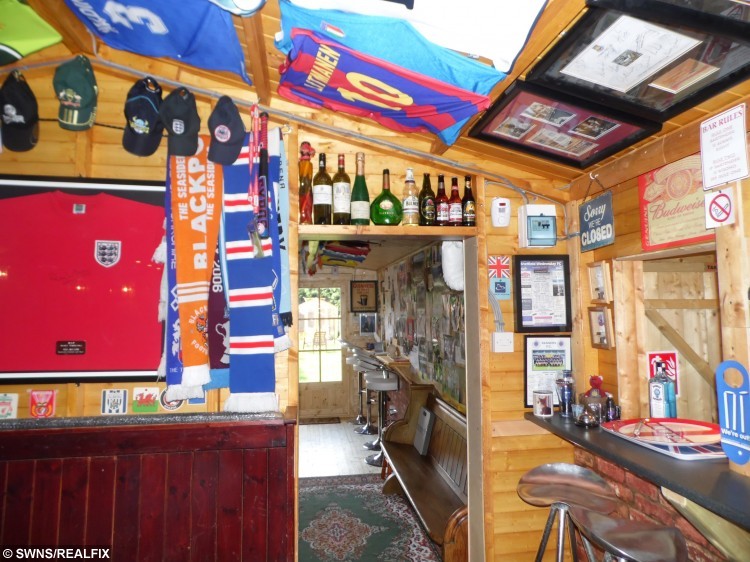 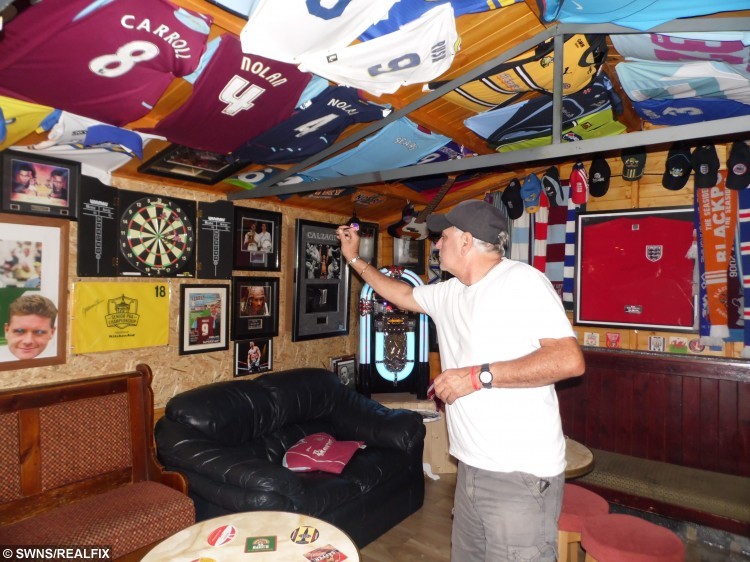 The walls and ceilings are covered in hundreds of items of donated sporting memorabilia, including football shirts signed by global superstars Cristiano Ronaldo and Lionel Messi.

There are several pictures of Rory taken with Leeds United stars and a framed shirt worn in the side’s 1972 FA Cup winning final – signed by nine of the players.

There is also a pool table, dartboard and a jukebox and outside is a beer garden which can fit up to 200 people.

Retired PE teacher Chris said he his wife Anne, 56, will use the prize money to fund the work of the charity they set up in their son’s name – The Rory James Embling Foundation.

He says: “The inspiration behind this was the unfortunate 2014 we had in which we lost our son.

“We sat and discussed what we could do to create a fitting memorial to Rory.

“I had a chat with a few of his friends and they said Rory always wanted to own a sports bar.

“It took about three and a half months to build the games room from scratch.

“I worked on it with three other people – a builder, an electrician and a plumber.

“We wrote a lot of letters to Rory’s favourite sporting personalities and we got more than 400 donations of memorabilia.” 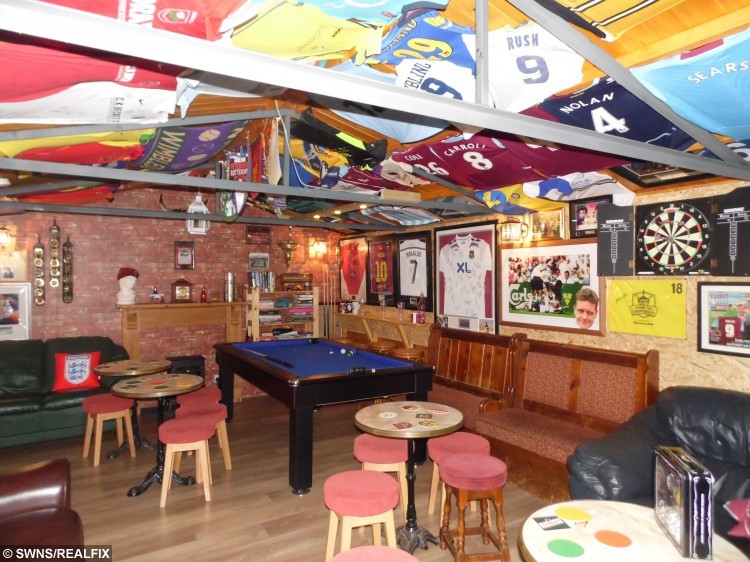 “Rory was a huge football fan and we wrote to every ground he’d ever visited and we even got letters of empathy from Arsenal manager Arsene Wenger and the Chelsea captain John Terry.

“I can honestly say this is the first time in 17 months that I’ve felt happy. It means so much for us and Rory would be delighted.

“We’re absolutely thrilled to win. It means so much to us. We built it as a tribute to Rory and as a central focus of our fund raising efforts for the charity Cardiac Risk in the Young (CRY).

“Our current goal is to raise £5,000 for the foundation which we set up in Rory’s name.”

“That’s enough to provide an electrocardiogram (ECG) machine that can test youngsters to see if they are in danger of cardiac arrest.

“If a young person is screened you can clear up about 95 per cent of undiagnosed problems, particularly genetic ones

“The £3,000 from the competition means that we’re on track to raise enough to secure an ECG machine in 2016.

“The testing doesn’t detect SADS. The Bolton Wanderers midfielder Fabrica Muamba had it and he’d had tests. But he got away for it, Rory didn’t.

“But 16 people die in the UK every week through undiagnosed heart conditions and if we want to help save as many of them as possible.”

Rory studied a law degree at Leeds Metropolitan University before becoming a paralegal.

He was a season ticket holder at Elland Road and travelled all over the country to support his team.

Rory was travelling to watch a WWE wrestling event at Nottingham Arena with a friend when he passed out on the M1 near Sheffield. He was rushed to Chesterfield Royal Hospital where he was later pronounced dead.

His last words were about Leeds United.

Retired banker Anne has been married to Chris for 36 years and the couple have one other child together.

Yesterday she said: “Obviously I’m really pleased that we have won the competition. This money brings us much closer to our fund raising target of £5,000.

“But of course, I have mixed feelings about everything because it’s bittersweet.

“Rory would have absolutely loved the pub we’ve created. It was his secret dream and we did this with him in mind. I just think about how much he would have loved it.”

The Emblings saw off fierce competition to scoop the prize after the contestants were whittled down to a shortlist of 10 regional champions and five wildcard entries.

One of these included an attic which was transformed into an American-style pool room and bar and a garage which has been converted into an amusement arcade.

South East champion Adam’s man pad is crammed full of pinball machines and LED lights while the North West’s Barry has a sleek loft centred on a pool table and hand-built bar.

Massimo’s den in the Midlands featured football memorabilia, a table-football machine and a pool table while Les in the North East filled his room with an arcade, bar and cinema.

Ben in East England stripped out his double garage and created a barn-style man cave with a pool table, dartboard and a bar handmade from wooden pallets. 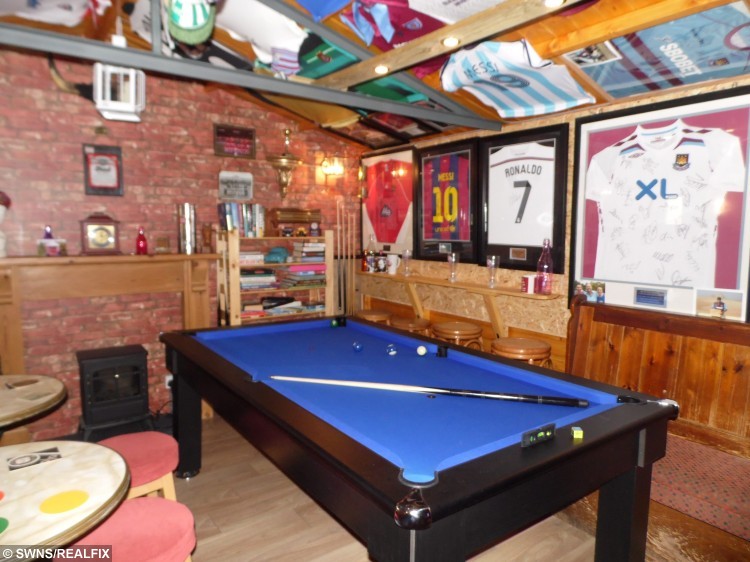 Andy Beresford, Managing Director of Home Leisure Direct, who ran the contest, said: “The competition has been fantastic.

“We’ve seen some marvellous entries and the response from the voting public has been astounding.

“But it was Chris’s entry that obviously struck a chord with the voters as his was the clear favourite amongst the thousands of votes that were cast.

“The story behind Chris’s games room is tremendously sad and he had some fantastic local support during the voting process which helped to secure the win.

“We’re absolutely delighted that such a worthy entry was the eventual winner and thrilled that the winning pot is going to such a good cause.”

For more information about SADS and to donate to Rory’s foundation go to www.c-r-y.org.uk/memorial-funds/rory-embling.