The family of disabled teenager who had his £2,500 mobility trashed by bullies have thanked generous wellwishers who raised enough money to replace it in just 24 hours.

Last week he started using a new mobility scooter to give him extra independence following a six-year fundraising campign.

But just two days later cruel bullies took the scooter and smashed it into parked cars before wrecking the motor after Liam left it outside City of Bristol College.

His distraught family started a crowdfunding page and within 24 hours it had reached its £2,500 target.

Liam’s aunt, Claire Higgins, 36, said: “The scooter meant he could have a life, meant he was free.

“He’s 16, so he doesn’t want his parents or an adult pushing him around. It was his lifeline.

“The scooter meant he could get to college and it was the first time he’s been able to go off on his own, and do his own thing.

“It was the first time he was independent and going to college by himself.

“It was amazing to see him grow and become more confident – it has meant so much to him.

“Raising another £2,500 in just one day after the scooter was vandalised has been brilliant.

“People’s comments have been lovely, and it’s been nice for Liam to see people rallying round to help him.” 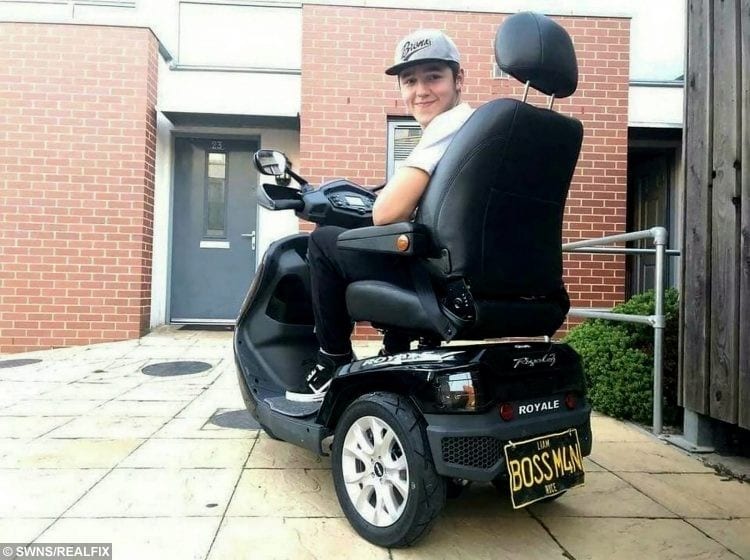 The scooter, which was left outside a college building whilst Liam was in a class, was taken on Thursday (18/10) lunchtime by a gang of other students.

It was pushed around and trashed, destroying the motor and electrics and leaving the scooter unusable.

Claire added: “What happened was that Liam would be met by a member of staff at the college when he arrived, who would bring out the standard wheelchair, to be used inside the college building.

“The scooter must’ve been left outside and he came out at Thursday lunchtime to find it had gone.

“A group of lads had pushed it around, crashed it and damaged it. The worst bit is the motor and the electrics have gone, it’s unusable.

“The scooter is now still at the college, it’s unmovable and I don’t know what is going to happen to it.

“The scooter had not yet been insured because Liam wanted to start using it straight away. We were devastated.”

A fundraising organisation was set up for Liam in 2012, at the time of his diagnosis – when he became the only person in Bristol to be diagnosed with Freidreich’s Ataxia.

And the community has now once again rallied around Liam and his family, with over £2,600 donated in just over 24 hours to help repair or replace Liam’s scooter.

He wrote: “We’ve had an astonishing amount of donations and support from a huge amount of people over the last 24 hours or so.

“As a result of everyone’s incredible efforts and two unbelievably generous donations, the total has been reached.

“On behalf of Liam and his family and friends, I’d like to thank everyone who has shown so much love and support. I think we can safely say that good triumphs bad!”

Avon and Somerset Police are hunting the thugs who wrecked the scooter.

A spokesperson said: “We are investigating criminal damage to a mobility scooter in Bristol.

“A group of people are reported to have been seen pushing the scooter along the road before returning it in a damaged condition, so that it couldn’t be used by the owner.

“The victim – who has learning and mobility difficulties – travels to and from college on the mobility scooter, transferring to a wheelchair while in college.

“We are keen to hear from anyone who was in Ashley Down Road near to the college yesterday between 9-11am, who may have seen a group of people pushing a mobility scooter into parked cars.”

“My Daddy Is Hurting My Mummy”: Brave Mum Speaks Out About How Her Six-Year-Old “Saved Her Life”