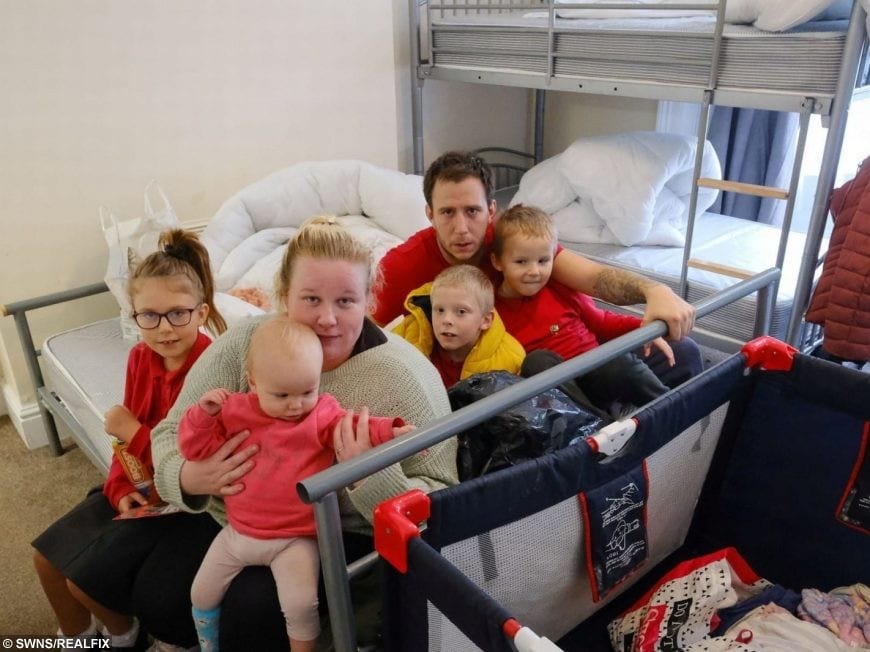 A family of six with a disabled child are “stuck in a nightmare” living in one room in a shared house – as two councils 170 miles apart say it is not their duty to house them.

Craig Simmonds and Roxanne Stamford have been left in “limbo” with their four children, all aged under eight, as they have been relocated between Bristol and Cornwall three times in the last six months.

The situation has seen the family housed in a caravan in Cornwall, moved around hotels and temporary accommodation, and now “dumped” in a “filthy” single room in a house share in Southville, Bristol.

Bristol City Council have been told the room is “totally unacceptable” for the family, with “mould and damp” on the walls, “bloodstains” on the bedding, and mice droppings in the corner.

The family have a young baby and a disabled child with cerebral palsy, and Roxanne is expecting her fifth child – but her midwife is still down in Cornwall, as they do not have a permanent address in Bristol.

And as the family struggle with their temporary living conditions, both Bristol City Council and Cornwall Council say it is not their responsibility to find them a permanent home.

Desperate Craig, who is concerned for the welfare of his children, said: “I’m just trying to do the best I can to support my family.”

The family’s ordeal began on April 30 this year – the day before they were due to be evicted by Cornwall Council from their home in Camborne.

Craig worked as a chef in the town, but increasingly had to take time off work to support Roxanne, after she struggled with severe post-natal depression after having baby Aimee last year.

He soon lost his job and the couple fell into rent arrears, eventually being served with an eviction notice for May 1.

Roxanne said: “I didn’t want the kids to see the bailiffs actually come and chuck us out, I couldn’t bear that to happen.

“So I left the keys with a neighbour and we left the day before, on April 30, before the bailiffs came.”

The family packed up their car and drove 180 miles up the M5 to stay with Craig’s mum, Lou Simmonds, in her flat in Bristol – where Craig lived for the first nine years of his life.

Bristol-born Craig, with his four children Catelynn, Freddie, Harry, and Aimee in tow, was immediately helped by Bristol City Council with accommodation.

The couple were put into a three-bed house, albeit temporarily, in Bedminster.

The three older children were enrolled into their local primary school, Parson Street School, and as a skilled chef, Craig got a job quickly at a local pub.

“Everything was sorted, or seemed to be,” said Craig.

“The school was amazing, the kids settled in really well, they loved going to school, and I got a job. The house was nice, and I thought we would be ok.”

But behind the scenes, it appears a conflict was brewing between Bristol City Council and Cornwall Council.

As the family went through the process of applying for more permanent housing, Bristol City Council told them there was a problem.

Craig’s ‘local links’ didn’t meet the criteria. He hadn’t been an adult in Bristol, and his family hadn’t lived in Bristol for more than six months.

His family link to his mum didn’t count either – any family member has to have lived in Bristol for five years for that to count, and Lou only moved back to the city three years ago.

As the summer began, the family were told they would have to go back to Cornwall, and present themselves as homeless there, not in Bristol.

On Harry’s sixth birthday, the children were taken out of Parson Street School and driven back down the M5 to be put into a single room in a shared house in Newquay.

“It was awful. At 4am there were people drunk or on drugs, banging on the door, shouting they were going to kill us. The children were terrified,” said Craig.

Cornwall Council kept moving them around places like that, including for a spell, into a caravan.

By mid-August, the new school year was looming and Roxanne was desperate to provide some stability for her children.

Craig added: “Trying to get the kids into school was an absolute nightmare.

“Cornwall Council told us they would have to go to school, but allocated the three of them three different schools, which was just impossible.

Then, Craig said Cornwall Council told them their efforts to find them a home had failed, and hit them with another bombshell.

Roxanne added: “They told us we had made ourselves intentionally homeless, because we left the day before the bailiffs came.

“They told us that there was nothing more they could do, and we would have to find our own privately rented accommodation, and pay for it with our housing benefit.

“I spent weeks searching for somewhere to live. It was impossible. We didn’t have a guarantor.

“There is absolutely nowhere in Cornwall that will take a family of six on benefits in private rented accommodation.”

On October 11, Cornwall Council’s temporary accommodation ended, and the family were out on the streets again – and bundled back up the M5 to Bristol.

They spent three nights staying on blow-up beds at Lou’s retirement flat in Stockwood, Bristol, before being told they could not stay there permanently.

The family then spent the night of October 14 staying at homeless charity Shelter, and the next three nights at an Air Bnb near St Nick’s Market – paid for by a housing officer.

Now, finding them a place to live appears to have been handed over to emergency housing agency Connolly & Callaghan, which runs a huge number of temporary accommodation units in Bristol.

C&C initially told them to go to a two-bed flat in Fishponds, but then told them it was flooded.

Luckily, the children were welcomed back to Parson Street Primary School, and the family were sent to a room in an HMO in nearby Southville.

Roxanne said: “We arrived and the front door was open, the door to the room was open and we were told this was it.

“The state of the little bathroom was worse – one of my kids looked at it and refused to go in it – we go to Asda when he needs the loo.”

They claim that the man from C&C did not even give them a key to the front door, so the family spent their first night there unable to go out, as they would not have been able to get back in.

The plight of what is happening to the family has shocked education and health professionals in the city.

Craig says they have received “incredible” support from Parson Street Primary School, who have written a damning letter to council and housing chiefs urging them to end their ordeal.

Freddie, particularly, needed more help – he has a range of special needs, including cerebral palsy, and has to have his legs rubbed vigorously after any exercise.

Craig said: “The school have been amazing. It’s the only stable thing going on for the children.

“They love going to school there, and they’ve been great. We’re desperate to keep them in that school.”

A letter written by the school support workers reads: “The condition of the room is totally unacceptable for anyone to live in.

“Mould and damp all over the walls, bathroom, shower filthy, fridge with no shelves in, bloodstains on the bedding, rat or mice droppings in the corner and no lock on the door.

“The effect this is having on the family is truly telling.

“Mum is struggling to maintain stability with her mental health, dad is unable to take the job he has set up for himself, and he feels that he is letting his family down and is extremely emotional about this.

“The three children are scared of the new room due to the awful conditions,” she wrote, adding that the children all fell asleep in school that day.

“We are extremely concerned for the welfare of this family. They need a secure base in the Bedminster area so they can begin to build a new life for themselves.”

Now, after two weeks in Southville, the family are in limbo, with neither Bristol City Council nor Cornwall Council acknowledging they have a responsibility to house the family.

Grandmother Lou said: “Cornwall are taking advantage of the fact Craig and Rox want to be in Bristol.

“They’ve washed their hands of them. And Bristol seem to be trying to find everything they can to not take them in.

“It’s absolutely gut-wrenching for me. Obviously I would have them at mine if I could, but I can’t. I’m not allowed.

“It’s heartbreaking for me to have to send them to the council and not take them in myself. I’ve done all I can. I feel terrible I can’t do more.”

The family have applied to be accepted onto the waiting list in Bristol.

Bristol is a city still in the grips of a housing crisis, despite new homes being built in their hundreds.

There are 12,000 people on the housing waiting list, and 500 families in temporary accommodation.