Finally little Issac can go for a walk with his mummy!

by RealFix
in Cute, Health
0

A toddler born with a mystery condition that left him unable to walk has been given a lifeline – a special harness which enables him to toddle on his mother’s TOES.

Issac Ketley was born four weeks early but has baffled doctors with his slow development and his parents have been told he may never walk unaided.

But now a local charity has stepped in and donated an ‘Upsee’ harness, which enables the 16-month-old to ‘walk’ on mum Francesca’s feet while she supports his body weight.

Now Issac has his first pair of ‘proper’ shoes and his mum has hailed the device as “amazing”.

Francesca, 21, said: “At first he was wary of his new ‘toy’ but now he loves it. It’s great to see him walk with his big brother – they’ve got such a great bond.

“We have walked to our shop, we have been to see my gran and we’ve even been on a bus.

“I had tears in my eyes watching him. It’s amazing.”

Francesca, of Hull, East Yorks., began to notice developmental problems with Isaac after just a few months and took him to be tested.

She said: “Issac is a bubbly, happy baby and started to smile when he was a month old, but when it came to the bigger milestones, like sitting up at six months, he was showing no signs at all.”

“He was so floppy and was struggling to sit up and crawl. I tried to tell the health visitor but she kept telling me to wait a few months as he was an early baby and could just be behind.

“I waited and waited but there were still no signs of Issac sitting up or crawling.”

At ten-months it was confirmed that Isaac was not developing properly – but despite blood tests and an MRI scan there has been no definitive diagnosis.

Francesca said: “He’s had blood tests from every month from when he was 13 months old to try to find out what’s wrong with him and so far the doctors have only been able to say that he has global developmental delay which is a very vague diagnosis.

“Almost every doctor he has seen has said something different and I have been told that Issac may never walk. I’m not going to focus on that though – he might walk or he might not and we’ll do the best we can with whatever happens.”

Issac’s Upsee harness works in a special way that allows Francesca and her son to walk step-by-step together.

She wears a belt with two straps that attach to a harness fitted to Issac.

The pair then put their feet in two sandals attached to each other and, with Issac between her legs, mum takes steps for the both of them.

Using the Upsee, Issac is now up on his feet with his mum and walks hand-in-hand with his older brother Declan, 5.

She said: “It really helps to build up the muscles in his legs and get them to start to understand what they need to do.

“It takes forever to get anywhere though and it feels like you’re wearing massive space boots!”

Francesca has set up a support group for parents in her position with physically-challenged children, which has a Facebook group called ‘Parents With A Special Star’.

Within a month, the group had 150 members which has helped her deal with Issac’s developmental problems.

She said: “People need someone to rant at or talk to or laugh with to help them get through difficulties like this. It has stopped me feeling alone and has helped me realise that there are other people out there struggling with the same things.”

It is through her group that David Freer from the charity ‘Nice 2 b Nice’ got in touch and offered to buy the Upsee.

“When they came round to see me with the actual kit, I just could not believe it,” said Francesca. “I don’t think I will ever be able to thank them enough.”

Taxi driver David said: “The main aim is to put smiles on kids faces. We just want to carry on with what we’re doing and do as much as we can for as many families as we can.” 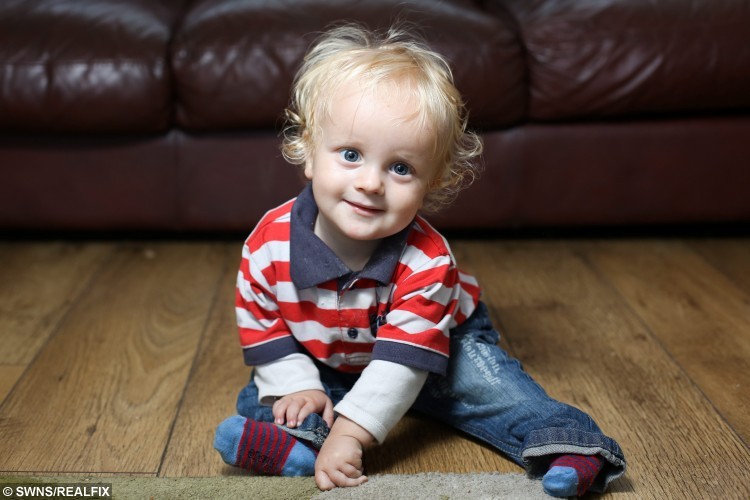 Grim or Gross? Tattoos removed from dead relatives and FRAMED as keepsakes

Horror crazy golf injury that EVERY parent needs to see

Horror crazy golf injury that EVERY parent needs to see