An eight-year-old boy with a rare muscle disease is fighting back with a super-sized high-calorie diet – including SUSHI for breakfast.

Little Tommy Coleman has Duchenne muscular dystrophy which causes his muscles to weaken and waste, as well as a heart condition which means he burns up lots of energy.

The brave lad is the same size as any boy his age but eats more than a man a day – an estimated 3,000 calories – including FOUR meals and two puddings.

And while most kids are tucking into a bowl of cereal, foodie Tommy kick-starts every day with a full plate of his favourite high-fat food sushi, to keep his tiredness at bay.

Mum Louise, 37, from Bradley Stoke, Bristol, said thanks to the high energy diet – and his daily tablets – he is happy and full of energy.

The married accountant said: “It just makes all the difference. He’s happy and it just keeps him putting on weight like he should be.

“When he was in hospital he was really struggling to put on weight and he just wasn’t keen on those protein shakes or hospital food.

“But he’s a big fan of adult foods – he’s got very good taste – and sushi is his favourite food.”

“It just sets him up for the day. People are always surprised how much he can put away. He definitely has a big appetite and we have to squeeze in calories when we can.

“He often has an extra meal just before bed and takes a plate up with him because he loves his reading, so he snacks while he reads.”

When Tommy was a toddler his mum Louise, and dad Steve, 39, noticed he was unsteady on his feet, but put it down to him inheriting their lack of sports skills.

But when he started school his teachers noticed he had a problem with some motor skills, and gave him exercises.

However when he was six-year-old he started to become very tired and poorly, and after a number of visits to the doctors he was admitted to intensive care.

He was diagnosed with cardiomyopathy – disease of the heart muscle – and Duchenne muscular dystrophy.

It means his muscles become weak and also his heart is enlarged and works extra-hard, so uses up enormous amounts of energy.

It is thought the two conditions are connected.

After a three-month stay at Bristol Children’s hospital fighting for his life, he was finally allowed to go home, with instructions to bulk up and eat lots of food.

Two years later the little lad sometimes uses his wheelchair to get around, but thanks to his super-sized diet he has enough energy to play with his friends and go to school.

He puts away an estimated 3,000 calories-a-day, and as well as his fishy breakfast, he loves a full cooked school lunch with pudding at school.

Food-loving Tommy also enjoys nothing more than a 10oz steak for dinner – with chips and of course pudding – and will then have another meal for supper, as well as snacks.

“It’s tempting to sit down and eat it all with him, but of course we can’t.

“I do have to spend a lot of time stocking the fridge up!”

As a special treat, the charity organised a day out to Yo Sushi in Soho, London, where the schoolboy had a master class with an expert.

“The day out was such a lovely surprise for Tommy,” Louise added.

Breakfast – A plate of sushi with some smoked salmon. Sometimes cold meats and sausage rolls.

Dinner – Steak and chips or chicken and pasta. Three course meal if he is eating out, including mussels for starter. Pudding.

Supper – Another plate of dinner, or meats, pork pies and sausage rolls. 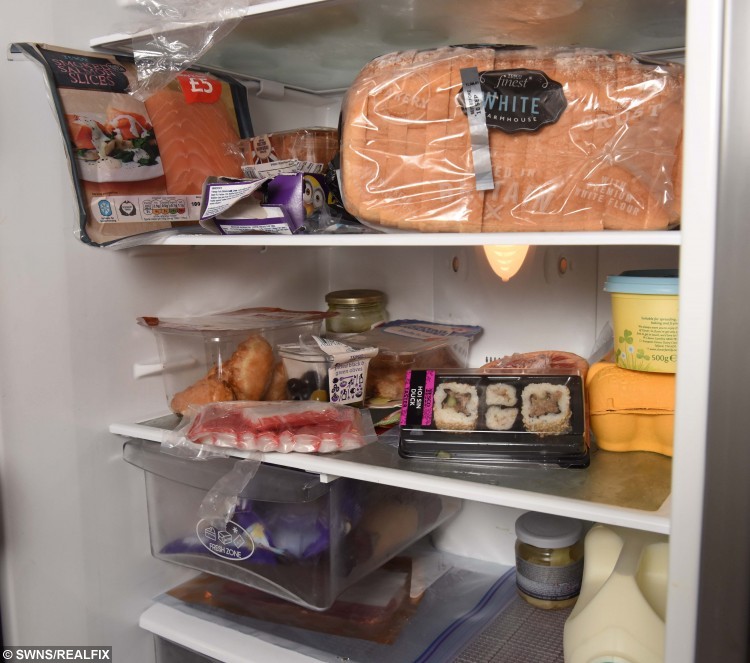 Meet Thumbelina! The rare tiny hedgehog that will never grow any bigger

Meet Thumbelina! The rare tiny hedgehog that will never grow any bigger