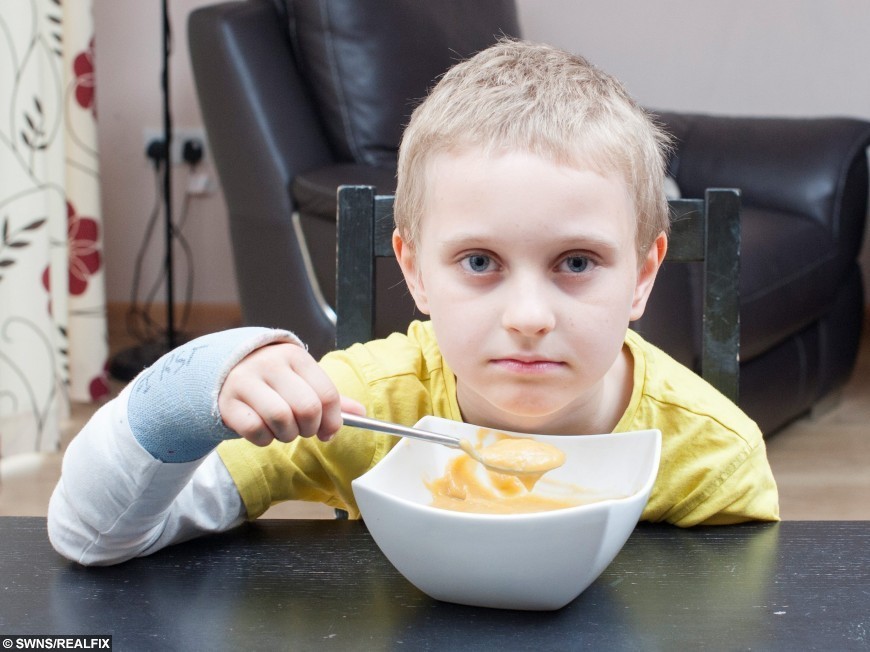 A “skeletal” schoolboy with a rare phobia of choking is so afraid of solid food he can only eat Weetabix and SOUP. 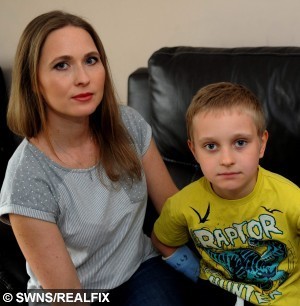 Mum Oxana is worried about her son’s future

Ocean Russell, seven, started rejecting solids when he was four-years-old after his tonsils became swollen, giving him problems eating and sleeping.

But his anxiety became so severe he is now only able to eat soft mushed up cereal, soup, liquidised baked beans and mashed potato – and only under the supervision of his mum.

The little lad hasn’t gained any weight in the last two years and refuses to eat at school, leaving his desperate mum Oxana, 36, worried about his future.

Married Oxana, from Severn Beach, Bristol, said: “It makes life so hard. If I try to feed him anything other than soup he cries and panics.

“He is scared of choking. I liquidise vegetables to get enough nutrients into him, but I worry about what problems this will develop into in the future.

“He won’t even eat a banana.

“Before this happened, he ate everything. He was a normal, chubby toddler.”

“Now he needs constant reassurance at every meal, and it takes hours to feed him.

“He doesn’t eat a thing at school, and his teachers are very worried about him.”

Ocean used to enjoy trying new food until he caught a cold in in May 2012, causing his tonsils to become inflamed and swollen for two years. 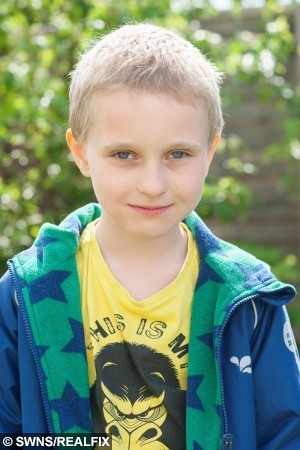 Despite treatment, he became less and less able to eat and sleep, and he was diagnosed with sleep apnoea in September last year.

He had his tonsils removed at the Bristol Children’s Hospital and despite his throat returning to normal, he remained terrified of choking on solid food.

For the last three years, the youngster has been getting by on just a handful of soft foods which can be easily swallowed, and refuses to try anything else.

Ocean has grown like any normal boy, but has remained 23kg for the last two years, and can’t take part in any after-school activities because he has to get home to eat.

Oxana, who thinks her son has a psychological issue with food, said: “I am so worried about Ocean’s weight. He looks like a skeleton and he hasn’t put on any weight in the last two years, despite growing.

“This needs to get sorted out as soon as possible, because the longer it gets left, the worse the psychological problem will get.

“He wants to eat and is always talking about how he wishes he could eat, and I will say that he can, but he says he is too scared.

“He gets upset because he looks at what we are eating and wishes he had it as well.”

Ocean was seen by his GP in March, and was referred to specialists who said he needed to see a paediatrician as soon as possible.

Full-time mum Oxana and dad John, 42, an aircraft engineer, claim they were told his case was not urgent enough and he will not be seen by experts until August. 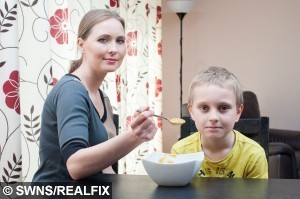 Oxana has tried everything to get Ocean to eat

“This has been going on for three years, and every time we have had to wait up to three months to see someone or get a referral,” said Oxana.

“Our local GP in Pilning has been great and said we needed an urgent referral so Ocean can see a mental health specialist, but the community paediatrician didn’t give us one.”

A spokeswoman for North Bristol NHS Trust said: “Ocean has not yet been seen by the community paediatrician, but has been invited for an appointment.

“Until this has happened a decision cannot be made as to whether it is appropriate for him to be referred to another team for further support.

“We acknowledge that the family has had to wait longer than we would like to see a paediatrician and we apologise for that.

“We would urge the family to get in touch with the Trust to discuss any concerns they have.”

LUNCH – Two or three sips of a liquid Weetabix drink.

DINNER – Soup and a bit of hummus.