First Child To Have Double Hand Transplant Now Able To Write, Feed And Dress Himself

Zion Harvey one year after the op.

The first child to undergo a double hand transplant was able to write, feed and dress himself just a year after the pioneering surgery.

American boy Zion Harvey lost his hands and his feet when he was just two-years-old to a life-threatening sepsis infection that also led to a kidney transplant.

Because he was already taking immunosuppressant drugs to stop his body from rejecting the kidney, doctors said he was a perfect candidate for another type of transplant.

He underwent the 10 hour hand transplant surgery when he was eight in 2015 and within a year he was able to write, and feed and dress himself independently following months of occupational therapy and psychological support.

But a study, published in The Lancet Child and Adolescent Health journal, revealed that in the 18 months since the surgery Zion has faced setbacks, including treatment of numerous rejections of the hands and extensive rehab to help him learn to use his hands.

Dr Sandra Amaral, of the Children’s Hospital of Philadelphia where Zion had the op, said: “Our study shows that hand transplant surgery is possible when carefully managed and supported by a team of surgeons, transplant specialists, occupational therapists, rehabilitation teams, social workers and psychologists.

“Eighteen months after the surgery, the child is more independent and able to complete day-to-day activities.

“He continues to improve as he undergoes daily therapy to increase his hand function, and psycho-social support to help deal with the ongoing demands of his surgery.”

Previously, this type of transplant had been used for single limbs between identical twins and in adults.

In another case involving a teenager who received a donor limb, there were severe complications and the patient died soon after surgery.

Before the double hand transplant, he had limited ability to dress, feed and wash himself through adapted processes, using his residual limbs or specialist equipment. 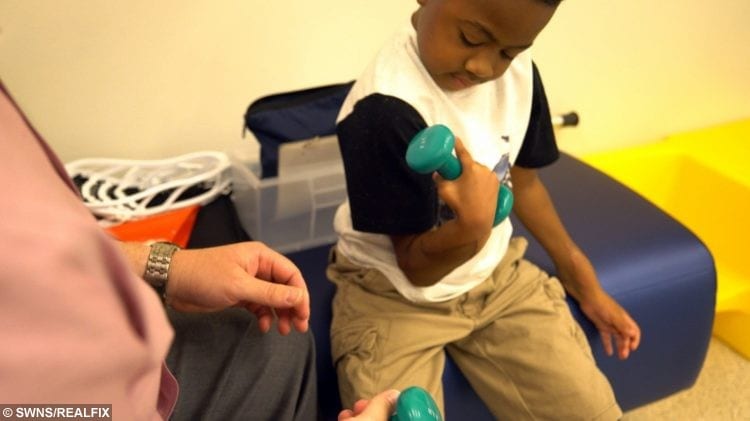 His mother’s hopes for the surgery were for him to be able to dress, brush his teeth, and cut food independently, and the boy wanted to be able to climb monkey bars and grip a baseball bat.

The surgery took place when the hands became available from a deceased patient, and involved four medical teams working simultaneously on the donor hands and the child.

Six days after the transplant, Zion began daily occupational therapy, including video games and exercises using finger lights and puppets, as well as daily tasks such as writing and using a knife and fork.

He and his mother also met regularly with a psychologist and a social worker to help him cope with the transplant, and plan for his re-integration at school.

Within days of the surgery, he was able to move his fingers using the ligaments from his residual limbs.

Regrowth of the nerves meant that he could move the transplanted hand muscles and feel touch within around six months, when he also became able to feed himself and grasp a pen to write.

By eight months, he could use scissors and crayons, and within a year of the surgery, he could swing a baseball bat using both hands.

Functional brain imaging has revealed that Zion’s brain has developed pathways for control of hand movement, and for carrying touch sensation signals from the hand back to the brain.

But since his surgery he has undergone eight rejections of the hands, including serious episodes during the fourth and seventh months of his transplant.

All of these were reversed with immunosuppression drugs without impacting the function of his hands.

He remains on four immunosuppression drugs, including a steroid which can impact growth and bone health. 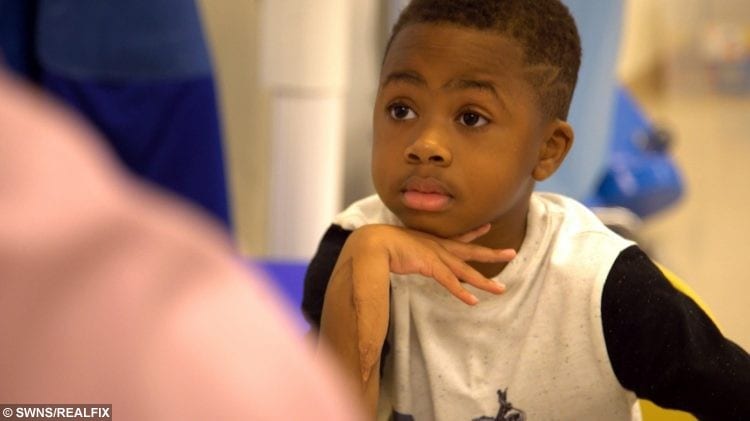 Doctors plan to reduce the use of the boy’s immunosuppression drugs when possible.

They said he has faced some minor infections and some impairment to his transplanted kidney as a result of the increased immunosuppression.

While his function now surpasses what he was able to do before his transplant, he also faced a six-month period of reduced abilities immediately after the surgery. 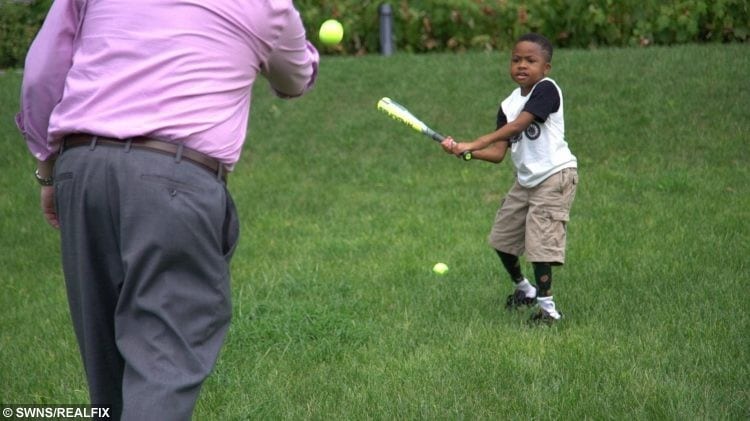 Dr Amaral said: “While functional outcomes are positive and the boy is benefitting from his transplant, this surgery has been very demanding for this child and his family.”

Lead surgeon Dr. Scott Levin added: “We believe that this hallmark vascularised composite allotransplantation case is repeating the evolution of solid organ transplant – moving this type of transplant from adults to children.”