A first time mum discovered she was having twins during a 47-hour labour — when doctors spotted a second head.

Nicole, 31, and Matthew Ziesemer, 34, had only just been introduced to daughter Blakeley when doctors realised she was still in labour.

They spotted “another head” as they went to stitch her up post-birth, and baby Cade was born 59 minutes later.

The couple had a ‘natural pregnancy’, and only had one scan – the day she went into labour – but it’s thought Cabe was “hiding” behind his sister, so wasn’t spotted. 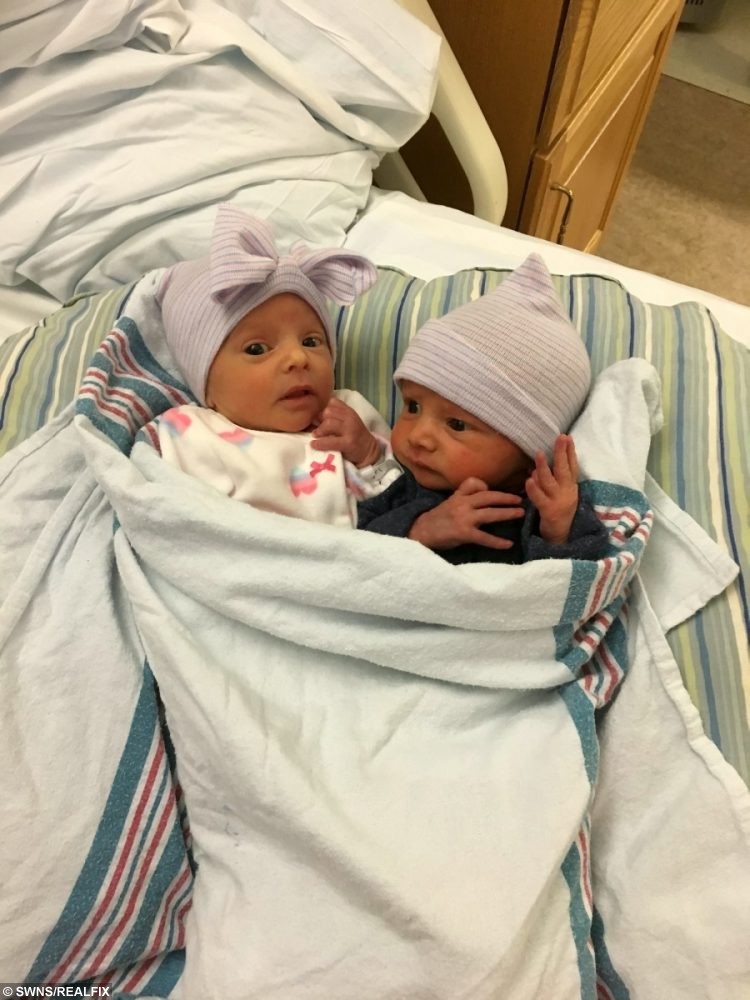 Nicole, from Grand Haven, Michigan, USA, is now home with her family, and said she now can’t imagine just having one baby.

Nicole, who worked in insurance before becoming a full-time mum, said: “It was crazy. We were over the moon but it utter shock.

“There were really no signs that I was carrying more than one baby, in fact people said how small I was.

“We thought the biggest surprise was going to be the sex of the baby, little did we know!

“It was really scary when they said that something else was inside me.

“And when they told us that it was another baby I literally asked her if she was lying!

“I just couldn’t take it all in and was still in so much pain that it was almost impossible to process.

“But I really can’t imagine having just one baby now. It’s like they were meant to be.

“I love the thought that they’ll always have each other.” 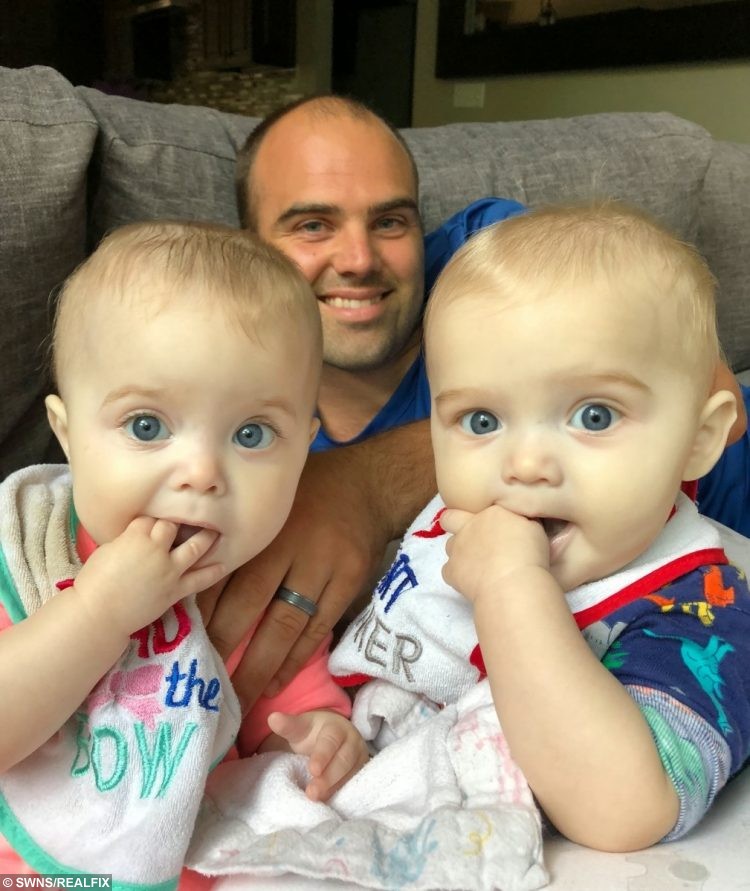 Nicole planned a natural home birth with just a midwife present, but had to go to the nearest hospital – Gerber Memorial, Michigan – when her waters broke at just 36 weeks.

Nicole – who had severe morning sickness throughout the pregnancy – decided to forgo painkillers in favour of breathing exercises, a yoga ball and cool showers.

She didn’t have any scans throughout her pregnancy, apart from one on the day we went into labour.

After being in labour for over 45 hours the expectant mum opted for an epidural and a suction, and after another two hours Blakeley arrived, at 10.06pm on December 30 weighing 4lbs 4oz.

But doctors grew worried as instead to the pain subsiding, Nicole was still in agony after the delivery.

They were due to stitch Nicole’s vagina up, but realised that something else was in there, she said.

While medics were trying to retrieve her placenta, it became clear something wasn’t quite right, and decided to do an emergency ultrasound.

Baby Cade, who was having difficulty breathing on his own, so was rushed straight off to nearby Spectrum Hospital, in Grand Rapids, Michigan, USA. 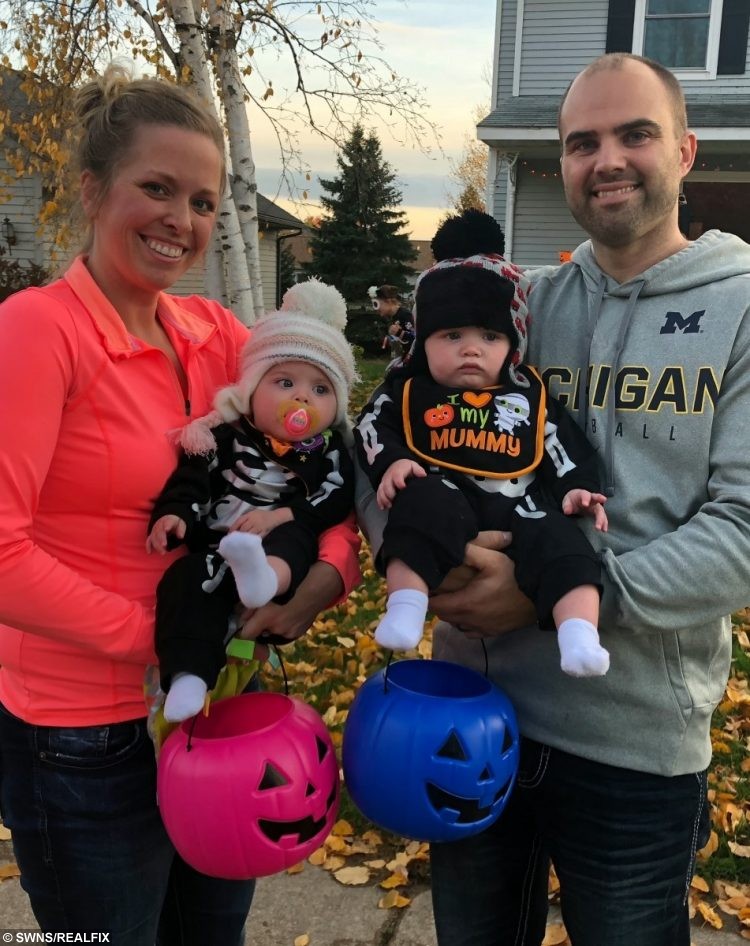 Nicole, who stayed with her daughter, said: “Over the next few days my husband was primarily with Cade while my daughter and I stayed in for observations.

“We were still reeling from the shock and just trying to get our heads around it all.

“But primarily all we wanted was for them both to be strong and healthy.

“The craziest thing is that on the day I went into labour I did have a scan but it only picked up the one baby.

“They think that Cade must have been hiding right behind his sister.”

When allowed home, the couple, who met online in 2012, went shopping for duplicates of all the baby equipment that they’d previously purchased for just one.

Matt, a chiropractor, and Nicole have since been told that twins and triplets run in her side of the family. 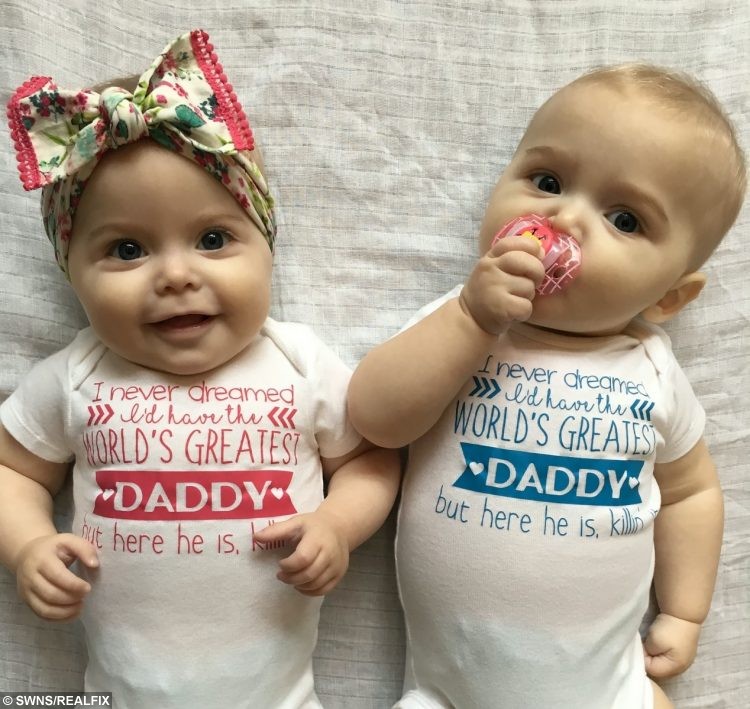 She said: “It was amazing to hear that it’s a bit of a family tradition, my grandma’s cousins apparently had twins and triplets.

“People do ask us if we were to have another baby ‘would we have scans this time?’ but I honestly don’t think we would.

“Unless there were any clear medical red flags, I’d do it just the same all over again.”

Matt added: “‘It was truly was just such a surreal moment. I could not believe that my wife was carrying two children that entire time.

”My wife does an amazing job with the two of them. I really don’t know how she does it all day every day.”