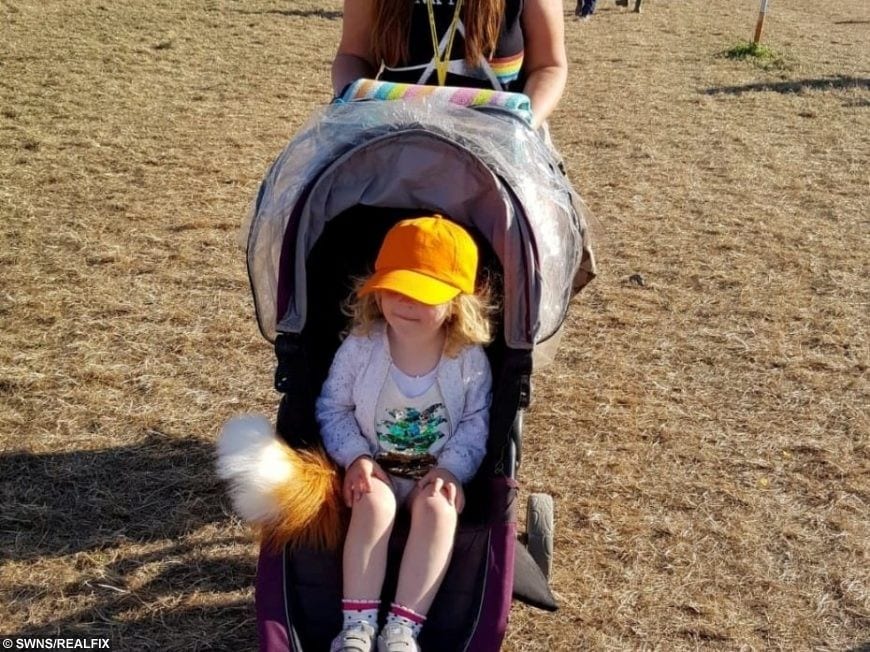 A five-year-old unable to go to Glastonbury because she has leukaemia has been sent hundreds of get well cards by festival goers – after an appeal at Worthy Farm.

Bede Gordon and mum Saskia hoped to make the journey to Pilton but couldn’t because she is undergoing intensive chemotherapy.

She turned five during the festival – on June 28 – and received hundreds of postcards, photographs and gifts from well-wishers hoping to brighten up her day.

TV entertainers including Dynamo and Basil Brush also appeared in a video at Glastonbury Festival expressing their love.

Saskia said: “It’s been amazing knowing we were there in the hearts of so many people.

“These people save a lot of money to go to Glastonbury, for many this is their only holiday, yet they have taken time out to do such a special thing for complete strangers.

“I’ve lost count of the amount of messages with well-wishes and photographs, we were event sent a teepee – it’s unbelievable.”

Saskia said they considered making the trip but Glastonbury is just too far from the hospital and Bede needs weekly chemotherapy sessions.

“It would have meant taking wipes, gloves, syringes and meds with us and I don’t think we’d have been able to carry it all in,” she added.

“She is doing really well at the moment, she’s gone through all the intensive treatment.
“But if her temperature rises we have to go straight to the hospital, so we can never travel too far away.”

Bede has been a fan of Glastonbury Festival since she first attended in 2017.

Saskia added: “She was just so at home when she was there.

“She’s autistic as well so big places and crowds are not her thing, but this was something else.

“She still talks about it a lot, even though it was two years ago now.”

Saskia said Bede was “amazed” by the messages and gifts she received.

“She pointed to the Pyramid Stage on one of the postcards and said, ‘I’m going to go there’,” Saskia said.

Saskia, of Durham, originally asked members of the Glasto Chat Facebook group to send Bede a postcard from the festival.

But she never expected the response they received.

She said: “I got up one morning and it was raining and I said ‘look at the rain, Bede’ and she said to me, ‘we were meant to be at Glastonbury’.

“I hadn’t even told her the festival was on – it just struck me – and that’s what gave me the idea to post on the Facebook group.

“I just thought it would be lovely to stand a few postcards up alongside her birthday cards – but more than 200 has completely blown us away.”

On Bede’s birthday, a birthday message with her picture was displayed on the big screen at the John Peel stage and Bede has even been invited backstage next year if she attends.

A video was also sent from a huge group meet-up at the festival, where happy birthday was sang for her, amid cheers.

On the Facebook Group, Saskia wrote: “I honestly don’t know what to say. From the bottom of our hearts thank you for bringing all of the Glasto magic to our baby girl.

“(I) Hope you all had the most amazing time and have memories to treasure forever.
“We can’t wait to see you all in the fields next year.”

Saskia said she is still receiving messages from strangers to tell her to expect more gifts, including a scrapbook, in the post.