Charley Shepherd, 5, who is hoping to buy wigs after losing her hair through alopecia. See Ross Parry copy RPYHAIR: A brave Harrogate youngster who is losing her hair through alopecia is hoping to purchase new wigs so she can look like her favourite Disney princesses. Charley Shepherd, 5, began to lose patches of her hair in May through stress as her mother underwent frequent operations to battle a womb disease. By October, three-quarters of her hair had fallen out and, after a series of negative blood tests, doctors at Harrogate hospital confirmed she was suffering with alopecia. Despite the devastating news that all her hair may eventually fall out, Charley reacted bravely and immediately began planning how to cover up the condition. CharleyÃs mother, Helen Oliver, has now started a fundraising page for her daughter to help raise money needed to buy the necessary wigs to help her look like Ãa Disney princessÃ.

A five-year-old girl who is losing her hair is appealing for help to buy a new set of wigs – so she can look like her favourite Disney princesses.

Charley Shepherd, who was diagnosed with stress-related alopecia in October, wants to fashion herself a new fairytale look – and she needs a set of wigs to accompany her Cinderella, Elsa, Belle and Tinkerbelle costumes.

Charley began to lose patches of her hair in May, while her mum Helen was battling womb disease Adenomyosis, where tissue that normally lines the womb begins growing within the muscular wall.

Helen had to undergo three operations between January and April, including one to remove her womb, meaning she was in an out of hospital and unable to look after Charley full-time.

Helen said: “It was difficult for her as I always looked after her at home while her dad went to work.

“But she had to be looked after at friend’s houses and it was a lot to take in.

“At the time we didn’t know she was stressed and if it wasn’t for the hair loss we wouldn’t have known.”

By October Charley had lost three-quarters of her hair and after a series of blood tests to find out the cause of the hair loss, doctors confirmed she had alopecia.

Helen, of Harrogate, North Yorks., said: “I started to notice the problem in May. I was combing her hair and found a bald patch on her head as a 50 pence piece and it doubled after a week.

“The doctor said she should undergo treatment for three months before we took her to the hospital but by the time we did half of her hair had gone.

“There was no underlying cause found and she was diagnosed with alopecia. The doctors have told us that children who develop it have less chance of it growing back.”

“The first thing she said after I told her there was a chance that she could lose it all was ‘can I have lots of wigs so I can look like a Disney princess’.

“She is coping with it as well as can be expected. It is us parents who are not coping well.” 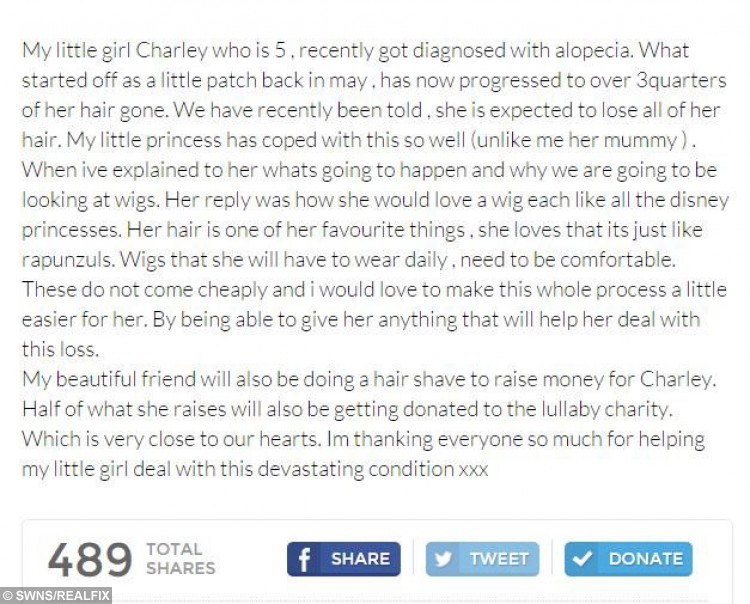 Helen said it has been difficult for Charley to come to terms with losing all her hair, and she has been particularly worried about how her classmates at school will react.

She said: “She was so nervous and upset at the thought of going back to school.

“She was asking if all the kids would laugh at her and start pulling her wig. It really is heart- breaking.

“But the school have been really good about it all, they have spoken to the children because they will obviously ask questions about it all.

“Its more the adult reaction that has concerned us. A lot of people on the street will talk about her quite loudly and stop and stare but thankfully it’s just me that’s noticed.

“All we can do is reassure her that it’s going to be ok.”

Helen has set up a gofundme page to raise the money needed to buy the wigs, which typically last only between six months and a year.

Because of the lack of children’s wigs on the market Helen and partner Brett Shepherd, who is Charley’s dad, will be forced to spend more than £1,000 on a custom made hairpiece for their daughter.

“The only wigs we have found so far look nothing like Charley – she has long dark hair and the hairpieces we seen are short and blonde.

“She’s got long hair and she still wants Rapunzel-length hair.

“We are just hoping to get her one before all her hair falls out.” 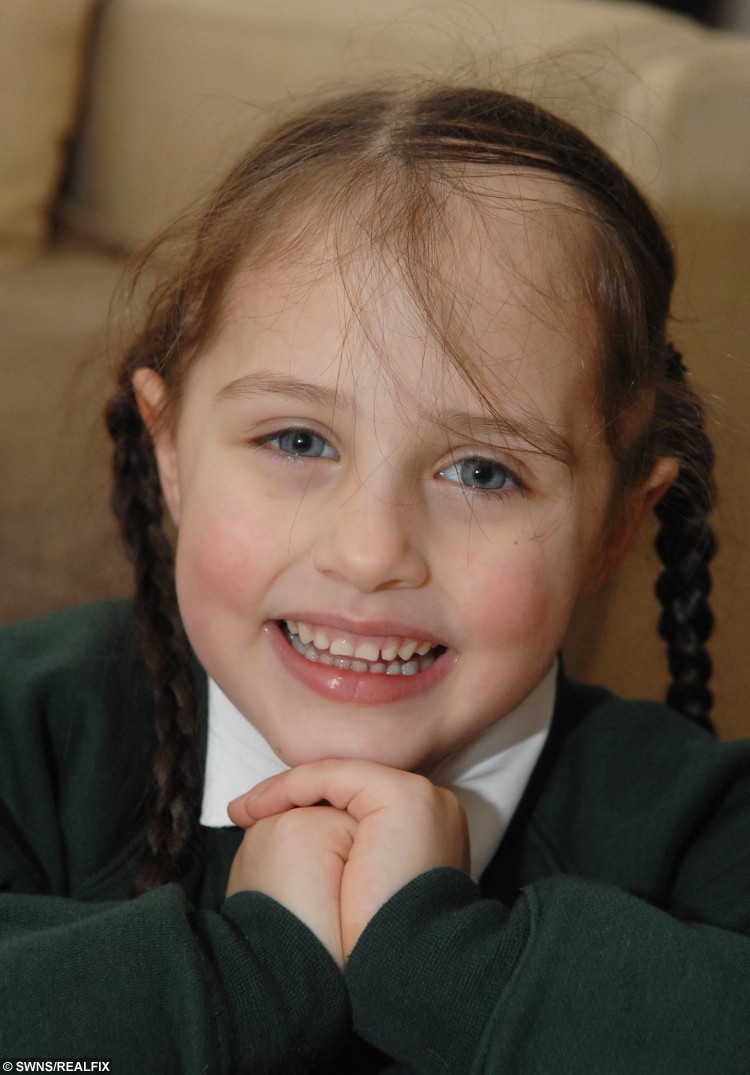 Helen, who is also mum to Jasmine, 13, and Jordan, 16, said doctors still don’t know if her condition will improve and Charley will ever improve.

She said: “The more you lose the less chance it has of growing back and as Charley has lost almost all her hair I think it is definitely a long term.

Helen said Charley is too young to undergo other treatments such as steroid injections and laser treatment.

The fundraising page has already raised more than £900, beating Helen’s initial target of £500, mainly thanks to the help of her friend Emily Mitchem-Lines who had planned to cut off all her hair to help boost the fund’s coffers.

Helen said: “Emily asked Charley what colour she would like her to die it before she cut it off and Charley said she wanted her to have rainbow-coloured hair, so Emily dyed it those colours.

“But when she came to cut it off Charley had changed her mind, so we’ve asked Emily to leave it for the time being.”

Donations to help fund Charley’s wigs can be made at gofundme.com/fpa9zng4