Five years in agony and scarred for life to be 3 1/2 inches taller – was it worth it?

Sanika Hussain, 25, pictured outside her home in Bradford, West Yorkshire. See SWNS story SWDWARF; A dwarf does not feel short-changed after spending five years of her life in agony undergoing a painful procedure Ã that made her three-and-a-half inches TALLER. Sanika Hussain endured almost 60 months of pain and suffering in a bid to reach her dream Ã of being taller than FOUR FOOT SIX. The 25-year-old, who stopped growing at just under 4ft 5ins, is now proudly standing tall at a lofty 4ft 8.5ins Ã despite leaving her legs horrendously scarred. Sanika, from Bradford, W. Yorks, endured years of horrific taunts such as ÃfreakÃ and Ãmini-meÃ after being born with dwarfism, before finally being given the go ahead for controversial leg-lengthening procedures in 2010. The painful process, which took more than four years, has left Sanika with dozens of scars on her legs Ã and a huge smile on her face. She said: ÃI finally feel comfortable in my own skin.

A dwarf bullied and called ‘Mini Me’ because of her size spent five years in agony undergoing a painful procedure – to make her three-and-a-half inches TALLER.

Sanika Hussain, 25, endured almost 60 months of suffering in a bid to reach her dream height.

Sanika, who stopped growing at just under 4ft 5ins, is now proudly standing tall at 4ft 8.5ins – despite leaving her legs badly scarred.

Sanika, from Bradford, West Yorks, endured years of horrific taunts such as “freak” and “mini-me” after being born with dwarfism, before finally being given the go ahead for controversial leg-lengthening procedures in 2010.

The painful process, which took more than four years, has left Sanika with dozens of scars on her legs – and a huge smile on her face.

She said: “I finally feel comfortable in my own skin.

“Although 3.5 inches may not sound like much, for me it was the difference between standing out and fitting in – between hating myself and feeling confident.

“Growing up, bullies used to shout ‘dwarf‘ and ‘freak’ at me and over time I believed them.

Medics had warned Sanika it could take up to 18 months to fully recover but a bone in Sanika’s right leg snapped and she had to go through the same operation again – more than doubling the healing time.

Sanika, who lives with her carer mum Yasmin, 47, spent close to three years flat on her back, before finally starting to learn how to walk again, with support aides.

But now brave Sanika is on top of the moon after finally being able to ditch her walking frame and having her leg braces removed.

Sanika grew up knowing that she was ‘different’, though she was not diagnosed with her specific form of short-limb dwarfism – hypochondroplasia – until she was 19.

She said: “I was clearly shorter than other children my age.

“I would dread going into school because other children would push me around.

“The other children would call me names all the time.

“Other girls in my class were growing taller, while I stuck out like a sore thumb at 4ft 5ins. Everyone would call me ‘mini-me’.

“It tore away my self-esteem. All I wanted was to be developing into a young woman and to have friends and a boyfriend like other girls my age.

“Instead, I felt completely depressed.”

When discussing her options with the consultant at Leeds General Infirmary, Sanika was told she could be eligible for £8,000 leg-lengthening surgery on the NHS, which could add inches to her height.

She said: “He explained my legs would have to be broken and pieces of metal would be inserted into my shins to add the extra inches.

“Apparently, similar surgery is normally used by people who have had their limbs damaged in an accident, like a car crash.

“He warned me it would be extremely painful, but told me it could add an extra three or four inches to my height – I knew I had to do it.”

Nonetheless, it was another 12 months before the operation took place while Sanika underwent blood tests.

In November 2010 she underwent the eight-hour surgery at Leeds General Infirmary where metal rods were inserted into each leg to add the extra inches.

A metal brace was fitted to each leg, and attached with screws to ensure the pins in her legs did not snap.

She was also fitted with a cast and given a walking frame to help her balance, but a year after the op she suffered a crushing setback, when she bent down to let her cat out and her right leg snapped.

Sanika said: “It sent me right back to square one.

“After getting through a year of recovery, it was a real blow to be fitted with a new brace.

“The pain was horrendous, but I was also scared and alone. I was virtually bed bound and barely left my house for a year.”

“While other women in their twenties were out dating and earning a living, I couldn’t even walk without help.”

However, the brave 25-year-old refused to give up her dream, and the brace on her left leg was removed in April 2014.

Sanika had the final support removed this May, but it took a further six weeks until she could walk unaided.

She said: “It felt amazing to be free of the braces. Finally I looked like any other woman.

“Before the surgery I would never have dreamt of speaking to a man – I’d never felt attractive or confident enough to put myself out there. Now, I’m ready to try online dating.

“This is the best thing that has ever happened to me, even if I do still have to be quite careful.”

“But I would do it all again in a heartbeat.

“The last few years have been torture – but it was worth it.

“One day, I may even be able to wear high heels.” 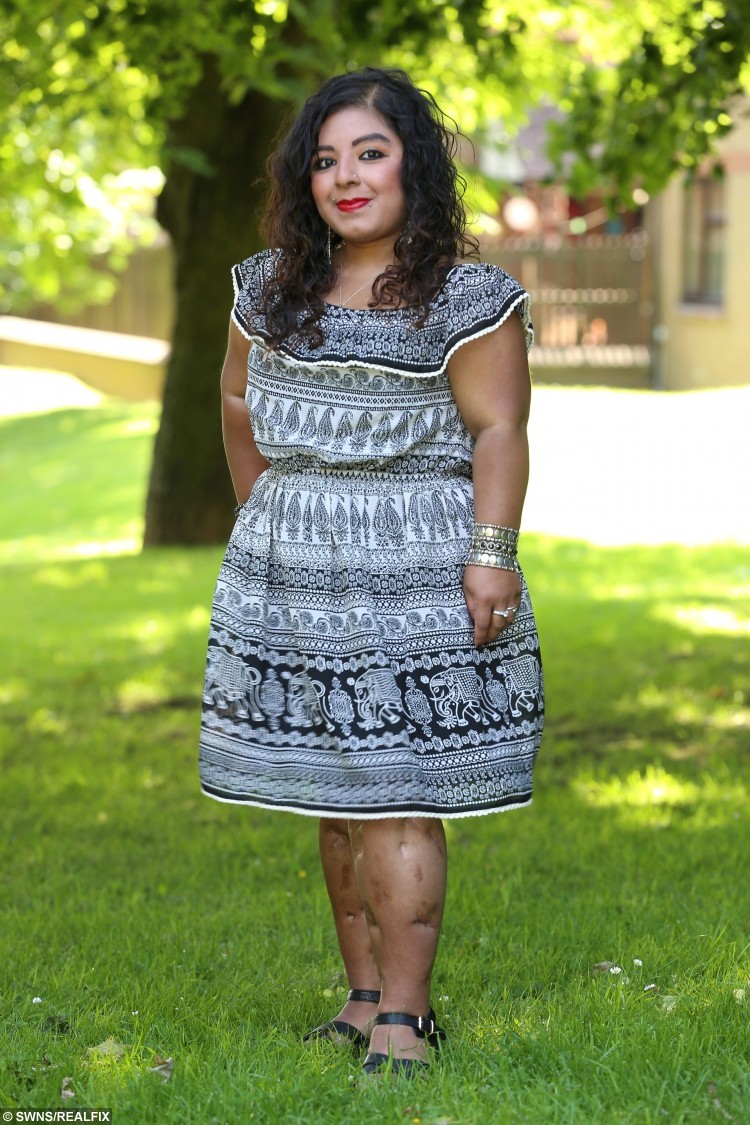 Mother breastfeeds her baby – AND her friend’s son

Mother breastfeeds her baby - AND her friend's son