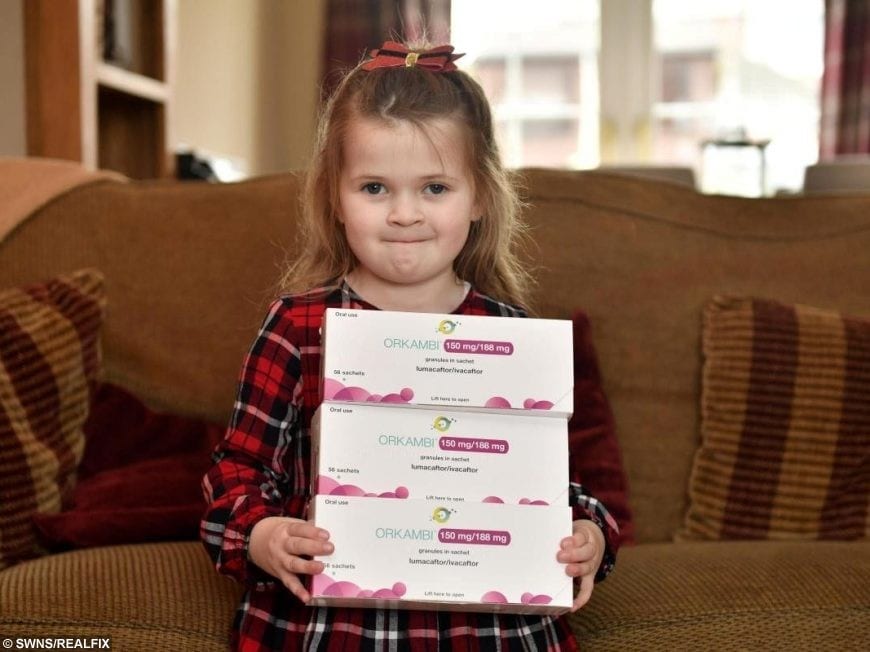 A four-year-old Cystic Fibrosis sufferer received a better Christmas present than she could ever have wished for – after receiving a ‘wonder drug’ for the condition.

Little Ayda Louden’s family spent years campaigning for a vital treatment called Orkambi to be made available on the NHS, before bosses finally gave it the green light in October.

The schoolgirl, who was diagnosed with the debilitating genetic disorder shortly after being born, received her first delivery of the life-extending drug on December 13.

Her elated dad Dave, 35, said: “What better gift for Christmas than the gift of your daughter living a healthier, longer life?

“The delivery driver was greeted by the whole family, honestly I could have hugged him, but went for a handshake instead.”

Orkambi, from Vertex Pharmaceuticals, is said to improve lung function and reduce breathing difficulties – to completely turn CF-sufferers’ lives around.

Before the deal between NHS bosses and Vertex Pharmaceuticals was struck, the American company had wanted to charge patients £100,000 a year for the drug.

Engineer Dave and wife Stacey, 32, who also have an eight-year-old son called Alfie, have spent most of Ayda’s life campaigning for it to be made available on the NHS.

After hearing the good news in October the family, from Carlisle, Cumbria, attended a CF clinic in November to find out about their daughter’s treatment going forward.

Dave said: “It certainly is a day I will never forget.

“To see the excitement of Ayda’s team that they finally had the best tools to fight this horrible condition, the feeling of relief that she was finally going to receive the best possible treatment and be given the best possible chance at life was just an amazing feeling.

Ayda began the twice daily treatment, which involves granules being mixed with soft food or liquid, on December 14.

“Ayda has taken to Orkambi really well and has had no negative side effects so far,” Dave said.

“She has been really brave and mature beyond her years, it’s not a nice tasting medicine, but she’s put that to one side and has taken it every morning and night with minimal complaints.

“She seems to realise its important which is really good, we are so proud of her.”

Dave and Stacey say this is the treatment has arrived just in time, not just because it’s Christmas but because CF-sufferers are at the highest risk of infection over winter.

One of Ayda’s most severe symptoms over the years has been weight loss, however, it’s hoped her new treatment will see that improve.

“All of this will increase her life expectancy by decades and giver her a better quality of life.

“It’s not just Ayda Orkambi has had an effect on, as a family its a weight lifted to know Ayda now has access to the best possible treatment.

“Her brother is especially relieved she now has Orkambi as he begins to understand her condition more and how it will help his sister.”

Both Dave and Stacey are aware the treatment will not cure the cystic fibrosis but it gives them a boost and more energy as a family to fight.

Dave added: “We are so grateful that Orkambi has finally been made available on our wonderful NHS, but four years was an unacceptable amount of time to wait, and lessons must be learned in the future.

“Sadly hundreds of cystic fibrosis lives were needlessly lost during the wait for Orkambi.”

« Previous post 'The Sonographer Had Never Seen Anything Like It!' - Rock Fan Dad Given Surprise Performance After Unborn Baby Makes Heavy Metal Sign During Baby Scan
Next article » 'I Can’t Believe My Wish Has Come True!' - 101-Year-Old Had Her Lifelong Wish Granted - After She Was Enrolled To Become Britain's Oldest BEAVER