‘Get married and be a mum’ Brave bucket list of teen given a year to live.

Collect of Hollie Owen from East Grinstead, West Sussex, who suffers from a life-limiting illness condition called Scleroderma. See SWNS story SWBUCKET; A stunning teen who was told by doctors she only has a year left to live has refused to give up and will spend her last few months fulfilling a heart-breaking bucket list Ã by getting married and trying to become a mum.Hollie Owen, 19, was told that the rare auto-immune disease she suffers from, scleroderma, has become so aggressive it has caused life threatening scarring to her heart. Doctors predicted that she could only have as long as 12 months left to live, so her family and friends have rallied around her to organise a fund so that she can experience as much as possible. Hollie was diagnosed with the rare disease, which affects her joints, limbs and skin as well as internal organs, in 2013. As the disease ravaged her body, Hollie was left taking up to 40 pills every day Ã as the disease caused her once-luscious lips to shrink.

A teen with a year to live will spend her last few months fulfilling a heart-breaking bucket list – by getting married and trying to become a mum.

Hollie Owen, 19, was told the rare auto-immune disease she suffers from, scleroderma, has become so aggressive it has caused life threatening scarring to her heart.

Doctors predicted that she could only have as long as 12 months left to live, so her family and friends have rallied around her to organise a fund so that she can experience as much as possible.

Hollie was diagnosed with the rare disease, which affects her joints, limbs and skin as well as internal organs, in 2013.

As the disease ravaged her body, Hollie was left taking up to 40 pills every day – as the disease caused her once-luscious lips to shrink.

Scleroderma only affects 5,000 people in the UK and Hollie’s doctors said they only see one case a year as severe as hers.

Hollie, from East Grinstead, West Sussex, said: “Scleroderma is a very hard illness to explain to somebody that has never heard of it before.

“There is no cure for it at the time being and it involves several symptoms.”

Hollie struggles with everyday tasks many take for granted – like opening a can of Coke.

She was forced to drop out of her hairdressing course at Central Sussex College two weeks before her final exams because she lost the ability to hold a pair of scissors.

When Hollie, who sadly has more bad days now than good ones, found out just a month ago she could soon die she was inconsolable.

She said: “When I found out, it was very shocking. I burst out into tears.

“I almost didn’t believe what they were saying because I felt well.

“If the doctors had said ‘how do you feel now’? I would have said ‘I’m feeling really well – better than I did before’.

“But obviously they told me that inside I’m not doing that great.”

Hollie has also been told she isn’t eligible for a heart transplant because the disease will only attack the new one.

She has been fitted with a pacemaker to shock her heart back to life, but her body is not responding to the standard medications used to try and stop the disease.

But refusing to give up, Hollie has compiled a bucket list of achievements – ranging from visiting the Maldives to getting married and becoming a mum – while she searches for alternative treatments in other countries.

She said: “I’m looking into stem cell transplants, which I’m not eligible for in this country.

“I believe there is something out there for me, I have to.”

Hollie’s friends and family have set up a GoFundMe page so they can raise money for Hollie to tick items off her bucket list, which has already raised more than £6,000.

Rebecca Ruler, 32, the sister of Hollie’s long-term boyfriend Matthew Phyall, set up the page to help Hollie do as much as possible in the next year.

Matthew, who has vowed to stick by the ‘love of his life’, said: “When Hollie told me the news, it was devastating.

“I just thought ‘There’s nothing I can do. I can’t even give her my heart.’

“But I had to do something. I couldn’t just sit back, so I got together my extended family and started organising some fundraising.

“She has a list of things she wants to do, like going on safari and swimming with dolphins.

“Depending how well she is feeling, we want her to be able to do as much of it as possible.”

Future sister-in-law Rebecca added: “Hollie is completely overwhelmed and so thankful for all of the donations that have come in.

“She never even knew I set it up until we started receiving donations.

“We are also going to try and raise as much as possible at the charity event we’re running in October.”

Hollie will be helping run a Halloween fundraising party on 31 October at the Horton Kirby Village Hall in Kent.

Rebecca said: “It gives her something positive to work towards and it’s a nice break from all the doom and gloom and the comments online are really uplifting.”

Generous Hollie, who has been campaigning to raise awareness of the disease will donate 10 per cent of the proceeds to the Raynaud’s and Scleroderma Association.

Elizabeth Bevins, CEO of the charity, said: “We are proud to be supporting Hollie’s family in their quest to help Hollie face the challenges that this autoimmune disease has presented such vibrant young woman.

“We are so appreciative, too, of their fundraising efforts for the charity that supports those with this rare connective tissue disease.”

Hollie’s doctor Benjamin Schreiber from the Royal Free Hospital in London, where she is being treated, is also “proudly” supporting her fundraising efforts.

He said: “Hollie understands that it is hard to predict the future for her, but if the disease gets much worse the heart will not manage to cope with day to day living.

“Scleroderma affects about 5,000 patients in the UK, but despite being the national centre of expertise we only see about one case a year with severe heart involvement like Hollie.

“For anyone given this diagnosis, the news would be devastating.

“It is particularly difficult for Hollie and her close friends and family because she is only 19.” 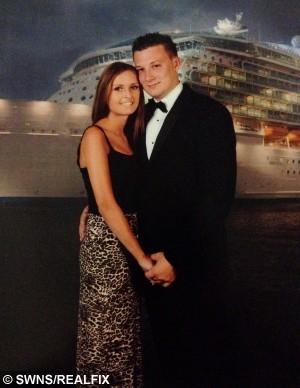