Alesha Wilcock (7), who has Parry-Romberg syndrome. Most seven-year-olds would rather stay at home and play then go to school, but Alesha Wilcock is no ordinary little girl. See MASONS story MNFACE. She was diagnosed with Parry-Romberg syndrome when she was four. The rare disorder causes half of the skin and soft tissue on one side of her face to deteriorate and shrink. Her mum, Lisa Wilcock, 27, said the condition makes Alesha’s face look like its eating itself. The pregnant mum-of-three said: “Parry-Romberg syndrome is her body attacking itself. When she was younger I noticed her face looked different. If you look at her face it looks twisted. You can see her cheekbones and skull. But she just gets on with it, she takes her medication twice a day and never complains.”

The mum of a brave seven-year-old girl with a rare skin disorder that causes her face to look like it is eating itself has called for greater awareness of the condition.

Alesha Wilcock was diagnosed with Parry-Romberg syndrome when she was four, which has caused the skin and soft tissue on one side of her face to deteriorate and shrink.

The rare syndrome occurs randomly for unknown reasons and is estimated to affect about 1 in 250,000 people.

Mum Lisa, 27, described how the condition has affected Alesha’s appearance.

The pregnant mum-of-three said: “Parry-Romberg syndrome is her body attacking itself.

“When she was younger I noticed her face looked different.

“If you look at her face it looks twisted. You can see her cheekbones and skull. But she just gets on with it, she takes her medication twice a day and never complains.”

Dad Darren Wilcock, 36, said: “It took quite a long time for her to get diagnosed as the syndrome is so rare. We didn’t know what it was.”

Lisa said she would much rather people ask about the condition than simply stare.

She said: “It is so rare. I would like it out there a little bit more so people can understand it better. More awareness would be good.

“At school some of the parents say ‘Do you mind if we ask what’s wrong with her?’. It’s good because I’d much rather you ask me than just stare at her. It’s just so obvious to people. I don’t mind talking about it. And Alesha knows quite a lot about it too.”

Alesha, who lives with her older brother, Kieron, 10, and a younger sister, Maddison, four, in Kent has to have blood tests every four weeks to make sure her liver and kidneys are working properly as the medication she is taking is so strong.

The seven-year-old had an operation in November which replaced some of the fat in her face, with some taken from her thigh.

Her parents said it was heartbreaking to see her afterwards, as she was covered in bruises, but that she did not let the operation get her down.

Lisa said: “We just hope that these operations will work for her – that she can basically look like a normal child. We just want her face all sorted so she looks normal to other people. 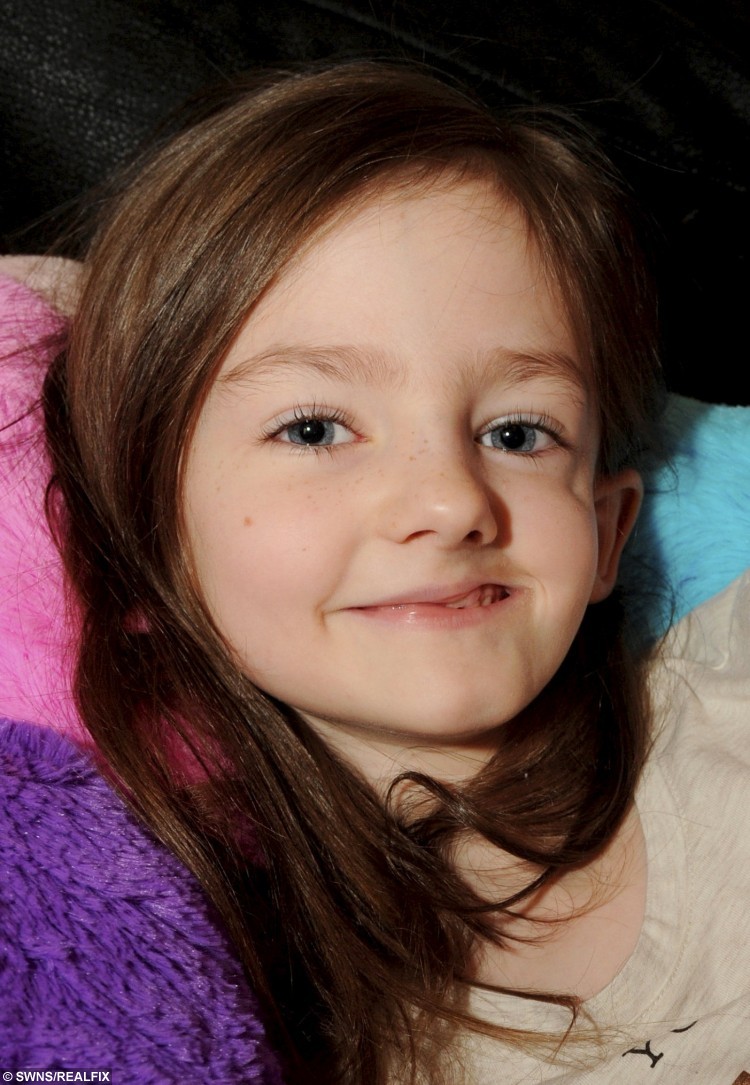 Lisa described Alesha’s enthusiasm for education and how, despite having to miss a lot of school, she is still remains top of her class.

She said: “My biggest fear is that her school work is affected. But she just gets on with it. I’ve never seen a child like it. She’s just amazing. We are extremely proud of her. She’s come so far. She never complains about anything.

“She absolutely loves school. Her work is fantastic and her teachers tell us that she’s doing well. She’s really clever, I don’t know where she gets it from.”

“She loves anything educational. She’s not into toys. She’d rather sit down and read, write or colour. She was a nightmare to buy for for Christmas!”

Her teacher Tracey Sears was so proud she has nominated Alesha for a Pride in Medway award, which celebrates “marvelous people in Medway who simply make the area special”.

Tracey said: “She has facial disfigurement and never complains. She is a role model to others.”

Mum Lisa said Alesha was thrilled to be nominated for the award.

She said: “I don’t think it has sunk in. It’s a bit of a shock. She saw her photo in the paper and couldn’t stop smiling.”

For Christmas, Alesha’s parents bought her a pink guitar and a giant cuddly caterpillar, which she named Colourful.