HomeFamiliesHealthMost Popular‘Give Us A Break!’ – Disabled Women Who Can Barely Speak Has Had Her Benefits Cut After Government Deemed Her “Fit To Work” 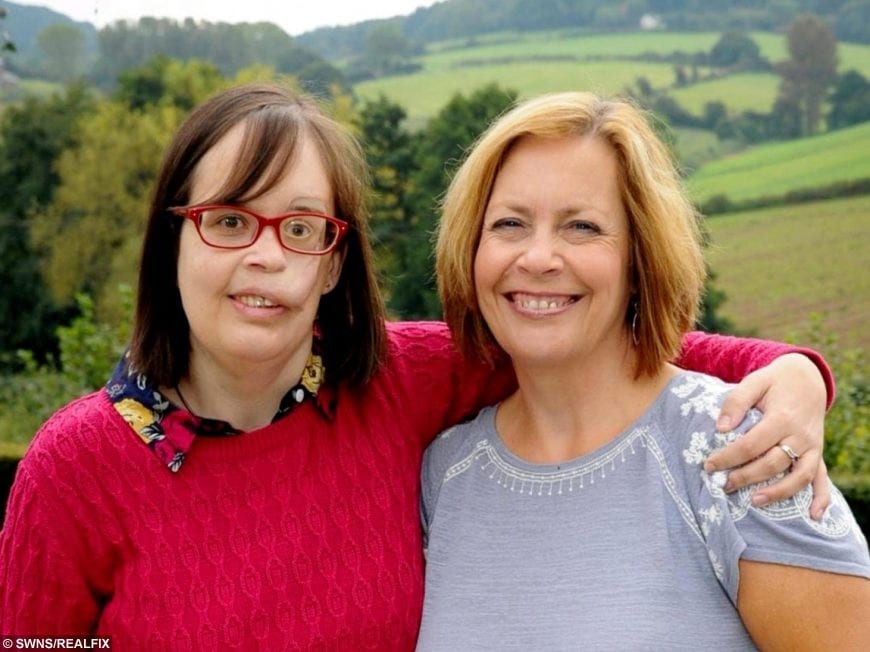 A disabled woman with a rare genetic condition which has left her barely able to speak, eat or breathe had her benefits stopped after the government deemed her “fit to work.”

Helen Boughen, 33, was told she isn’t disabled enough despite a debilitating string of health issues which causes tumours all over her body and led to her losing an eye.

She has undergone 16 operations in the last 16 years – including radical surgery to remove a tumour in her face, which then had to be rebuilt.

Her underlying illness, neurofibromatosis, causes tumours to grow along the nerves and back of her head and has left her with lesions on her brain and spine.

She has difficulty speaking, eating and breathing and no feeling in one side of her face as the bones in her head are so weakened by gruelling radiotherapy.

Three metal pins keep her false eye in place and her hips are weak because that is where surgeons have taken most bone and muscle for the facial reconstruction.

On top of that, she also has Asperger’s syndrome, a form of autism, and finds it hard to carry out most tasks because of the the ongoing strain on her body due to surgery.

Despite this, the Department of Work and Pensions (DWP) recently ruled she was not eligible for ANY allowance from the state as a result of her disability.

Helen, of Ross-on-Wye, Herefordshire, had been getting Disability Living Allowance (DLA) to help her live as independent a life as possible.

But under new rules she was reassessed for its replacement, Personal Independence Payments (PIP), and her money was stopped.

Despite Helen’s condition deteriorating further since first getting DLA, the assessor said she did not qualify in any way.

On the scale used to determine need Helen got 0 points – meaning the Government believed she was as able as anyone else.

Mum Pauline, 62, a retired occupational therapist, said: “When this happens after all she has been through you think, give us a chance.

“Give us a break, rather than piling it on. I want to show how unfair it is that people like Helen are treated like this. It is cruel.

“It envelopes you in sadness. How awful is it that in this country it has come to this?

“It was so rotten for Helen. As a mother you think: What else can I do?”

Pauline and husband Colin, 71, of Pontshill, Herefordshire, say they have done all they can to help their daughter live independently.

On the £928 she received in DLA and Job Seeker’s Allowance (JSA) she managed to live in a flat in Ross-on-Wye, and run a small car to get her to hospital appointments.

Helen has tried for hundreds of jobs, and gets lots of interviews but has not been successful as “she looks different.”

Pauline said the Jobcentre sends her daughter to interviews for waitressing or bar work, which she cannot do “because she does not have the strength”.

She and mum think it is because employers’ like “ticking the box” about interviewing disabled people.

Mum-of-three Pauline added: “I also want people to know that not everyone who cannot get a job is doing it because they are lazy.

“It is so emotional and wearing, especially when you are also dealing with many other health issues.”

Helen and her family appealed the decision and following intervention from her MP Jesse Norman and her local newspaper her benefits were partially reinstated.

Pauline said she has now been granted £87 a week, which is still only slightly more than half of what she lost, after a mandatory reconsideration.

And although it leaves her more than £70 a week out of pocket, Pauline says she won’t fight for the rest because they cannot face the stress.

Helen could take her case to a full appeal, although that would probably not be heard for a year or so because of delays in the appeal system.

Pauline said: “We are so tired of this. We cannot fight any more. It has been going on for five months already and that has drained us enough.

“We should not have had to have gone through this awfulness. We could appeal, but Helen told me: ‘No, I cannot do this’.

“Helen has a big meeting on Friday about her ongoing medication and she isn’t feeling that great.

“There is slight relief now after months of stress, but then it hits you again.

“I hope the publicity will give other people the confidence to appeal and show where they can go for help. It’s really hard.