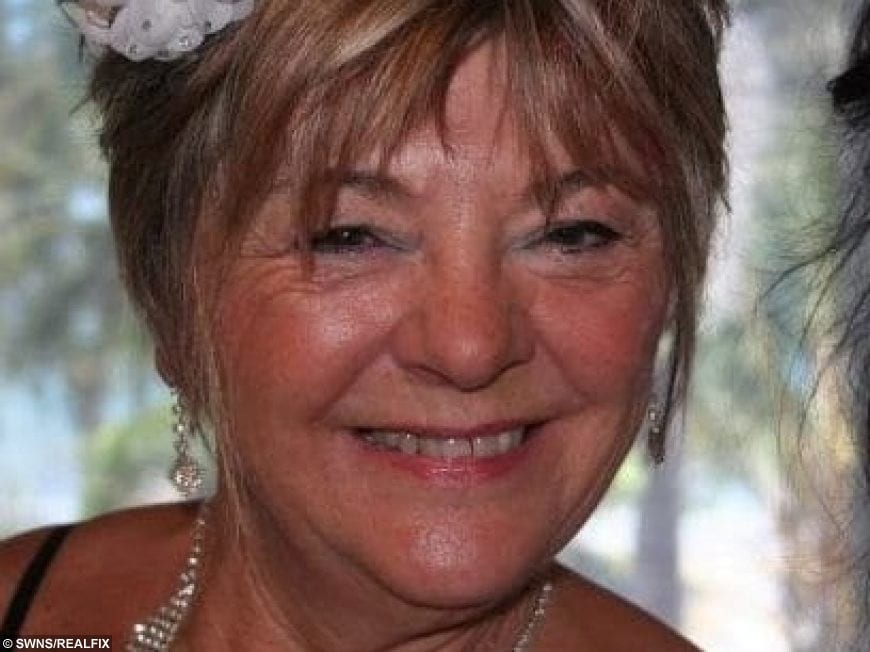 A grandmother who nipped out to buy flowers woke up in hospital five days later unable to recognise ANY of her relatives for weeks.

Liz Brewster, 73, popped to her local garden centre but instead of buying flowers, ended up spending a month in hospital with severe memory loss.

The pensioner, from Carnforth, Lancashire, suffered a potentially life-threatening bleed on the brain caused by an aneurysm as she queued up at the till to pay.

It caused her to black out, faint, and require emergency surgery to stop the bleeding from causing any serious long-term damage.

Doctors prevented Liz from suffering a stroke or any life-changing injuries, but the grandmother-of-six was left not knowing who any of her loved ones were, for four weeks.

Retired nurse, Liz, said she remembers waking up in Royal Preston Hospital not knowing who the loved ones gathered around her bedside were.

“I didn’t have a clue who any of the people stood around me were”, said Liz, who is engaged to partner of ten years, Charlie Moody, 69.

“My daughter was there and so was my partner and eldest grandson. But I just remember thinking ‘who are these people’.

“When Charlie walked in I said ‘who is this man’. I was surrounded by my family but I didn’t recognise any of them.

“At first I thought I was in a hospital that I used to work as a student nurse and closed years ago.

“It took about four weeks before I could recognise people again.”

Mother-of-three Liz suffered the muddling memory loss back in October 2013.

She was house-sitting for her daughter, Sarah O’Brien, who was on holiday at the time, and decided to nip to the garden centre to buy some flowers and make an arrangement for when she returns home.

But as Liz queued up to pay she began to feel dizzy and collapsed on the floor.

Luckily for her, someone stood close by was able to catch her as she fell, which stopped her from suffering any injuries as she tumbled to the ground.

Liz vaguely recalls being wheeled into the back of an ambulance, she is unable to remember another thing until three days later when she woke up in a hospital bed.

“I just remember feeling incredibly dizzy and looking for somewhere to sit down”, she said.

“Then I don’t properly remember another thing until I woke up in hospital.”

Liz was rushed to the Royal Lancaster Infirmary where doctors performed an MRI scan to find out why she collapsed.

Medics found she had suffered a brain aneurysm, a swollen blood vessel which had burst, causing a bleed on the brain.

Still unconscious, Liz was then transferred to the neurology unit at Royal Preston Hospital for specialist treatment.

Surgeons performed an operation to close the aneurysm and stem the flow of blood.

She eventually woke up, three days later, having escaped any serious long-lasting injuries, but with no idea who her loved ones were.

“I kept swapping people’s identities in my head. I thought a woman in a bed opposite me was a colleague from work.

“It’s scary to think how well I felt the morning I went to the garden centre. I felt great, and then this happened.

“Things like this teach you to make the most of every day, because you just don’t know what will happen.”

Liz said she remembers the “enlightening” moment she realised who Charlie was for the first time since passing out.

She likens it to a light bulb being switched on, and recalls being overcome with a sudden realisation.

Liz said: “My memory started to come back after three-and-a-half weeks gradually.

“I remember being in bed and hearing the nurses saying to my family that I was still very confused.

“And I thought ‘no I’m not confused, why do people think I’m confused?’.

“It began to twig that I’ve been talking nonsense.

“I remember Charlie being sat by my bed. For a while I thought who is this man and why won’t he go away?

“Then I thought, ‘oh I know who you are, you’re Charlie’. Everything suddenly began to come into focus.”

Liz went on to spend a month recovering in hospital and was put through surgery a second time as she kept drifting in and out of consciousness.

It took until the very end of her stay in the hospital for her to begin to regain her memory.

Liz went an incredible four weeks without knowing who her family who had come to visit were at all.

Whilst she was allowed home in November 2013, Liz said it took around six months for her to get back to relative normality.

She recalls popping out for a walk and forgetting where she was going.

Liz also struggled to remember how to write or arrange flower displays – which is one of her main hobbies.

“I remember being presented with flowers and I didn’t know what they were.

“I tried to write too, but I couldn’t make sense of what I needed to do. It was very surreal and a very confusing time.

She gets around her memory problems by writing out long list, and ticking off chores and daily jobs as she goes along.

Whilst this presents an everyday challenge for her, Liz said she will be forever grateful she hasn’t suffered any life-changing injuries.

“When I came to terms with what had happened I felt so grateful things didn’t turn out worse for me.

“It was a completely enlightening experience for me to lose my memory and get it back again.

“It’s a weird feeling, thinking what you thought was right was actually very wrong.

“But it made me question myself a lot. I wasn’t sure what was real and what wasn’t anymore.

“I felt pathetic. I felt bad because people had visited me in hospital and I had no idea.

“I wanted to phone people and apologise.

“I felt like I had let a lot of people down.

“I could have ended up quite disabled. It only went out to the shops but it could have been life-changing.

“I feel lucky I didn’t have a stroke or end up being paralysed.”