GRAPHIC: Brave boy recovering after foot is almost ripped off by an escalator

Picture Shows 6-year-old Eaun Hird at his home in Carnforth, near Lancaster in Lancashire. Whilst on holiday in Durban, South Africa Euan got his foot trapped in a faulty escalator. See copy SWFOOT : A six-year-old boy was screaming in agony for three hours and almost lost his foot after his leg became stuck Ã in an ESCALATOR. Little Euan Hird is lucky to have both feet after his right leg was mangled in the metal staircase when he slipped through a hole between the steps. It took rescuers almost three hours to free the screaming little ladÃs foot Ã just 20 minutes before medics ruled they would have to amputate. The lad, from Carnforth, Lancashire, was on a dream holiday in Durban, South Africa, with his parents and grandparents when disaster struck.

A six-year-old boy is struggling to walk after nearly losing his foot when it became trapped in a shopping centre escalator on holiday.

Little Euan Hird screamed in agony for THREE hours as rescuers fought to free him when his right foot slipped through a gap between the steps.

They finally cut him free just 20 minutes before they would have been forced to amputate the limb.

Euan, from Carnforth, Lancs., was on a dream holiday in Durban, South Africa with his parents and grandparents when the accident happened.

Dad Will Hird, 28, said: “Our holiday was meant to be a luxury trip but it turned into a nightmare.

“When I heard the escalator break and saw my son’s foot was trapped, I feared for the worst.

“Because it took rescue teams so long to get him out, the medics were 20 minutes away from cutting his foot off to free him.”

“When they freed him and cut off his shoe, there was blood everywhere, it was like something out of a horror movie.

Euan’s right foot got stuck in a hole in the escalator at Gateway shopping centre and it took struggling rescue teams three hours to free the screaming youngster.

He was rushed to a nearby hospital where doctors frantically tried to save his mangled foot, which they feared would have to be amputated.

After two ops to reset his bones and scores of stitches, wheelchair-bound Euan was eventually discharged on the fifth day.

Despite doctors warning he may never walk again, eight weeks after the horror accident little Euan was allowed to fly home and is now slowly getting back on his feet.

Will said: “We’re counting our blessings that he’s still got his foot.

“But it was touch and go for a while.

“No parent should have to go through this – we’re just glad to have him home now.” 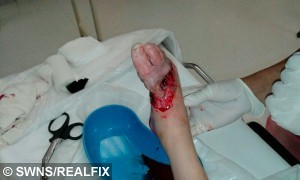 Retail manager Will and wife Nishala, 32, were on holiday with their children Euan and three-year-old Zara, and Nishala’s parents Ray , 68, and Gourisha Parkinson, 60.

The family were two weeks into their three-week visit to Durban when they took a trip to the shopping centre.

Will said: “I was in front of my son on the escalator when all of a sudden it juddered and I heard a loud bang.

“When I turned around, Euan was screaming and I saw his right foot was trapped in a hole between the steps.”

Quick-thinking Will pressed the emergency stop and called for help.

But fire and ambulance crews were not able to take the escalator apart to free Euan and spent three hours struggling before eventually managing to get his bloody leg out of the jagged hole.

Fortunately, two shop fitters arrived and were able to free Euan by taking off the front panels of the escalator.

Euan was rushed to Netcare Umhlanga Hospital where medics battled to save his foot.

Will said: “There was blood everywhere. It was an awful sight.

“It was so mangled we all thought he was going to lose it, or be left unable to walk.”

The youngster was sent for two operations to reset the broken bones in his foot and toes, and to re-stitch the skin.

His terrified parents were forced to shell out £4,000 on medical bills to save their son’s foot, but will be able to claim this back on their travel insurance.

Will said: “Poor Euan wasn’t allowed to fly, so I brought my daughter home with me and had to leave my wife and son in South Africa.

“It was horrible leaving him there, not knowing if he would be ok.”

Euan and Nishala finaly flew back home last week, and now the little lad, whose foot is still heavily bandaged, is starting to take his first steps after the horror accident.

Will said: “Luckily Euan is a really positive child so has kept upbeat. His foot is in a cast now, but it looks like he will be fine.” 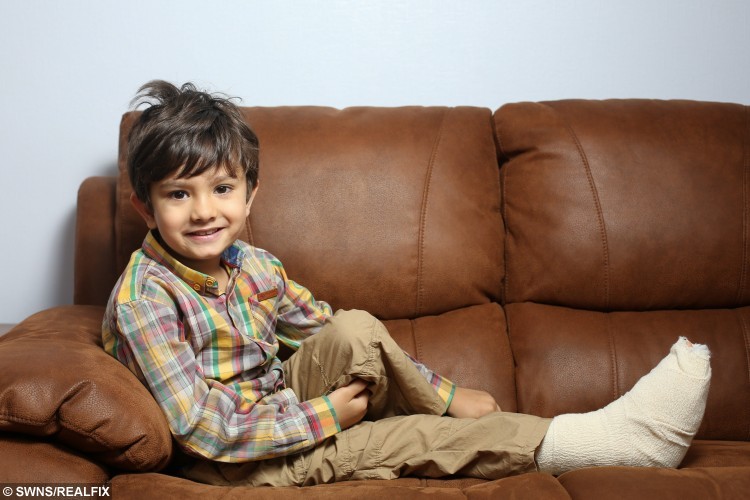