by RealFix
in Health, Relationships
0

Bride and Groom Christine Sharlotte (nÃe Carroll) and Taffy Sharlotte, who suffers from a form of dementia, kiss at the end of their wedding ceremony, at Leeds Town Hall, in Leeds, West Yorkshire, on 15 September 2015. See Ross Parry Copy. RPYWED: Love-struck Christine Carroll has speedily arranged a wedding to her dementia-suffering soul-mate Taffy Sharlotte so that they can tie the knot while he still remembers her. The pair met just three years ago and thought they had the rest of their lives to share together until they received the bombshell that 62-year-old Taffy was suffering with a horrifying life debilitating form of dementia. Yesterday was a happy day as they married in a quiet ceremony with friends and family at Leeds Town Hall, West Yorks., but it was tinged with sadness as they know Taffy will deteriorate over time. Only the day before the wedding father-of-five Taffy was upset because he could not remember his name, and worried how he would be able to sign the register.

A dementia sufferer who is rapidly losing his memory brought his wedding forward – so he can remember taking his vows.

Love-struck Christine Carroll and Taffy Sharlotte were busy planning their future together when they received the bombshell news that he was suffering with a crippling form of dementia.

After being dealt the devastating blow in May, the couple rushed to arrange their nuptials – as Taffy’s condition deteriorates every day.

Only the day before the wedding, father-of-five Taffy, 62, lost the ability to remember his own name and thought he may be unable to sign the register.

But he made it down the aisle on Tues 15 September in a quiet and emotional ceremony with friends and family at Leeds Town Hall, West Yorks.

Christine, 58, said: “We do not know how long Taffy has. He already suffers with the illness. When Taffy was finally diagnosed we asked the doctor about marriage and whether he would be able to be married if he wasn’t of sound mind.

“He advised us that he was okay to get married but it ought to be sooner rather than later. So we had to get on with it.”

“We were absolutely devastated when he was diagnosed. How cruel to finally find Mr Right and this happens.

“But I wouldn’t change our time together for the world.

“We have had some lovely times together.

“I’m creating an album show I can show him in the future in the hope it jogs his memory.”

Mother-of-two Christine, from Leeds, met Taffy in a local shopping centre three years ago after both separating from their spouses.

They were old acquaintances so Taffy asked Christine out for a drink that she owed him from when they were in their teens.

The personal carer said: “Taffy says he should have married me years ago. He started pestering me to get married when got together but I wasn’t so keen to get married, and didn’t see the rush.”

But as their relationship flourished Christine could see odd behaviour.

He would say he was going to the kitchen and would use the wrong door, forget to wash shaving foam off his face, and put all his worn socks in a pile under a chair.

A year after meeting the couple went to the doctors together – but it took two years for Taffy, whose real name is Nathaniel, to be fully diagnosed with Dementia with Lewy bodies (DLB) a type of dementia that shares symptoms with both Alzheimer’s disease and Parkinson’s disease.

One of the characteristics of this illness is that sufferers hallucinate, most often of people.

Taffy – who worked in a warehouse until his diagnosis – often goes to bed thinking their are a room full of people staring at him.

Devoted Christine said: “Taffy is such a caring man. I feel so lucky to have met him. Every morning he gets up and makes me a cup of tea and tells me he loves me.

“He loves me so much and is happy. He jokes about his condition and we get on with things as much as we can.”

He can take their dog, jack russell Bella, out for a walk because she will tear him back if he tries to go in another direction, but otherwise he forgets what he has gone out for.

Taffy gets up in the night and moves things – he once moved all the furniture from one bedroom to another- without being heard.

He will often lose things and in the run up to the wedding he has lost his wallet, his bank card, his cuff-links and his aftershave.

The couple are going to Venice for their honeymoon, but taking along some family and friends to help out.

“Taffy can get a bit confused when he is somewhere unfamiliar,” said Christine.

“So if family come with us then he will be assured it is okay.”

Taffy said: “I thought my life had ended when I was diagnosed with dementia – but it hasn’t, it has just started.”

Instead of presents, the couple are asking that guests donate money to the charity Alzheimer’s Society. 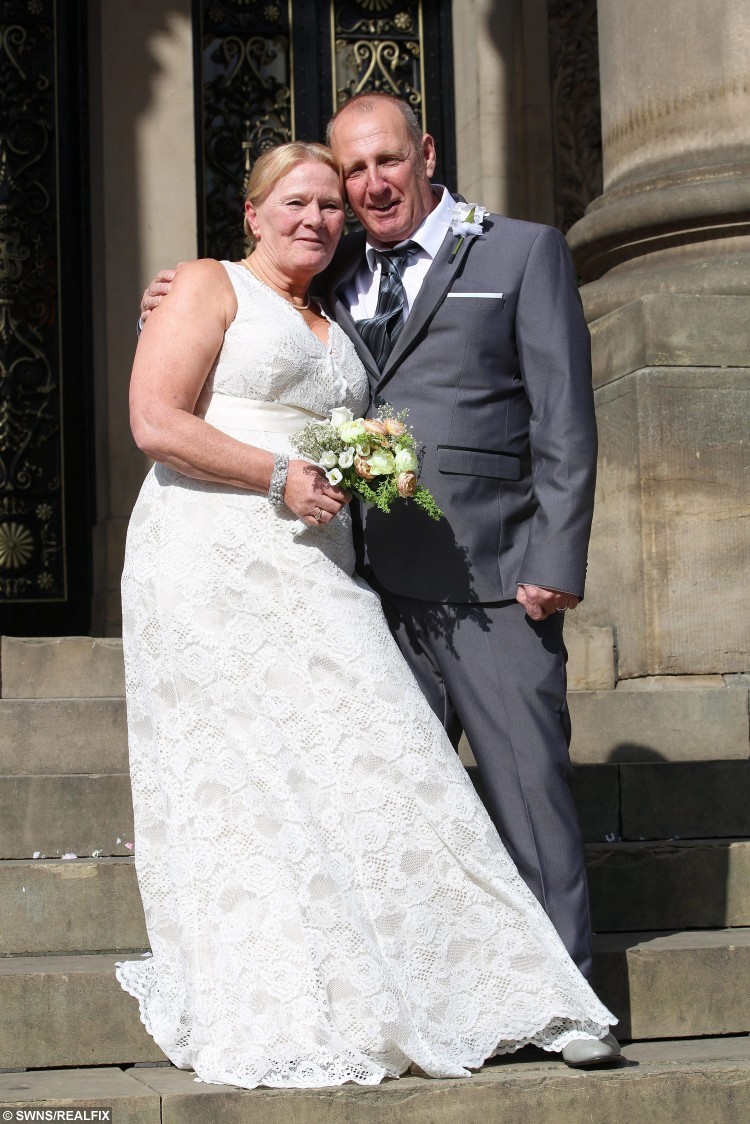