by RealFix
in Animals, Cute, Health, Must Read
0

A tiny hamster was saved by CPR when it suffered a heart attack during surgery – to remove an infected eye.

Plucky Russian dwarf hamster Tom went under the knife after suffering from a life-threatening luxated lens, which was causing a build up pressure on its left eye.

Owner Sarah Matthews, 40, rushed her beloved pet to a vets’ surgery after discovering the 11-month-old hamster had difficulty seeing.

The hamster, which measures just 6cm (2.3ins) in weighs just 20g, had surgery after two courses of antibiotic treatments failed to stop it flaring up.

Tom underwent a pioneering operation to remove the infected eye at Donnachie and Townley Veterinary Surgeons in Stafford in August.

Surgeons used magnifying goggles and needles as fine as a hair to extract the eye during a 25-minute operation.

During the surgery, which cost Sarah £178, Tom suffered a heart attack after suffering a reaction to the anaesthetic and required emergency CPR.

Sarah, a hospital worker from Stafford who has another hamster called Jerry, said: “My hamsters are my absolute pride and joy.

“Coming home to see Tom and Jerry always makes me smile, and I always want to give them the best possible life that I can.

“That’s why I became concerned when I noticed the cloud in Tom’s left eye.

“I knew something wasn’t right because, although he didn’t seem in any obvious discomfort, there was a white cloud on his eye.

“Since then, he’s really been through the wars with it.

“He kept on having eye infections, and every time one got treated, he would have another one a few days later.

“I think it must have been March that I first took to the vets, and since then there’s been a run of treatments for him.

“He’s had two antibiotic treatments, but the problem was still there.

“Eventually, they were able to diagnose it as a build of puss in the eye.

“When I was told that he might have to have the eye out, I was dumbstruck, but the vet explained that if it wasn’t treated properly, there was a chance his eye might explode due to the pressure, and that would obviously have killed him.

“I’ve had him since December and he’s such a little character, I didn’t think twice in agreeing to the surgery.

“So the only decision I could possibly make was to have the eye out.

“I was really nervous about the whole procedure because he’s so small and the vets explained he may not survive the trauma of having the anaesthetic.

“Apparently there were a few moments where they lost him, but every time he came back, because he’s a fighter.

“The whole thing must have been traumatic for him, but seemed to recover very quickly.

“We picked him up in the afternoon and by the following morning he was back to his usual self – you wouldn’t know anything had happened to him. 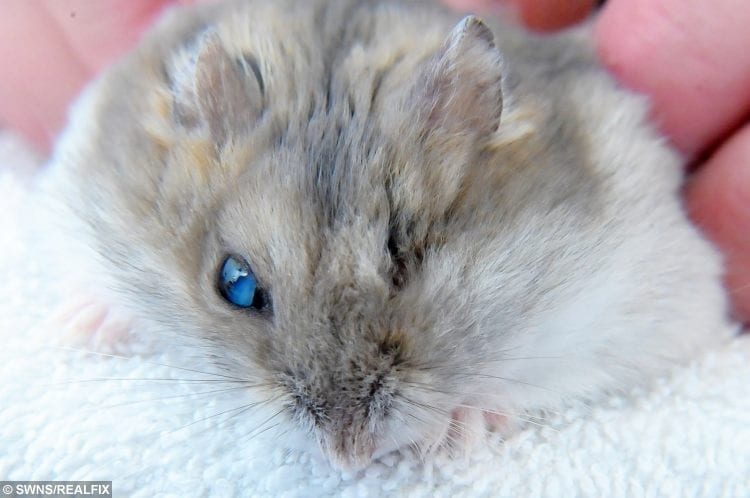 “He was back running around on his wheel, and he hasn’t had any further problems at all.

“He’s the fourth hamster that I’ve had, and I love him to bits.

“They are fantastic companions, and are lovely to live with.”

Vet Sarah Sheppard, who carried out the operation, said: “Tom was suffering from a luxated lens which causes an increase in pressure (glaucoma) within the eye and leads to the eye swelling.

“In most cases this becomes really painful.

“He wasn’t eating and was a bit grumpy, which is understandable given the pain he must have been in.

“We decided the quickest and easiest treatment in terms of pain relief would be to operate to remove the eye.

“Otherwise, the pressure build-up would have caused the eye to bulge and probably rupture.

“It was wonderful Sarah allowed us to operate because many hamster owners can be put off by the cost and also the fact that anaesthesia is notoriously difficult with rodents.

“The operation went well – it’s actually not a difficult surgery, it was just obviously quite fiddly because Tom was so small.

“It all went very well, although he did require some CPR because he struggled with the anaesthesia.

“A couple of hours afterwards he was back to normal, so we are very happy with the outcome.

“I’ve never carried out that surgery on a hamster before and I don’t know of any other such cases in our practice, so Tom has definitely been a pioneer.”

Vet Sarah Sheppard resuscitated Tom the hamster using her finger and thumb while blowing gently over the animal’s mouth and nose.

Ms Sheppard said: “When his heart arrested I did mini chest compressions using my finger and thumb.

“I also gently blow across his nose and mouth. I carried on doing this for several minutes until I saw his chest expand and I knew we’d got him back.

“It was pretty incredible but shows what is possible. I’ve never had to do compressions on an animal this small before but he is a fighter and he proved it.”