Hero survived being turned into a human fireball by his uncle

Terry Dunnage who has been awarded a seven figure payout after receiving extensive burns. See SWNS story SWBURN; A hero who survived becoming a human fireball when he tried to save a burning man's life has finally been awarded a seven figure pay out after a mammoth legal battle. Terry Dunnage, 37, was permanently scarred on half his face and body after he unsuccessfully tried to stop his uncle Vincent Randall, 45, from setting himself on fire. Father-of-five Terry was consumed in a petrol fireball and only survived by leaping from a first-floor balcony, and spent months in hospital fighting for his life. But when he tried to claim for damages on his uncle's insurance - which fully covered damages for accidental bodily injury - Direct Line refused to pay out.

A hero who survived becoming a human fireball when he tried to save a burning man’s life is finally set to receive over £1 million in compensation after a lengthy legal battle.

Terry Dunnage, 37, was permanently scarred on half his face and body after he unsuccessfully tried to stop his uncle Vincent Randall, 45, from setting himself on fire.

Father-of-five Terry was consumed in a petrol fireball and only survived by leaping from a first-floor balcony, and spent months in hospital fighting for his life.

But when he tried to claim for damages on his uncle’s insurance – which fully covered damages for accidental bodily injury – Direct Line refused to pay out.

The parent company argued mentally-ill Vincent was not liable because he was delusional.

But after an exhausting eight-year ‘David and Goliath’ legal battle, three appeal court judges ruled the insurer was wrong.

Relieved Terry – who had to re-learn to walk and talk following the attack – will now be awarded a seven-figure payout.

Terry, from High Wycombe, Buckinghamshire, said: “I thought I was going to die and they actually read my final rights to me twice in hospital.

“I even lost my house because I couldn’t pay the mortgage, yet they still refused to pay out.

“It was very stressful spending years battling for justice whilst trying to recovery myself.

“I wanted to give up the fight many times as it was so disheartening.

“They made me feel bad for fighting for what was right and what I deserved.

“The joke is they spent so much money fighting me that they could have just offered me that in the first place and my life would have been so much easier.”

School cleaner Vincent visited Terry and his former partner’s home in Paignton, Devon, for a cup of tea in October 2007.

He had become increasingly delusional before his death and was convinced people were following him – and accused the couple of being involved.

Married Vincent announced he was going to his car to get a copy of Autotrader for Terry, but returned with a petrol can and a lighter.

The schizophrenic poured petrol over himself and said “tell me the truth or we’re all going up”.

Brave Terry – commended for his efforts in court – tried to grab the lighter, but it was ignited by Vincent, and the pair went up in a horrific ball of flames. 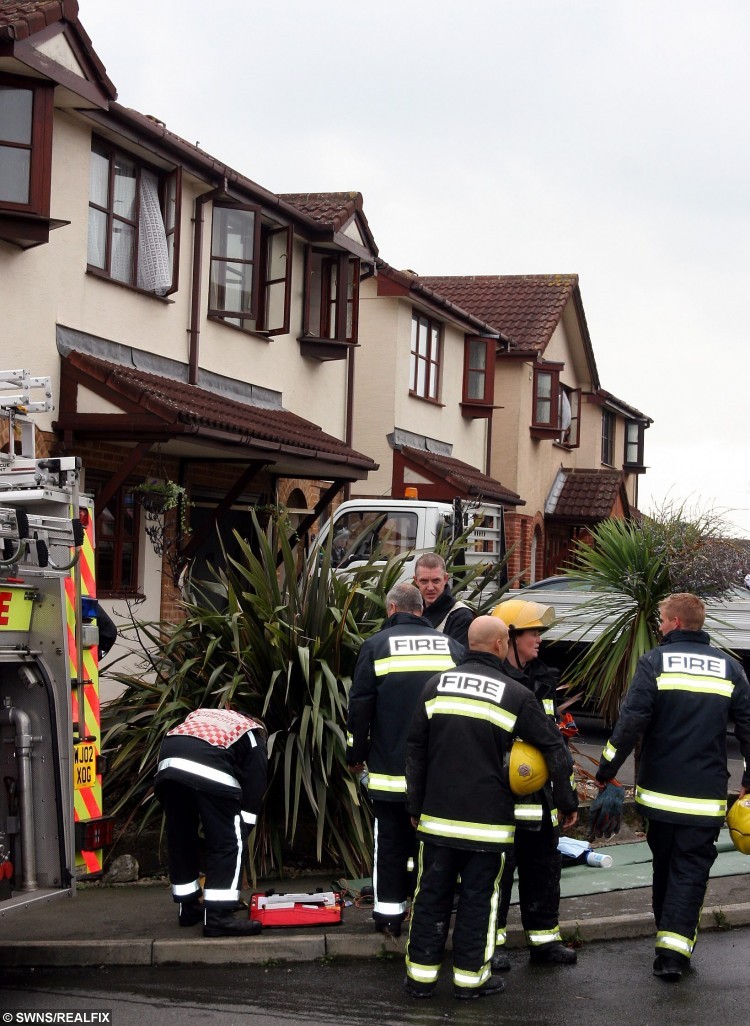 After unsuccessfully trying to drag his uncle towards the balcony, Terry leaped to safety as all his clothes burned off, leaving just a waistband of his jogging bottoms.

“My skin started dripping off my hands and my ears, but initially because of the adrenaline I couldn’t feel the pain,” he said.

“But by the time the ambulance got there I thought I was going to die. I went into shock and I thought that was it.”

Medics put Terry in a drug-induced coma for five weeks while they battled to save his life, and repair the burns to his face, arms, torso and ankle.

His family was called to say final goodbyes twice after he caught MRSA, septasemia and pneumonia, while fighting to survive at Bristol’s Frenchay Hospital.

But after daily operations and skin grafts as well as 20 blood transfusions he was woken up by medics, who reluctantly presented him with a mirror to examine his wounds.

“There was a monster looking back at me,” said Terry, who lost his damaged home when he defaulted on payments.

“I hated it. My whole face looked melted – my ears were melted to my face. I tried suicide twice.”

Vince’s household insurance with Direct Line, owned by UK Insurance Limited, covered the father-of-one if he ever became legally liable in damages for accidental bodily harm.

Terry made a claim on the policy, but it was rejected by a lower court last year on the grounds Vincent was so “deranged” his actions were “mechanical” so he could not be negligent.

But determined Terry – who had a no-win-no-fee lawyer – appealed the decision in the high court, in March 2015.

Three senior judges sided with him, and said he was entitled to substantial damages after deciding he was a “rescuer”.

Lawyers are currently negotiating the compensation amount, which is expected to run into seven figures.

Humble Terry plans to use the money to fund a project – The Terry Dunnage Foundation – to help injured people using music.

“I want to show other people there is hope when you experience something terrible.”

“Never give up, always keep going and always follow your dreams.”

UK Insurers Ltd – which Direct Line is a part of – refused to comment.