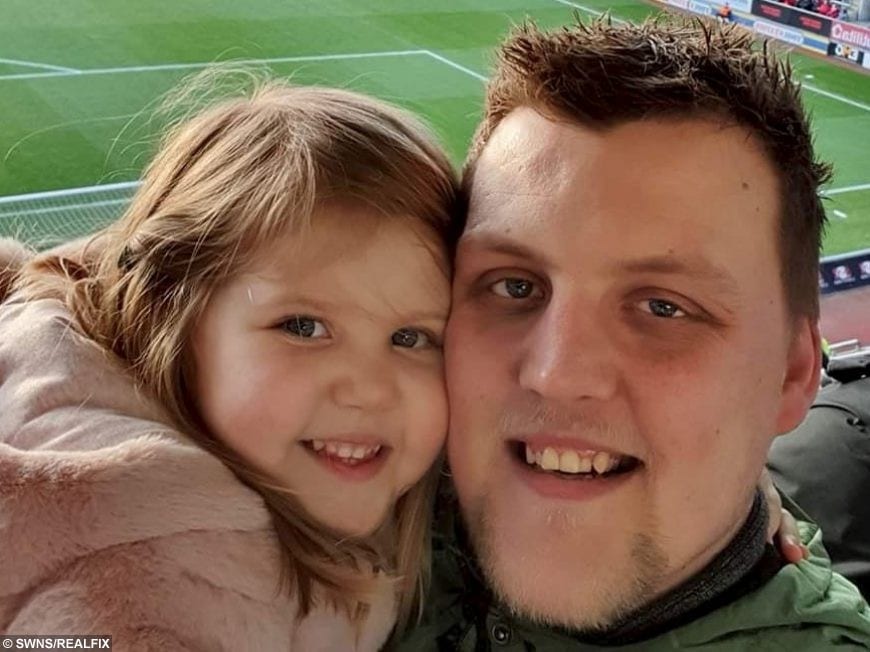 A three-year-old saved her mum’s life when she had a heart attack – by calling her grandma to tell her ‘mummy’s fell over’ .

Brave Aria Michael saved Jodie Michael by making the phone call to her ‘Nanna’ after she collapsed and hit her head just before school on January 28.

Once Aria saw her laying on the ground, she took her mum’s phone, found her grandma Diane’s number and calmly rang to tell her “mummy’s on the floor and is being sick”.

When the 25-year-old mum regained consciousness she started being sick but the calm tot reassured her she would be okay.

Jodie, who suffers with a genetic heart condition, said if Aria wasn’t there to make the life-saving phone call she might not have survived.

The cleaner said: “If she didn’t make that call, if she was just like any other little girl, I don’t know what could have happened. She saved my life.”

Jodie recalled how Aria told her “you’re going to be okay mummy” while she was on the phone with her grandma.

Diane immediately called an ambulance before speaking to Jodie’s brother-in-law, Dominic Michael, who went round to the house as he lived close by.

Eventually Jodie was rushed to Rotherham General Hospital and laid-back Aria dressed herself and headed to school after she knew her mum was going to be ok.

Jodie, from Rotherham, South Yorks., said: “I was shocked – she’s so smart.

“I was laying on the floor with my eyes closed but she was calm and explained to her nanna everything she needed to know.

“I don’t remember much after I collapsed but when I regained consciousness I was just worried for Aria. I didn’t know if she was petrified because her mum was on the floor.

“But she was so calm. I couldn’t believe it, she was telling me to go to the toilet to be sick.

“She’s so brilliant. It does panic me sometimes to think I can just collapse like that – but knowing Aria around gives me comfort.

“I was upset because I thought I should be the one taking care of her, not the other way round. It was like she was my mum.”

Aria has been awarded with the “star of the week” at school for her bravery but her proud parents said she has always been one to “stick it out”.

The superstar is taking is all in her stride and said: “I hope mummy is proud of me.

“I hope she doesn’t fall again.”

The little tot suffers with a coarctation of the aorta, the same genetic condition as her mum which means the main artery to her heart is narrow.

Aria has already undergone two surgeries – one when she was 16 days and another at three months old.

The clever tot has overcome the odds and loves going to school and often surprises her parents with how smart she is.

Jodie said: “She knows as many words as I do, and sometimes she’ll come home and say I word I don’t even know and I’ll wonder where she got that from.

“A cardiologist told us she’ll be behind at school because she had a few issues as a baby with her heart condition.

“But she’s overcome all of the odds. She’s not been left behind and she doesn’t let anything hold her back.”

Jodie had collapsed four times in the past five months and has been on leave for two weeks – but said she’s “afraid to leave the house”.

Her dad Jordan, 27, was at work at the time of the collapse but said he could rest easy knowing Aria was there.

The bus driver said: “Time was of the essence and thankfully Aria was on the ball, she did what she had to do.

“I was panicking because I was told my wife collapsed.

“I was amazed and gobsmacked when I found out Aria had called her grandma and saved Jodie. As a dad I was so proud of her.

“I was all over the place but seeing Aria so calm was so reassuring.

“She’s so brave. She had surgeries when she was 16 days old and when she was three months old due to her heart conditions.

“You don’t see three-year-olds doing what she does. Sometimes I forget she’s three not 30.

“After seeing her mum on the ground and saving her life, she just went to school. She’s so mature and clever.”