HomeEditor's PicksHealthHoly Smokes! I fell Out Of My Third-Floor Window While I Was Having A Cigarette 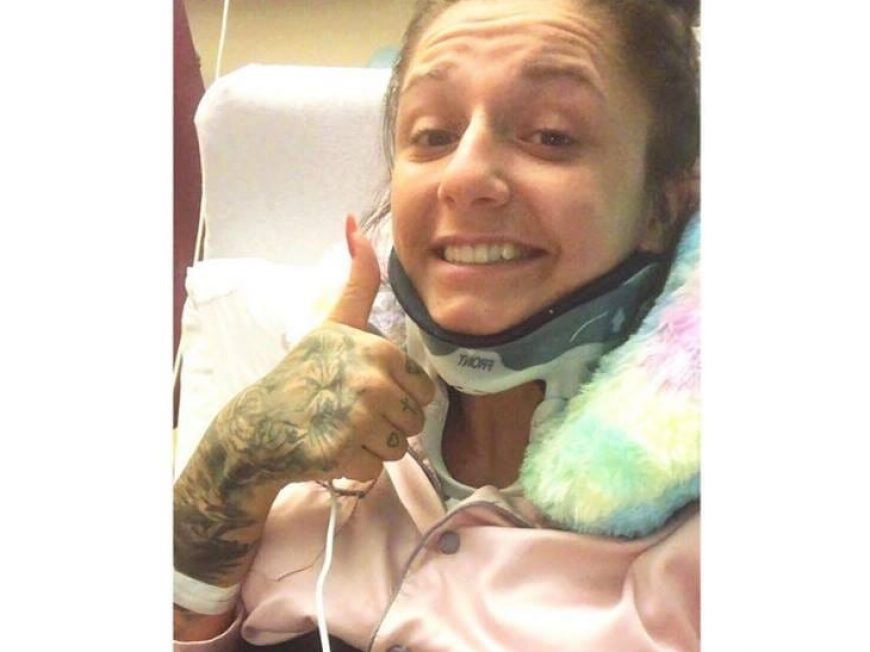 ‘Bed time,’ I called out to my little boy, Charlie, four, as he played with his toys on the living room floor.

‘Ok,’ I sighed, a soft touch. ‘But then it’s time to brush your teeth and go to sleep.’

‘Yes!’ he squealed, turning his attention back to his toy cars as he whizzed them around.

Thankfully, he didn’t protest any further when I went to tuck him into bed and he drifted straight off.

‘Ahhh, peace at last,’ I smiled at my boyfriend, Christopher, 27, as I settled back down on the sofa beside him with a cup of tea.

We cuddled up and watched a bit of TV.

‘How is it almost midnight?’ I said, glancing at the clock.

‘Before we call it a night, you have to watch this music video,’ Christopher said, pointing at the Foo Fighters on TV.

‘It’s great!’He got up to nip to the toilet, while I popped across to the window and lit up a cigarette to have a quick smoke – while still glued the screen.

I never usually smoke indoors, but I thought: ‘Screw it, I’ll only be two minutes.’

Lighting my fag, I leant on the window sill – half outside, half in – to prop myself up.

But just as I finished my cigarette and turned to flick the butt out, I lost my balance and felt myself falling out of the window.‘Arrgghhh!’ I cried, as I grabbed hold of sill and dangled out of the third-floor window – six flights of stairs up.

Christopher came running into the room, just as I was hanging there and rushed over to try and help me back up.

But as he clutched my arm, I slipped from his grip and plunged to the hard ground below.

It all happened so fast.I was knocked unconscious as I hit the grass in the communal garden outside of my flat.

Christopher sprinted down the stairs and dragged me up to the flat – while I was out cold.

Within 10 minutes paramedics arrived, but I was still out for the count.

They checked me over before loading me to a stretcher and carrying me carefully to the ambulance downstairs.Christopher called my mum, Claire, 46, who only lives five minutes down the road and she dashed over to look after Charlie.

The medics rushed me to Aberdeen Royal Infirmary, where I was rushed straight through.

I underwent CT and MRI scans, before a doctor came to deliver the results.

‘And you’ve fractured your L5 to L2 vertebrae in your spine.’

They explained I was lucky not to have been more seriously injured.

But I worried because I couldn’t move.‘Am I going to be paralysed?’ I asked.

‘We hope you’ll be able to walk again in around six weeks and you’ll need to wear a back brace for 12 weeks,’ the doctor told me.

A sense of relief washed over me. I couldn’t have imagined not being able to run around after my little boy.

He was constantly keeping me on my toes.

After a few days, I posted an update to Facebook to let all my friends and family know what had happened.

Despite my brush with death, I tried to make light of the situation, joking: ‘Yes I was sober and I still have all ten acrylic nails.’

After five days, I defied the doctors’ expectations and was able to get back up on my feet again – although I was a little unsteady at first.

After a week in hospital, mum brought Charlie to visit me.

I didn’t want him to see me in the state I was in at first, but I was missing him.

‘What happened mum?’ he asked, as he climbed on my hospital bed.

‘Oh I just fell over and hurt myself,’ I told him, not wanting him to worry and not wanting to scare him into never going near an open window again.

‘Are you sure?’ he quizzed.

The clever clogs sussed it was something more and eventually I told him the truth.

Finally after a week and five days I was able to be discharged and return home to Edinburgh, Scotland, with a zimmer frame to help me get around like an OAP.

It took me almost half an hour to slowly climb the stairs to my flat and I needed six weeks off my job at Sainsbury’s Bank, but eventually I got back to my usual active self.

Sadly, Christopher and I broke up while I was in hospital. What happened was a freak accident, but I definitely won’t be lighting up near a window any time soon.

Everyone’s asked me if I was drunk when I fell, but the worst thing is I was completely sober – I’m just a very clumsy person.