A hungry hound was lucky to escape with his life after sneakily wolfing down a barbecue chicken kebab – complete with an eight-inch wooden KEBAB SKEWER.

His owner Tracy Bowes, was initially left mystified when her pet went off his food and stopped behaving like his usual self.

When she took Hugo the vets for a check-up, an X-ray didn’t reveal anything seriously wrong.

Hugo was put on antibiotics but for the next four weeks the much-loved dog remained subdued with very little appetite.

Then, while taking Hugo for a follow-up vet’s appointment, Tracy noticed something “small and sharp” sticking out of his belly.

Tracy, from Leeds, West Yorks., rushed Hugo back to the vets and veterinary surgeon Rod Beardshall operated the same day.

Rod found the problems were being caused by a wooden skewer, which Hugo is thought to have sneakily wolfed down while Tracy was preparing a meal of barbecue chicken kebabs.

The skewer had been in his digestive system for several weeks but was still in one piece, with its handle lying in his stomach and its long, sharp section protruding from his abdomen. 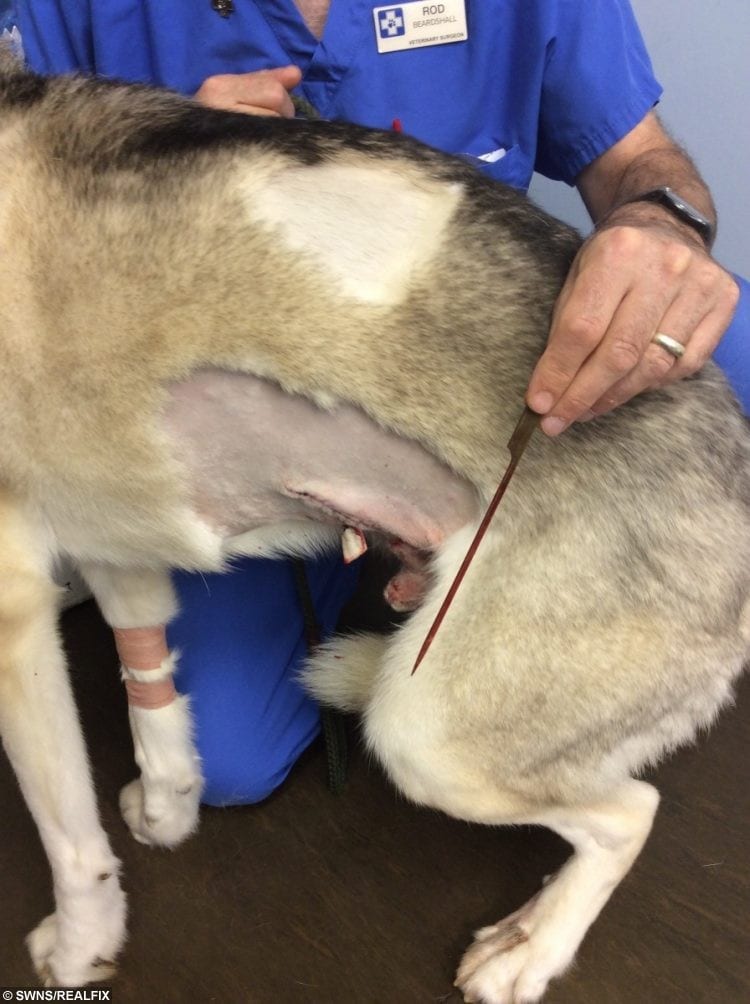 Tracy said: “It was eight weeks since we had eaten barbecue chicken kebabs and Hugo had obviously stolen one covered in raw chicken before we cooked the rest, swallowing it whole. It doesn’t bear thinking about really.

Super-vet Rod said: “In almost 30 years as a vet I have never come across a case like this one.

“As the skewer was made of wood it did not show up on the X-ray, but had introduced infection when it penetrated the stomach wall.

“He was very lucky not to develop a fatal peritonitis as it was a further four weeks before the cause of the problem was clear and the skewer was removed.

“Hugo is a very brave dog and responded so well to the surgery.”

Proud Rottweiler Gives Birth To One Of Britain’s Biggest Litters With 15 PUPPIES!

Proud Rottweiler Gives Birth To One Of Britain's Biggest Litters With 15 PUPPIES!

My Little Girl Saved My Life When She Told Her Teacher ‘My Daddy’s Hurting My Mummy!’

Air Hostess Gets Asked If She Is Meghan Markle By Passengers Up To Ten Times A DAY!