Ida Fermor with her husband Dudley who needs a new kidney and has put a note in his local post office to try and find a donor. See SWNS story SWKIDNEY; A great-grandfather left a heart-warming note in his tiny village post office for a "kind person" to give him a kidney - because he wants to spend more time with his wife. Dudley Fermor, 79, suffers from a Ãsmaller kidneyÃ and is desperate for a transplant to improve his livelihood Ã but is yet to find a donor. The retired agriculturalist bought a small bulletin space outside the village post office in Marden, Kent, for 50p a week to advertise his plea. The note read: ÃIs there anybody who can help me? I need a kind person to donate a kidney.Ã

A great-grandfather who needs a new kidney to stay alive has posted an appeal on a note – in his village POST OFFICE.

Dudley Fermor, 79, bought a small bulletin space outside his local shop for 50p a week to advertise his plea to find a life-saving donor.

His heart-warming note in his tiny post office asks for a “kind person” to give him a kidney – because he wants to spend more time with his wife.

The retired agriculturalist suffers from a ‘smaller kidney’ and is desperate for a transplant to give him more time so he can spend more time with the love of his life, Ida. 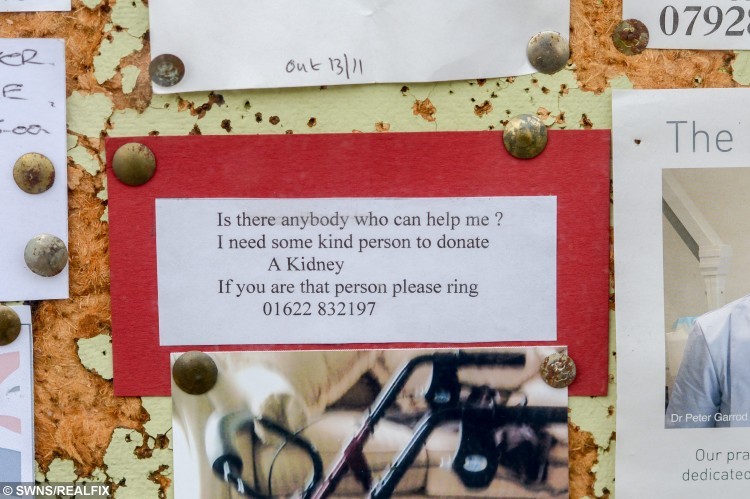 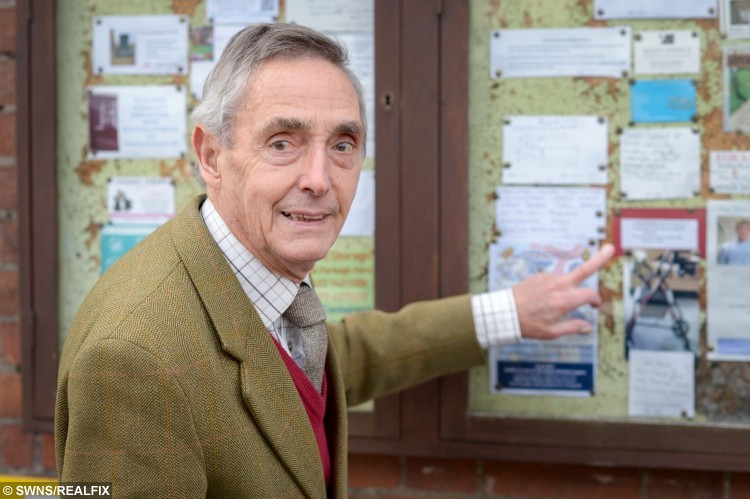 The note read: “Is there anybody who can help me? I need a kind person to donate a kidney.”

Dudley, from Marden, Kent, was told after a routine check-up at the doctors five years ago that he has a ‘smaller kidney’ which is affecting his body’s ability to clean his own blood.

He has been waiting for a kidney transplant for four years now and on two occasions was almost given one – but both fell through at the last minute, and due to his age he is not seen as a high priority on the NHS.

Dudley said: “A good kidney is supposed to work at 100 per cent but mine only works at 25 per cent.

“Ever since they found it, my doctors have been monitoring my condition every three months.

“At first it didn’t change but now it’s getting worse.”

“Everyone says to me ‘gosh Dudley, you look so well,’ and I feel well but they call it the silent killer.”

Dudley’s wife Ida, 80, was so desperate to help improve his life she offered up her own kidney.

She said: “We looked at our options and decided I would be his donor because we are the same blood group.

“But things changed when they told me one of my kidneys wasn’t doing its job, it was producing too much protein, so I couldn’t donate it any more.”

While Dudley, who was a member of the British Army as part of his national service, is on the kidney transplant waiting list, he is yet to find a match.

Dudley said: “Ida couldn’t donate a kidney to me and none of the family we know can help.”

The couple have five children, two grand-children and a great-grand-son between them from earlier marriages.

Dudley separated from his first wife, while Ida’s first husband sadly passed away.

They couple married in 1983 after meeting on a fruit farm where Ida worked and Dudley helped out.

He said: “Ida is the love of my life, all we want is some more time.”

“We had to make a decision about what next to do, so we said lets advertise.

“I typed out a note, printed it out and took it to the post office.”

They even had a response from a thoughtful man in the village called David, but the transplant sadly fell through.

Dudley said: “At first we didn’t hear much back from the ad, but after a couple of weeks, a man who we have known for a long time came forward.

“We know him well, and he was so excited to help.

“All of his life he wanted to do something like donate a kidney and was really excited it would be for us.

“So he went through the tests, and after he said everything is fine and things will go ahead.

“But he contacted who told us ‘I’m sorry we can’t use David’s kidney, it’s the wrong blood group.’

“He was really upset as were we but he is going forward with another donation but that doesn’t help us.” 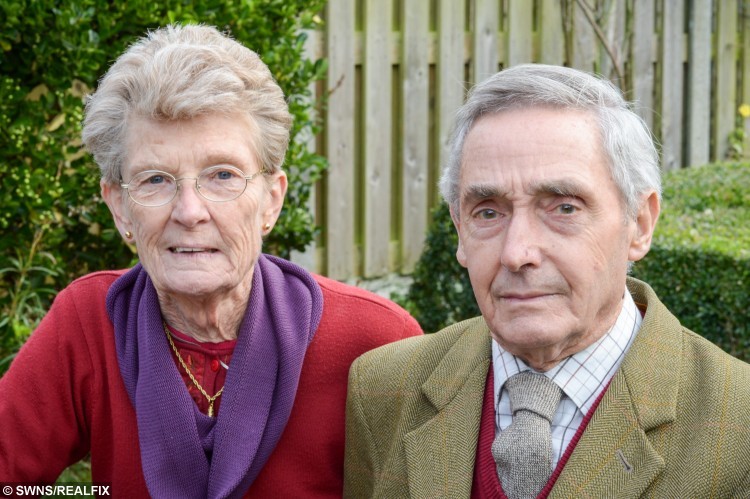 Dudley is now forced to have a fistula fitted this week to prepare his body for dialysis – which will mean a machine will clean his blood for him.

Ida, who is now an artist and creates calendars and cards to sell in the local village, said: “You wouldn’t know he is ill.

“We’ve been active all our lives, it’s because of this that we aren’t able to do as much because we’re always in and out of the hospital.

Dudley said: “Getting a kidney replacement will improve my life greatly, but I know why I’m not a priority.

“I just want some more time with Ida.” 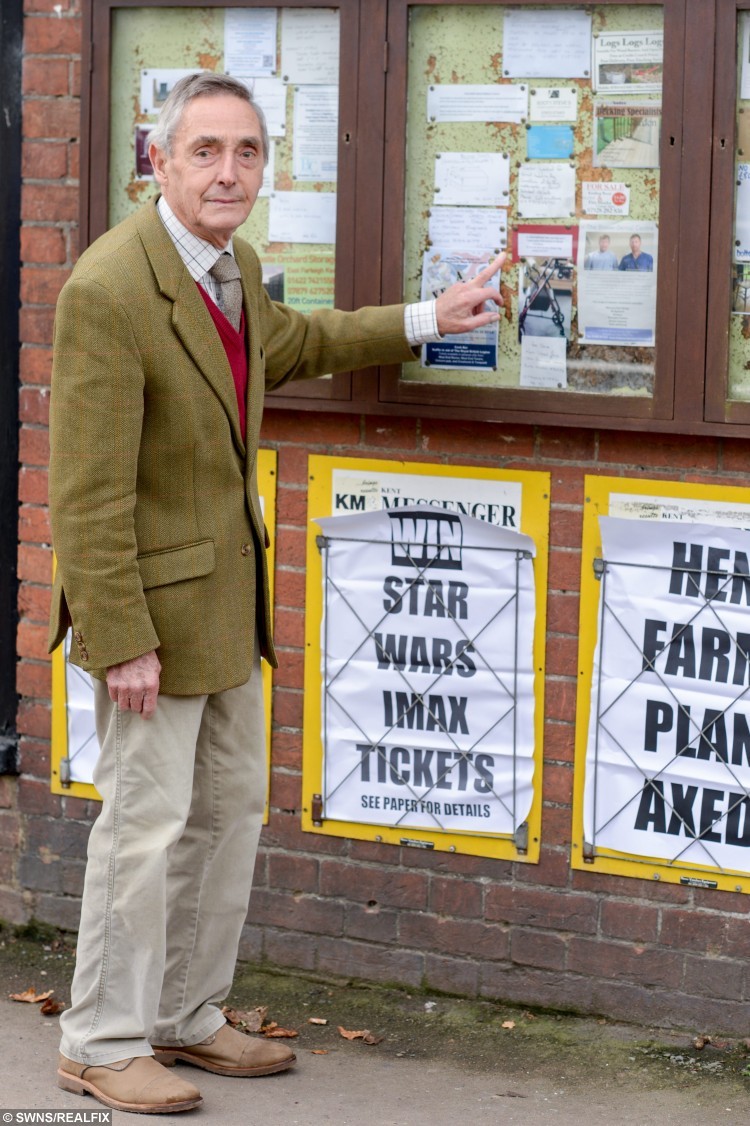