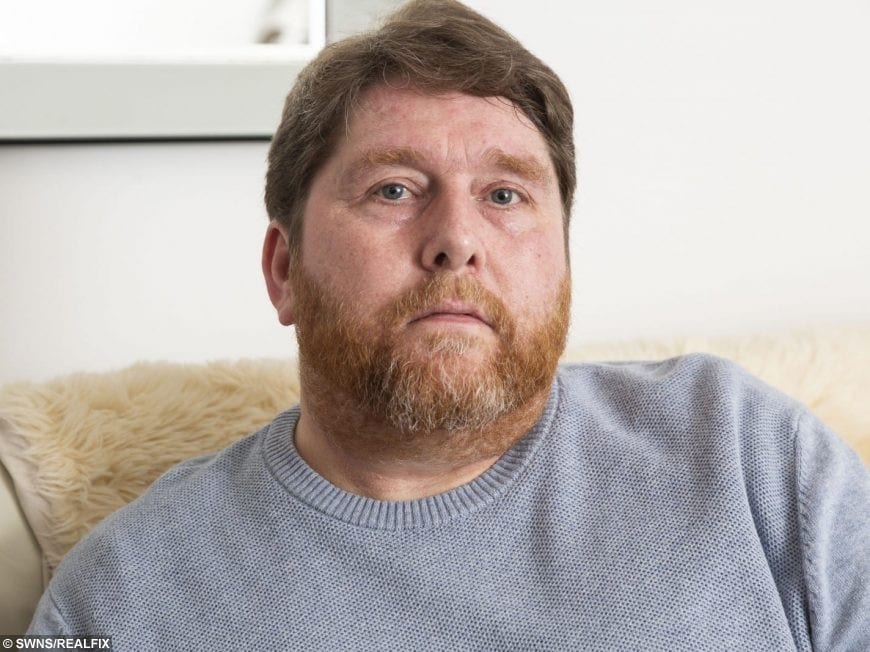 A shopper has told how he was almost ‘decapitated’ when the faulty door of a supermarket fridge crashed down on his neck ‘like a guillotine.’

Stuart Clegg, 53, was reaching for a pizza when an enormous 8ft tall glass door collapsed on top of him and left him sprawled on the ground in agony.

In the years since devastated Stuart has suffered from neck and back pain as well as losing the ability to move his left arm above his head – to “completely change” his life.

He says he has lost 80 per cent of the movement in his neck following the accident in 2016.

The divorced dad-of-four needs daily care from his mum in her 70s to carry out basic tasks like hair washing and cleaning the house, to leave him feeling “like a child”.

He has also been forced to give up work as a bookkeeper, after undergoing a number of “ultra intrusive” surgeries to treat debilitating nerve damage in his neck.

“The pain is so bad that I can’t do everyday things like carry a shopping basket,” he said.

“I can’t drive for a long at all because I get shooting pains in my neck, shoulder, arms and all the way down to my fingers.

“My mum has to come help me all the time. I’m an adult and I shouldn’t be like this.

“I have grandchildren and I can’t even pick them up or interact with them anymore because of what’s happened.”

The incident which turned Stuart’s life upside down happened at a Booths supermarket in the Lancashire village of Longridge, where he lives, on May 5, 2016.

The granddad-of-six says he was leaning into the fridge to get something when “all of a sudden” the glass door he had just opened came loose.

“It came down down on top of me and pinned me to the floor, I couldn’t move,” he said.

“I thought, ‘bloody hell what on earth has happened here?’

“You don’t expect to go into a supermarket and be floored by a fridge door – I was shocked and shaken up.”

Stuart said a number of staff members came to his aid and asked if he needed an ambulance, but that he was able to get himself up and off to hospital on his own.

“One worker there even told me the same door had fallen off in the past,” he said.

Although nothing serious was immediately diagnosed, the former book keeper says he felt crippling pain in his neck, back, arms and fingers in the subsequent months.

In the years since Stuart has had two discs removed from his neck and now he he needs to visit hospital every six weeks for nerve blocking injections to try and relieve the pain.

Stuart had initiated legal proceedings against Booths 12 months after the accident when an X-ray revealed he had a mild form of arthritis in his neck which he was unaware of.

He claims that, as a result of the diagnosis, the Booths solicitors argued the surgeries he later had were inevitable and the fridge incident merely accelerated the need for it.

The lengthy legal proceedings came to and end last month when Stuart reluctantly accepted £7,000 in compensation, after Booths accepted liability.

He claims the offer would have been nearer £100,000 had he not been diagnosed with arthritis in the time between the accident and a proposal being made.

“I feel like I have been poorly treated,” Stuart said.

“My pre-existing medical condition has been used against me but that had nothing to do with what happened.

“Beforehand I lived a normal life but now everything has changed – I can barely do anything for myself.”

A Booths spokesman said: “I can confirm that Mr Clegg unfortunately suffered an accident within our Longridge Store in May 2016.

“Subsequently Mr Clegg instructed solicitors to act on his behalf who brought a claim against the Company for which liability was admitted.

“As you are aware the claim was settled in the sum of £7,000 in full and final settlement.

“Whilst it was not necessary for this incident to be reported to the HSE, we confirm that the incident was investigated by the Ribble Valley EHO; they did not require the Company to undertake any further action following their investigation.

“It is of course most unfortunate that Mr Clegg suffered injury but we understand he settled this claim on advice from his solicitor and therefore this matter is now concluded.”