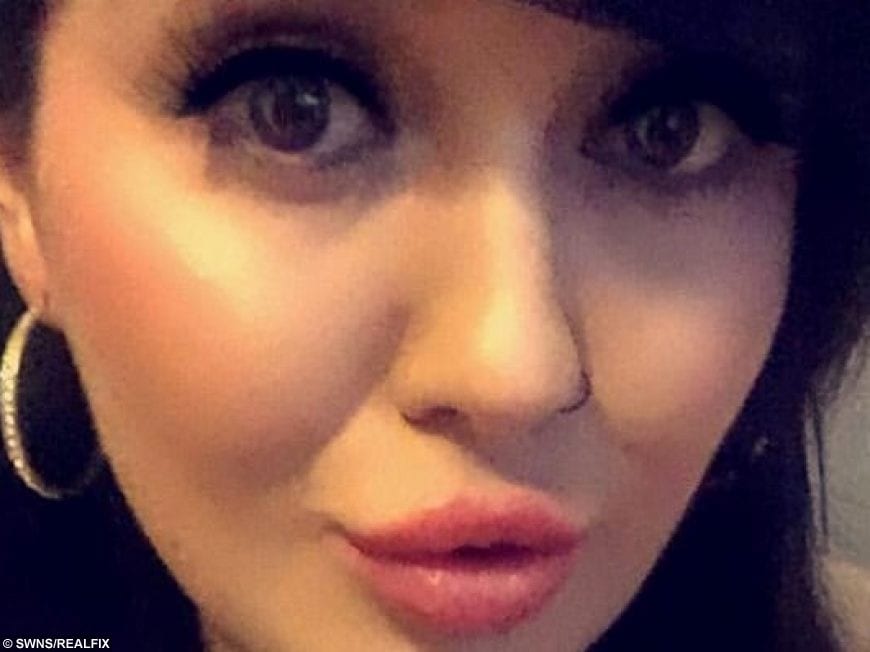 A glamorous young woman has told how her new hair extensions saved her life — when they helped her find her breast cancer.

Laura Larkin, 25, was running her fingers through her brand new brown 18in locks – which reached down over her chest – when she left a hard lump in her right boob.

Despite her young age, it turned out to be stage 3 cancer – and she had an operation to remove the lump.

But more than a year later – after being give the all clear – more lumps were uncovered in an equally unusually way.

The recruitment consultant was taking a shower when it malfunctioned sending boiling water flowing her chest, leaving her with agonising second degree burns.

And days later when she was changing her dressings she found another lump – with a scan later revealing two more cancerous masses.

Brave Laura from Livingston, West Lothian, Scotland, said: “The first time I found out I had cancer, it didn’t really hit me, it was dealt with so quick and I thought the cancer is gone, it’s over, I beat it.

“The second time was just totally different, it was completely devastating.

“I couldn’t help but feel like why me? Why have I got it a second time, it’s not fair?

“To lose a breast so young is so hard and at first I didn’t anybody knowing, I was scared of what people would think of me and what they would say if they knew.

“I soon changed my mind though because I thought if people did know, maybe they would check themselves and then hopefully I can prevent other people going through this themselves.

“As the lump was in a weird place under my breast, it’s not really somewhere that I would have felt it ordinarily if I wasn’t playing with my hair.

“Considering I was booked in for a lumpectomy within a week of them diagnosing me with cancer and it had already progressed to Stage 3, it’s scary to think what could have happened to me if I hadn’t found it when I did.

“I literally rang my hairdresser and told her that my hair extensions had saved my life!”

Laura had enjoyed having hair extensions of varying lengths for more than two years prior to her battle with cancer.

In early 2018, she had a new set of luscious brunette locks put in by her hairdresser at WeaveDiva – Hair Extensions salon in Bathgate, measuring at approximately 18 inches.

Laura had just got out of the shower at home in on May 28 2018 and was touching her hair extensions when she felt a lump in her right breast.

Laura said: “My hair extensions at the time were really lovely and were long enough to reach the bottom of my boobs.

“I’d just got out of the shower and I was running my fingers through my hair when I reached the ends of them and brushed past my breast.

“I felt this really hard lump which I’d never noticed before at the bottom of my right breast.

“I thought I was too young to have cancer.”

She went to her GP two days later, and while he thought it was fatty tissue, he sent her for a scan to be safe.

It uncovered abnormalities so a biopsy was done, and six days later she was diagnosed with stage 2 breast cancer.

“I was in complete shock,” she said.

“I couldn’t believe what they were saying.

Laura underwent a lumpectomy on July 6 2018 where doctors removed a 9mm lump from her right breast.

By the time doctors removed the lump, her cancer had progressed from Stage 2 to an aggressive Stage 3.

Doctors managed to remove the entire lump before the cancer had spread and Laura was told she would attend yearly mammogram appointments.

A mammogram in July 2019 showing no signs of the cancer returning, and Laura was getting back to her normal life after her scary ordeal.

She started at a new job at Blue Arrow Recruitment Agency and was just about to move house when disaster struck in November 2019.

Laura was taking a shower at her partner’s mum’s house when the shower suddenly malfunctioned, sending boiling water all over her chest.

She said: “I climbed into the bathtub and noticed the water was trickling down the back of the shower head rather than coming out normally.

“I took it off the wall fixture to have a look and suddenly the hose completely separated from the shower head, throwing boiling hot water at the bottom of my breasts.

“I screamed out and jumped back out of the bath, and the skin on my boobs was all red and hot and sore to touch.

“I put some cream on it and thought I’d be ok, but the next day my skin was blistering and starting to fall off.”

She went to St John’s Hospital in Livingston and she was later treated for second degree burns and told to change her dressings herself at home.

As she placed a new dressing over her right breast, six days later on December 7 2019, Laura was stunned when she felt another lump.

Laura said: “I was in total shock – I thought I’d beaten cancer, the mammograms were coming back clear and I thought I was going to be ok.

“I felt this lump and my heart just stopped. I knew the cancer was back.”

Her doctor thought it was scar tissue from her lumpectomy, but scans revealed there were three new lumps.

Gene tests revealed Laura was carrying the BRCA2 gene from her mother’s side – commonly known as the breast cancer gene.

Doctors advised that Laura would need to have a single mastectomy otherwise the cancer could spread or come back again and she had the surgery to remove her right breast on January 17 2020.

Tests have shown the cancer has not spread to her bones or vital organs but Laura has to wait until February 5 2020 to find out if it has spread to her lymph nodes.

She will have chemotherapy and radiotherapy before reconstructive surgery.

Laura said: “I knew that having the mastectomy was the best option for me but it really has affected my confidence.

“I looked in the mirror after my mastectomy and I was horrified – tears were just streaming down my face, I thought I looked disgusting.

“I’ve lost my breast so young and I’ve been left with this awful ugly life changing scar.

“I can’t have reconstructive surgery until all of the chemotherapy and radiotherapy is done as the treatment would damage the implant, so right now I’m just waiting.

“I haven’t been able to be intimate with my partner since I was diagnosed for the second time, I just don’t feel like myself at the moment.

“If sharing my story makes other women check their breasts, then maybe I can prevent someone else going through what I’m going through and save them from this pain.”

« Previous post ‘Single? Date Mark’ - Single Man Bought Massive Billboard In An Effort To Get A Date
Next article » "It Was So Exciting To Walk Into The Estate Agents & Buy A Place Outright!' - Mum Turned Down For Mortgage Wins £250k A Week Later