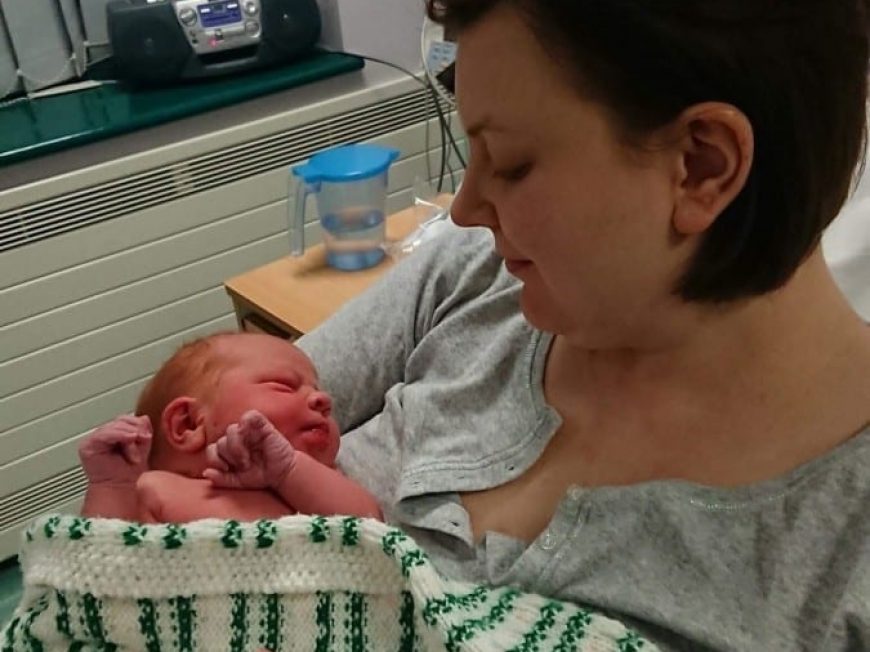 ‘What do you fancy for dinner love?’ my husband, Steve, 36, asked as we walked around the Marks and Spencer’s food hall.

‘For once I actually don’t have any cravings,’ I laughed, stroking my giant bump, now two days overdue with our second child.

Waddling alongside Steve as he pushed our son, Seb, now four, in the trolley, we went up and down the aisles browsing for something to hit the spot.

‘Ooh pie!’ I pointed, knowing the buttery pastry and creamy filling of a chicken, leek and ham pie would do the job.

‘Hopefully this’ll fill you up so much there’s no room for that baby anymore!’ joked Steve.

Picking up some chips and token vegetables, we headed for the checkout, and I hoped he was right – I couldn’t cope with this much longer.

Steve and I had been married just over a year, after having Seb in February 2015.

Seb’s pregnancy was fairly straightforward, but he arrived three weeks early, so this time round we made sure we were extra prepared.

I went on maternity leave from my job as an accountant on February 8th 2018 and my due date was March 1st – I wanted to be ready if this one came early too!

It had given me the perfect time to spend with Seb, getting him ready for the little brother or sister that was on their way.

‘Can we read Pirate Pete Becomes a New Big Brother again?’ Seb asked for the third day in a row.

The book was great in helping him understand what was going on, and he couldn’t wait for the baby – who he was convinced was a girl – to arrive.

On February 11th, I started to have contractions, so we rushed to Hull Royal Infirmary, sure the baby was on it’s way.

‘Sorry Mrs Hirst, false alarm,’ the doctor said after she’d checked me over. ‘The baby’s nearly there though, so as soon as they’re in position it’s going to be a quick one.’

Driving home, I wondered how long it would be until we got to meet our little one.

The days rolled by, and before we knew it, it was two days after my due date and we were on our way home from M&S.

Pulling up on the drive, the baby’s bag ready in the car as it had been for over two weeks now, I sighed : ‘It’ll happen soon, won’t it Steve?’

I felt just about ready to pop and was convinced labour was just hours away.

‘Let’s drop Seb at your mum’s for the night so you can have a nice long bath and we can be ready to rush off to the hospital if we need to,’ Steve said – he always knew what to say.

My mum Jenny, 64, lived a two minute walk away from our home in Hull, so after waddling there and back, I popped the pie and chips in the oven and jumped into the bath for a long soak.

I’d been having contractions for the last couple of days and as I lay there they began to get stronger.

‘The same happened with Seb, there’s no hurry,’ I thought to myself.

I waited for over 12 hours before he arrived because we got to hospital too early – I wasn’t going to make the same mistake again.

Heaving my body out of the bath as I heard the oven timer ping, I couldn’t wait to tuck into dinner.

I wrapped on my dressing gown and sat down at the table, the shortcrust pastry crumbling under my knife and creamy sauce spilling onto the plate.

‘This is just what I needed, thanks love,’ I smiled, reaching over my bump across the table to hold Steve’s hand.

Just as I finished my last mouthful, I got the feeling I’d been waiting for – the baby was on its way, and this time for real!

‘Could you get me some clothes, I can’t go in my dressing gown?’ I asked Steve as I popped into the downstairs toilet for a quick wee.

But it wasn’t a wee I needed, and as soon as I sat on the toilet I realised the baby was coming – there and then!

‘Steve!’ I shouted, as I slid onto all fours on the toilet floor. ‘Come quick, it’s happening.’

My water’s hadn’t broken but I knew the feeling well enough, the contractions getting closer and closer and a sudden urge to push.

Steve called for an ambulance and then for the midwife who talked us through everything.

‘I can’t believe this is happening,’ I said through heavy breathing. ‘Please say this is a dream and I’m going to wake up soon?’

Steve remained calm and completely factual, an absolute rock as I tried not to panic.

The sack of waters bulged first and before our eyes, so did our babies head.

‘She looks like she has a space helmet on!’ Steve said to me and the midwife, who was on speakerphone.

Our little girl, Matilda Imogen, was born inside the amniotic sac, which soon burst once Steve had helped her out.

Although we were too busy to be looking at the clock, we worked out that her time of birth was 7.05pm on March 3rd – just 19 minutes after I’d finished my pie!

The ambulance arrived two minutes later, checking me over and taking Matilda and I to Hull Women and Children’s Hospital, East Yorkshire, while Steve followed behind in the car.

Weighing 7lbs 15oz, the doctors declared she was perfectly healthy, and just a speedy little thing.

Mum and Seb came to visit first thing the next morning, and I’ve never seen him more excited.

‘Please can I hold her?’ he smiled, the love for his little sister already apparent in his big brown eyes.

As Steve and I watched him delicately kiss her on the forehead, a tear ran down my cheek – our little family was now complete, despite a very dramatic delivery!